I left my heart in Bratislava

One coincidence that I have noticed these years is that my favourite destinations in Europe and some of the most memorable ones all start with the letter “B” – Bordeaux, Brussels, Barcelona, Bologna…and now, I arrive in Bratislava. From Vienna, it was a choice between Bratislava, Prague, and Budapest as a day trip, but it was not much a choice at all as Bratislava is the closest one and doesn’t take too much time to reach. An hour by bus and you jump conveniently from Austria to Slovakia.

It took a while to get to this post, but I’m glad I’m finally writing about Bratislava three months after the visit. Somehow, unexpectedly, I left a piece of my heart in this blue, melancholic city. 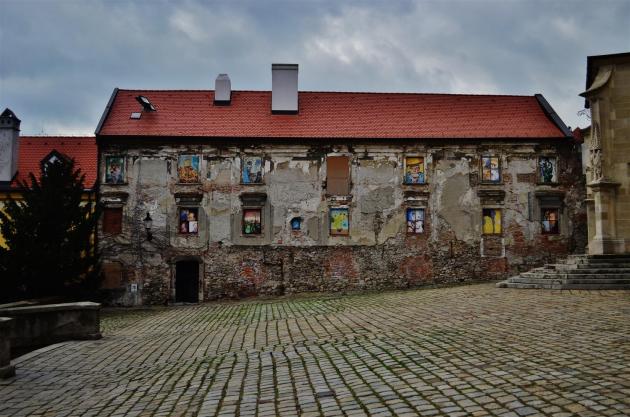 Slovakia is perhaps the second most mysterious (if not the most mysterious) country I’ve visited, next to Latvia. First impression of the old town: some areas were tattered with an air of sorrow, and strangely, it attracted me. A friend once told me that I gave off a strong aura of pensiveness with a touch of sadness surrounding me. Is this my “style”? 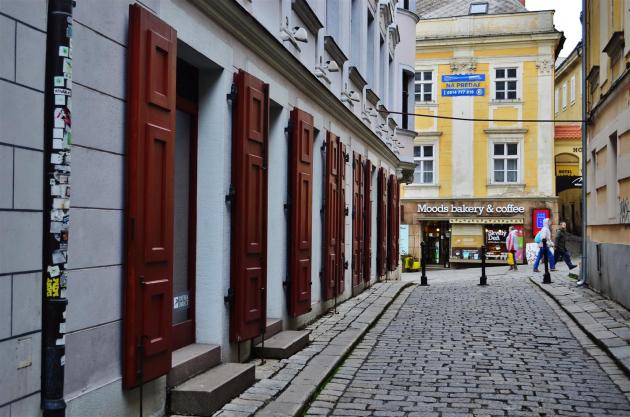 I navigated through the streets and alleys of Bratislava in search of the many statues that the city is known for. Specifically, I was looking for “The Paparazzi”. I found the exact intersection where it was supposed to be but the statue was…missing. Maybe I got the wrong place, I thought, and so I searched carefully every corner until I was sure that The Paparazzi was nowhere to be seen. I later found out that the statue had been removed when the restaurant (also named Paparazzi) beside which it stood had closed down. Oh boo. What disappointment 😦 I guess it was better knowing it was gone for good rather than finding out that I actually didn’t find it. 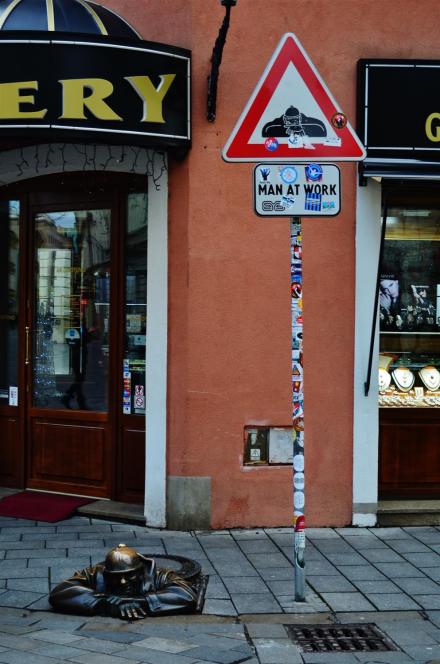 Aside from The Paparazzi, somewhere in the city dwells Čumil, otherwise known as “The Watcher”. Oh, there you are! Glad I saw you there before I stepped on your head! Čumil had been the victim of unfortunate encounters before, as he had lost his head TWICE due to unsuspecting (or careless?) drivers. Ouch. So now he has his own unique traffic sign standing beside him – watch out for The Watcher! 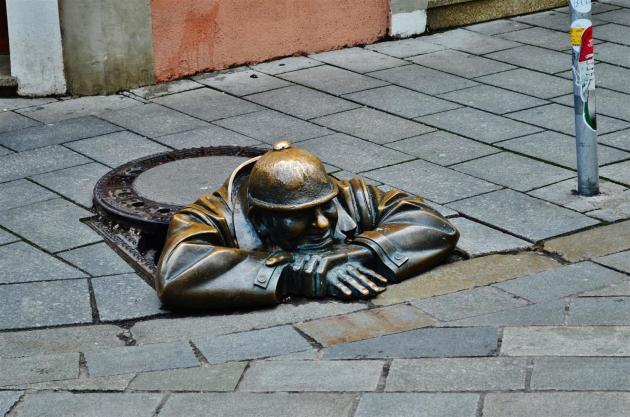 I wonder what Čumil is up to though…what or who is he watching?! Maybe he was working underground and just decided to pop out for a short break, or maybe he was a stalker, even a detective…OR, maybe Čumil himself is the real paparazzi! What impeccable style, though – I guess Čumil would do anything that is necessary for his profession 😛 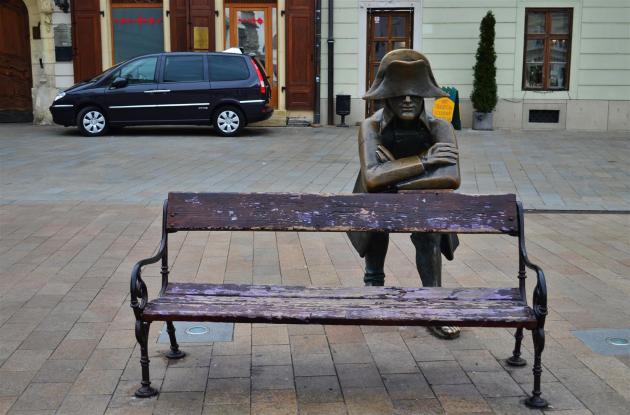 After The Watcher, I found Napoleon’s Soldier hanging out at the city’s main public square, Hlavné námestie. According to some research, “Napoleon’s armies attacked Bratislava twice and Napoleon himself has visited the city in 1809. The legend says, that a wounded French soldier called Hubert fell in love with a nurse from Bratislava, decided to live here and started to produce a sparkling wine based on the French tradition. Hubert is now the name of the most famous Sparkling wine in Slovakia.” 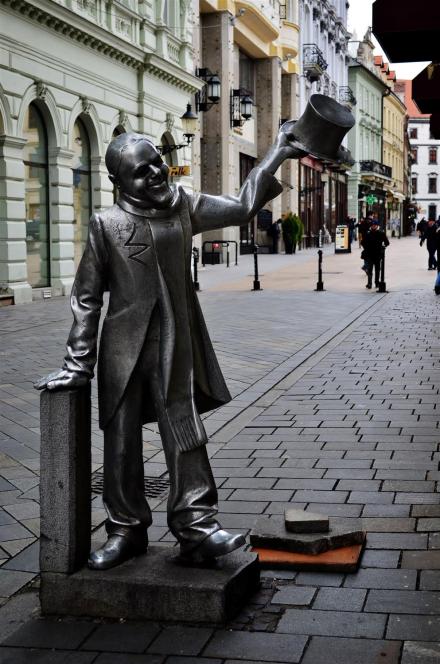 The third statue was that of Schöner Náci, a well-dressed gentlemen greeting visitors passing by. Aside from these three more well-known statues, I found a few other strange ones while strolling around, including a red bear, a snake wrapping itself around…something, and a dancer performing on a ball. I wouldn’t be surprised if I’ve missed many more though. 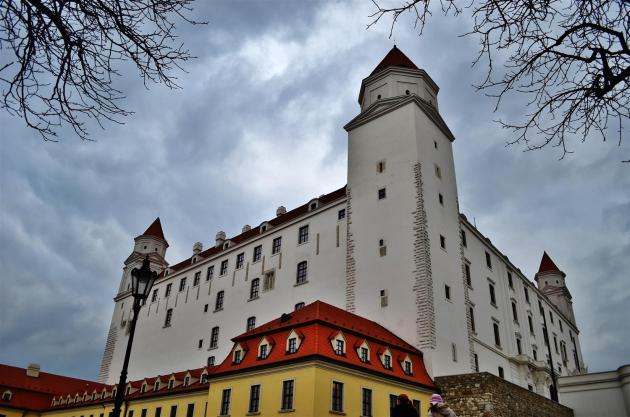 I made my way to the other side of the city in search for my next destination, the Bratislava Castle. I was almost convinced that I got lost since I kept going uphill and didn’t see anything that resembled a castle for what seemed like ages. There was only one road, and I was going the right direction, so I continued in hopes that it would be further up. Indeed, the castle finally appeared. By no means a grandiose or extravagant site, the castle overlooks the Danube river and offers stunning views of Bratislava, both the old town and the modern parts of the city, from above. 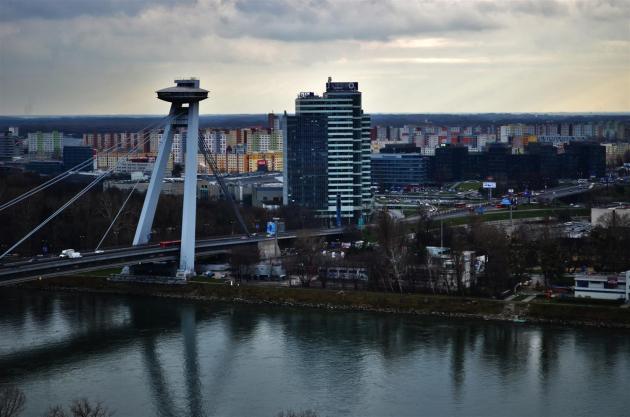 While the old town is situated to the north of the Danube, the south side of the river is more modern and densely packed with housing estates. The building blocks in a distance are part of the Petržalka housing estate, apparently the largest communist-era concrete block housing complex in Central Europe. At a glance, the two sides of the river reveal a stark difference between the older and newer parts of the city, 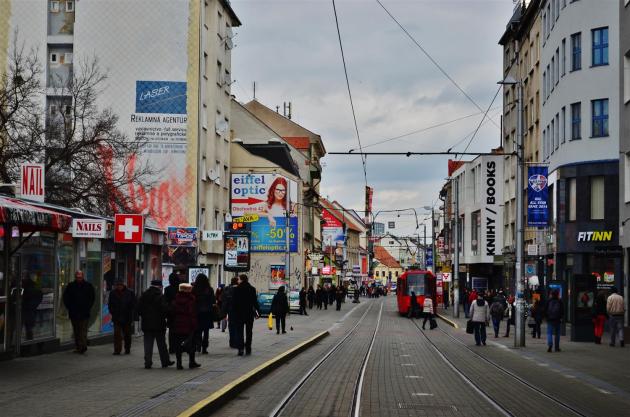 Back in the old town, I stumbled upon an area that reminded me strangely of downtown Toronto. Yet again, I felt that air of sorrow that I had mentioned before, as I was walking pass the people on the streets. The city encompasses a simple word – blue. 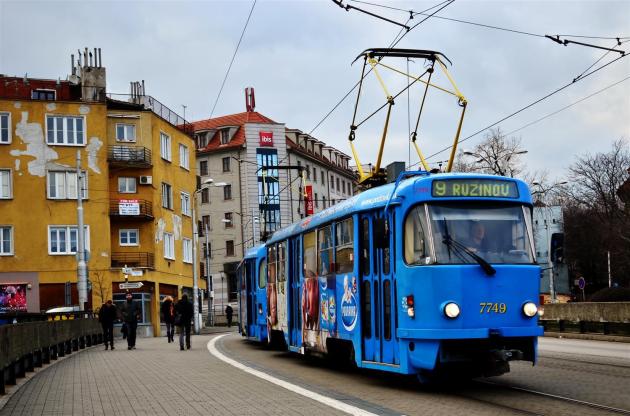 And it wasn’t just because of the many blue things that I happened photographed during my half-day in Bratislava – the Blue Church, the “Blue” Danube (river), and this blue tram on the street. Perhaps the bluest of them all is the city itself, which gave me a melancholic feeling of…blue. I don’t know if it’s the city in general, or just the atmosphere of the particular day that I was there. Why are you so sad, Bratislava? 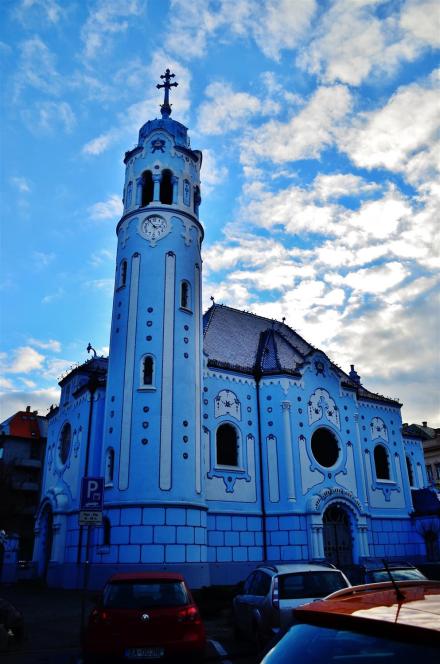 The Church of St. Elizabeth is known as the Blue Church for more-than-obvious reasons. The true colour of the exterior is closer to a pastel or baby blue, but somehow this photo made the shade of blue look a lot more intense. Maybe the complement of the blue sky gave it some sort of effect, adding a new layer of blue to this already blue city. 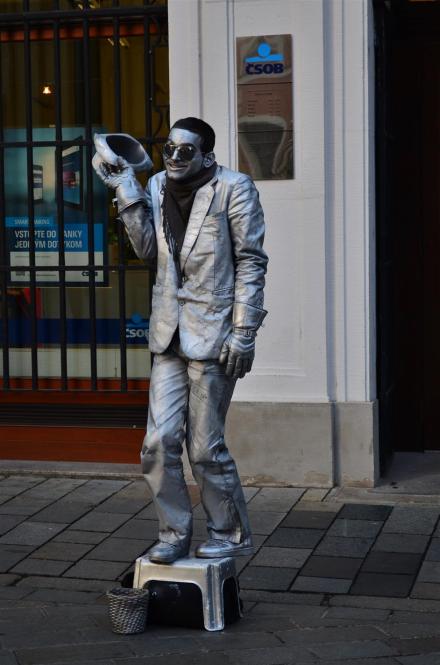 I still haven’t explained why I left my heart in Bratislava. I guess it would be more accurate to say that I gave a piece of my heart to this street performer, who caught my attention right away. He was idle, still as a statue that I thought he stood there all day doing nothing. But then he moved. He was like a little clown seeking for attention, even affection maybe, as he interacted with the passersby that stopped to look at him. Oh, the way he made them smile and laugh with his wordless facial expressions and funny tricks – it was more than just entertaining. He even kissed a girl! It was love at first sight – maybe second, maybe third, because I kept going back to watch him, though I pretended not to notice him and only watched from a distance. Secretly, though, he made me smile each time, and I gave him the name “The Seducer” because that was exactly what he was, a mysterious man that somehow seduces each person that was his audience. And they were willingly seduced! Bratislava lost its paparazzi, but in return, The Seducer is there, bringing joy to the visitors.

After a bit of contemplating, I went up to him, looked him in the eye, and gave him a genuine hug. As I hugged him, he gave me a big smile…but with a tint of sadness (or maybe I was imagining it?) Then I ripped out a piece of paper and wrote, “Thank you. You made my day. Love from Canada ❤ " (even if I don't know if he spoke English) and dropped it in his little basket with some coins. I was telling the truth when I said he made my day as he was the best part of my stay in Bratislava. Even after leaving the city, I kept thinking about this "Seducer" and his performances, wondering all at the same time what he looks like and what his voice sounds like. Being a street artist, it must be hard to entertain all of your guests, no? Are you happy? Are you lonely? You bring joy to your audience for such a small amount of money, even in the cold. And you yourself, are you happy?

And really, it's moments like this that make travelling all worth it, doing these small things. The feeling is so guiltily satisfying. The smile, the hug…I don't even know what he looks like. Words can lie but eyes can't. I couldn't see his eyes, but he could see mine. Did I not love you? And that was how I gave a piece of my heart to the street performer in Bratislava… 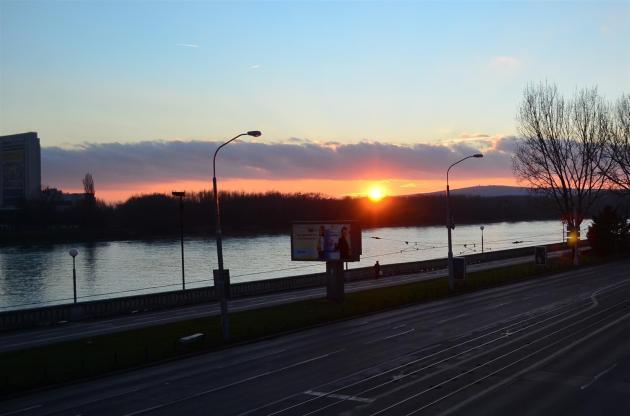 I turned away from The Seducer and headed to the bus station by the river, still pondering about the life of the street performer. What I didn’t expect was to be perfectly on time for the sunset over the Danube!I remember the last time I chased after a sunset was in Riga, and I didn’t make it before the sun completely disappeared from the horizon. This time, however, I ran onto the New Bridge and was not a moment too late to see the golden globe sink into the distance. Oh, it was such a beautiful goodbye gift from Bratislava. 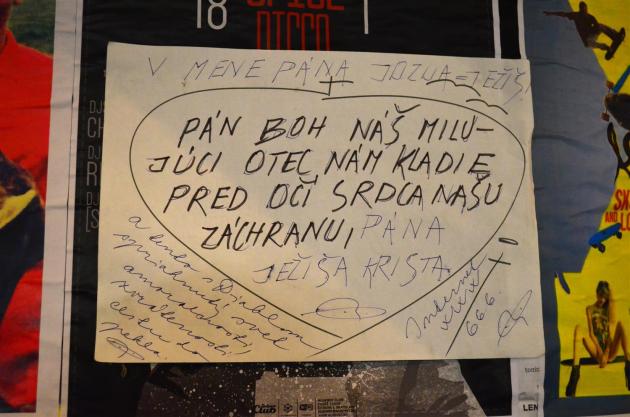 Before I left, I snapped a photo of a sign posted near the bus station. I could only assume that it was written in Slovak. An attempt at using Google Translate actually gave me a semi-coherent sentence, but if anyone can translate the whole thing for me, please leave a comment!

13 responses to “I left my heart in Bratislava”