Budapest, Pearl of the Danube

Just a note before the actual post begins: Almost a whole month without a blog entry… 😦 Seems like the new life in Glasgow has kept Annie quite busy. As a result, I’ve decided to try a different way of blogging, focusing more on imagery than on words, which often take more time to formulate than I could afford. After all, a picture is worth a thousand words. I do want to keep up with the blog, but it simply takes too much time to write, and so I will compromise. There will still be text, but the descriptions won’t be as elaborate as those in previous entries. Of course you can click on the images for the full view and a short caption of each. I hope you will still enjoy the photos 😉

Budapest, another city whose name begins with the letter “B”. If you didn’t know, I tend to end up liking cities beginning with “B”, for the most part – Bordeaux, Bologna, Brussels, Bratislava, Barcelona…Bruges is the exception. Though it is all coincidence, I couldn’t shake off the feeling that Budapest deserved to be visited with high expectations. Aside from the fact that it is yet another city beginning with the letter “B”, I’ve heard nothing but good things about this Hungarian city from my friends who have been there. (Come to think of it, it was the same with Barcelona.) So then, this was Budapest… 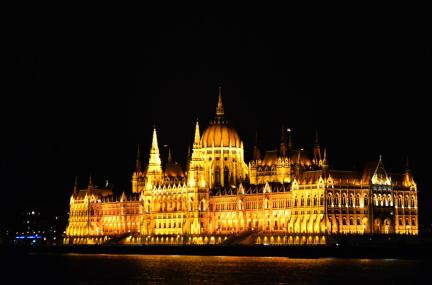 Prague had a castle; Budapest had a castle. Prague had bridges; Budapest had bridges. Tell me then – how could I not compare the two cities when I had just travelled from Prague to Budapest? Sorry to fans of Prague but Budapest beats Prague in night scene, hands down. Charles Bridge, you have nothing on the Chain Bridge in Budapest ❤ And the parliament building – need I say more other than that it was one of the most stunning structures I've seen? 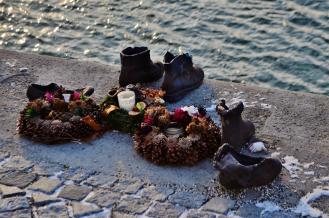 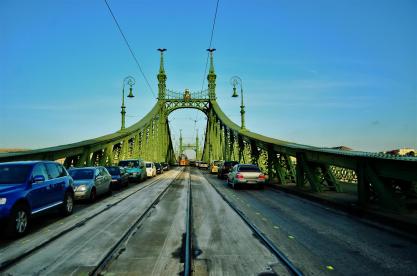 The Chain Bridge was impressive, but I liked the majestic green bridge (not sure what its real name is, so it’s just the green bridge to me) much more. Further along the Danube, by the parliament building, sat the statue of Attila József, a Hungarian poet in the 20th century. At -7 degrees Celsius, it was a chilly day to take a walk along the Danube, but not as chilly as the story behind the “Shoes on the Danube Bank”. The monument, commemorating the lives lost on the bank of the Danube during World War II, reminds all passersby of the terror of the day when Jews were ordered to take off their shoes and were then shot, falling into the Danube and disappearing in the water.

A hike up Gellert Hill was inevitable for someone like me who loves viewing cities from high places, and it was especially refreshing in the morning. All was calm, and I think there was a split moment when I realized…wow, I love Budapest. I can’t pinpoint an exact reason, but there was something about this elegant city, or maybe it was everything about it, that made me fall in love with it instantly (the moment I saw its night scene) and also gradually throughout the three days of my visit. You got me, Budapest…you got me.

As I was in Budapest during Christmas time, I wouldn’t miss the Christmas markets for the world! The meat-based Hungarian was a bit overkill even for me, hah! Worth special mention is the sausage and red cabbage combo, which looks like the most ordinary street food ever but turned out to be the most delicious thing I ate in Budapest. 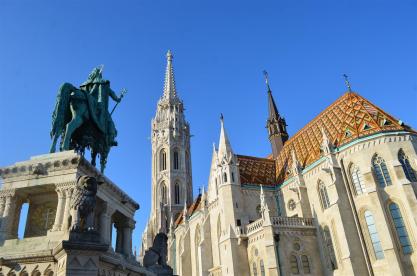 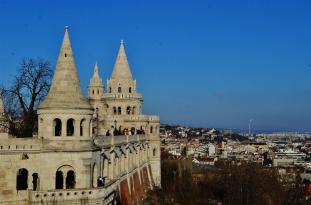 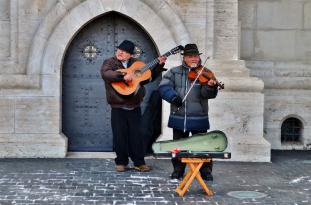 I almost missed the Fisherman’s Bastion because I knew nothing about it and somehow missed researching this place, which would have been a huge regret if missed. In fact it became my favourite place in Budapest because of how unique it turned out to be. I had to say kudos to the two adorable musicians that I met that morning, who gave me the most genuine smile as I dropped some coins in their bag. Their voices were coarse and maybe the violin was slightly out of tune, but it was the joy and authenticity in the Hungarian folk songs that they so happily performed that made my day (a very cold day!) Thank you for the music, my dear friends, for the songs that you were singing!

So I enjoyed Budapest. In fact it has become one of my favourite European adventures, another “B” city. Sometimes you love a city not because of how beautiful it is, but because of how it makes you FEEL. (In this case, Budapest is beautiful too.) Maybe somehow, Budapest has touched my heart, somewhere deep within, and that is the truest way to experience a city. Someday, I will be back.

4 responses to “Budapest, Pearl of the Danube”