Leave a comment Posted by Annie Bananie on August 27, 2021

A couple of days ago, I happened to review the “plant nutrition” section of the IGCSE biology textbook. At this very moment, with the rich spring foliage in front of my eyes, I imagine the layered cellular structures within each leaf, full of chlorophyll, undergoing photosynthesis to maintain life. I cannot see a single chemical reaction with the naked eye, yet I cannot help but gasp at the exquisite design of the Creator of Life. Observing and immersing in the world with such perspective, everything suddenly becomes wonderful and admirable ❤ 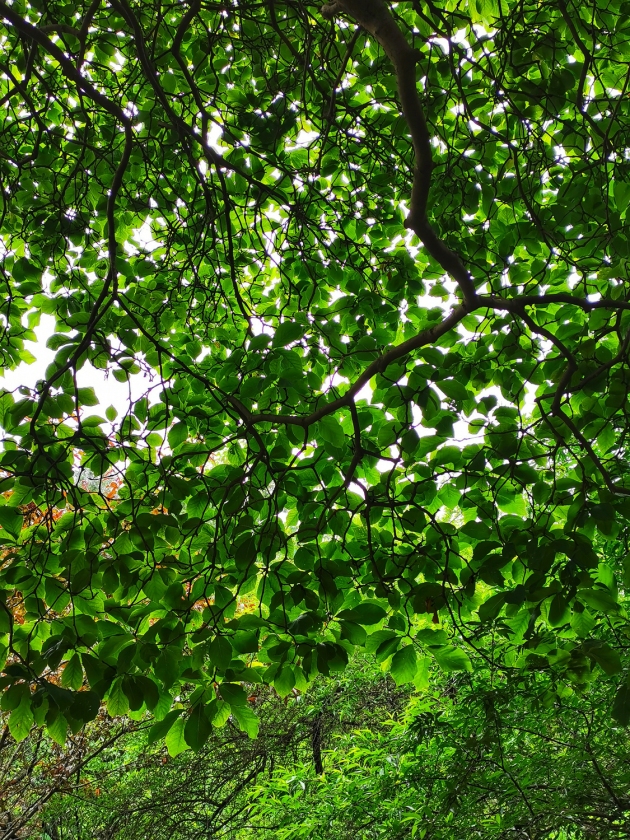 Lush green foliage, full of the wonders of life

Leave a comment Posted by Annie Bananie on July 9, 2021

Oh man, it’s a week into July and it’s HOT HOT HOT! The AC is my lifesaver (sorry environment 😦 ) and I’m rarely sweatless when I’m out. I’m now fully on summer holidays, which started in mid-June and will last till the end of July. Then in August I start full-time work, so I’m fully enjoying my time off without reserve. Let’s see what I’d been up to in June 😉 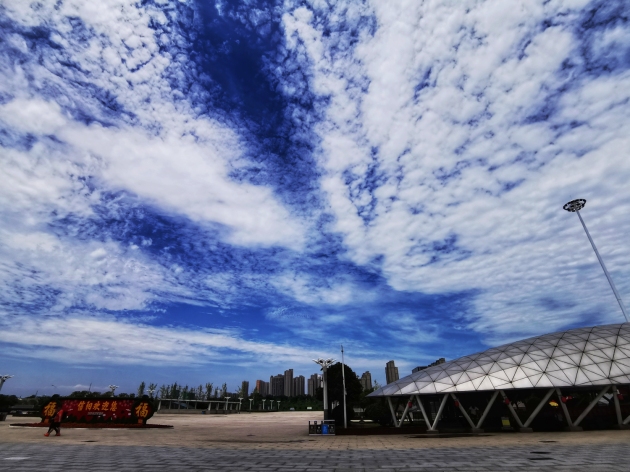 Starting off with some nice sky photos – it’s been a while since I’ve seen such beautiful azure with magnificent cloud formations. This one was taken at Xinyang train station, during a short weekend trip.

Here’s one right at home, as the sun was setting. Lots of people were getting out their phones to take a photo and I could understand why – it’s been one of the rarest sights of the year so far!

More cloud formations at dusk, by the East Lake in Wuhan. 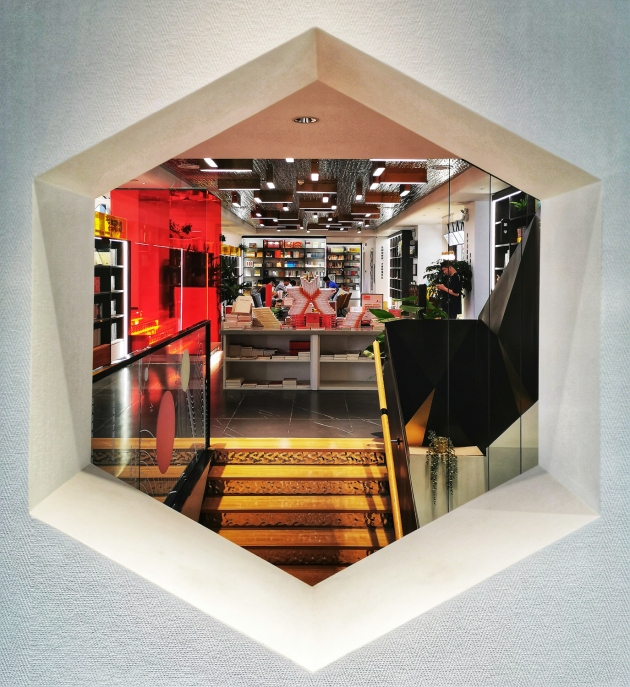 Looking through a hexagonal hole in the wall (literally) at a bookstore, where I was studying for the afternoon. 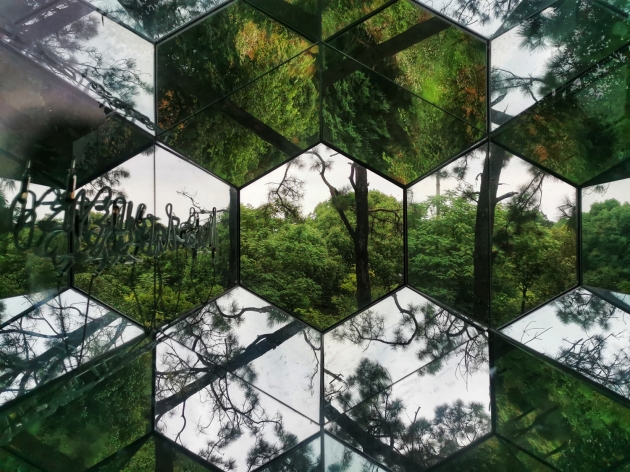 More fun with hexagons! This was a piece of art exhibition showcased at a private contemporary art gallery in the East Lake area in Wuhan. The hexagonal glass patterns reflect the natural backdrop and though it was cloudy that day, the shapes and colours created a mesmerizing display. Really liked this one! 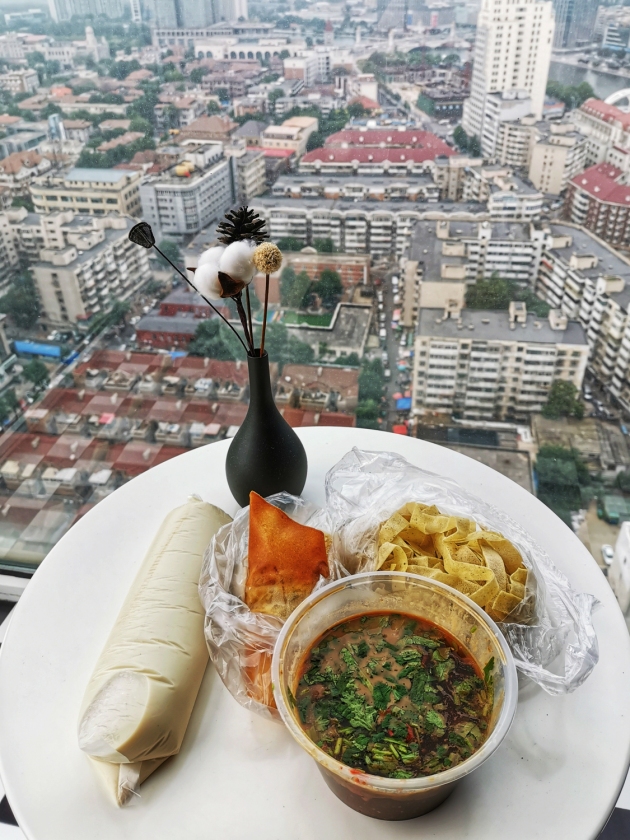 Breakfast in Tianjin overlooking the city on the 31st floor, where my hotel was located. This was a traditional meal of local breakfast items including green bean flour strips dipped in sauce, a thick spring roll, a roasted bun (hidden behind the plastic bowl), and a gigantic bag of soy milk. All this for 10 RMB (<$2 CAD)…what a fantastic start to the day!

For something more heavy, here we’ve got the spicy oil-steamed crayfish, which is super popular in Hubei province during summer time. It takes quite a bit of effort to eat and does get messy but is almost an obligatory rite for everyone in Wuhan during the summer season.

Figurines of cats dancing in unison, yup. There were displayed at a bubble tea shop and I could have taken them all home with me along with my tea… 😛 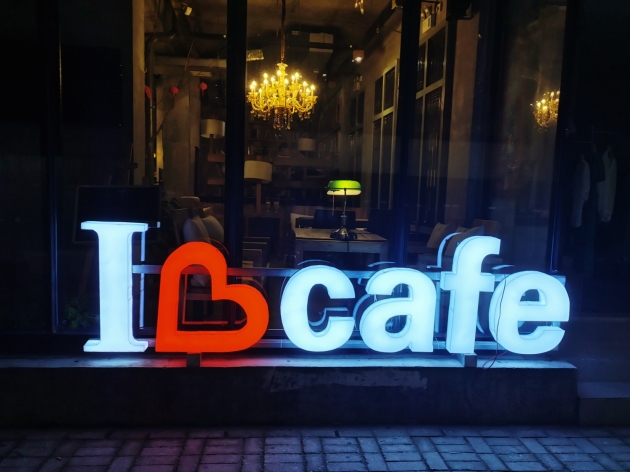 And yeah, I do ❤ cafes and I try to go to local ones instead of large chains as much as I can. Great place to chill, study, read, have a drink, chat, or just sit and do nothing all afternoon…

Finally got around to posting this entry after much procrastination – haven’t used this word in a while. Happy summer, and remember to bring sunscreen!

Leave a comment Posted by Annie Bananie on June 4, 2021

May has been a time for me to rest and reflect as I transition between jobs. I quit my old job at the end of April and will officially start full-time in August as a biology teacher at an international school in Wuhan – bet not a lot of people saw that coming 😛 In May and June I am working part-time and am only obligated to be present at the school on Mondays and Tuesdays. However, I am still working to prepare for teaching on the other days, but my schedule is extremely flexible. That’s why I had been able to visit some restaurants and coffee shops that have long been on my to-go list, and even travel a bit outside of Wuhan. Days like this won’t last so I’m cherishing and enjoying them to the fullest before I return to full-time work. Here’s May! 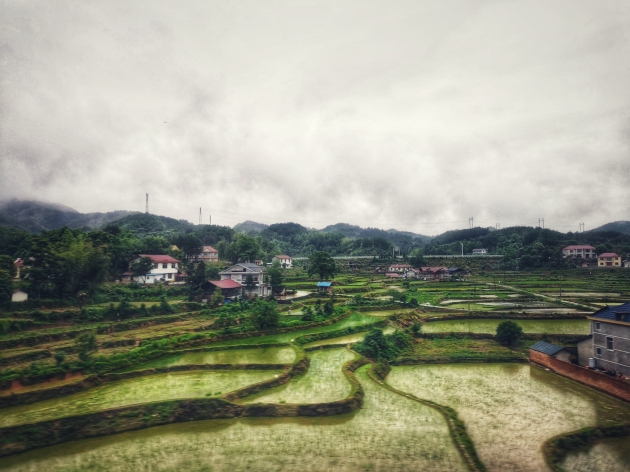 I will always try to get a window seat on a plane or train ride and this is why – the views speak for themselves. The high-speed train from Guiyang (a post to come later) to Wuhan passes by countless mountains and villages, and this stretch of rice terrace had to be my favourite scene during the 4.5-hour trip. 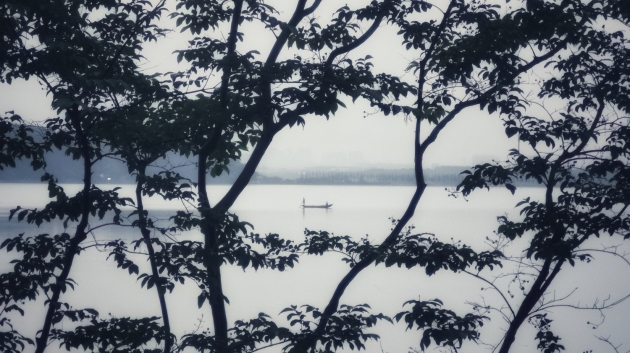 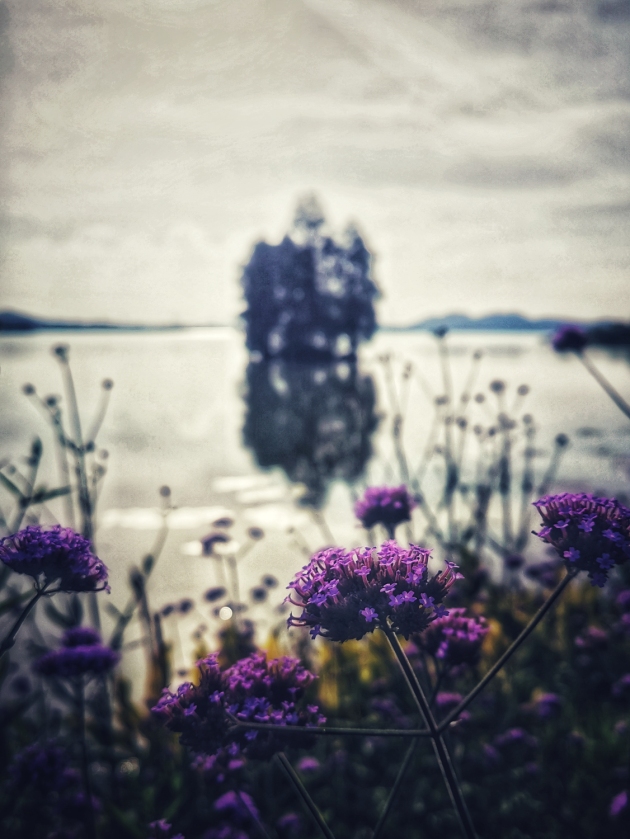 …or cycle a couple dozen kilometers. The end of may already saw some 33-degree weather so this might be my last cycling trip for awhile, unless I’m crazy enough to brave the summer heat waves!

Donut art, random encounter during a supermarket visit. I don’t particularly like donuts as they’re too sweet, but here they look like they might as well be in a museum! 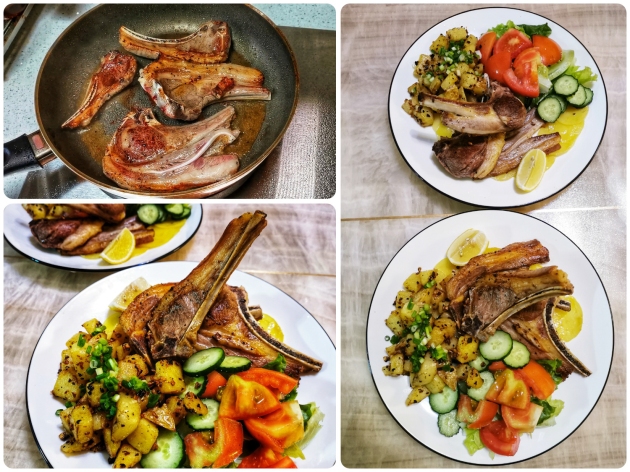 Lamb chop time! Jian and I had been intending to make lamb chops at home but it only stayed an intention until two weeks ago, when we finally made it happen. Well I did the cooking and Jian helped with devouring it, heh. The lamb chops were first pan-seared and then baked in the oven. Side dishes included q colorful salad and some garlic-sauteed potatoes. May I give myself a 12/10 for this, please! It looked fantastic, if I could say so myself, and tasted so delicious!

Animal friends at a cafe that I frequented during my free afternoons in May. Why cats in any form have gone viral is anyone’s guess…

I’ve seen a couple of these ducks lurking around the neighbourhood recently. The English says “I am very busy” but the Chinese tells you what he’s busy doing as it translates to “busy making money”. Well played, Mr. Duck, well played.

This photo was taken by Jian, presumably one day during lunch break, and I just had to steal it and post it. It was a simple snail but I love how the image was super clear and the details came out so sharply. I do have to admit that lately my husband’s photography skills have improved greatly and they indeed deserves applause.

Finally, a real animal friend, our beloved Shanshan. I suppose I answered my own question about cats going viral – how could they NOT??!!!

I’ve been loving my coffee shop afternoons and in fact I’m sitting in one as I write this. I guess coffee culture has become a fad in many parts of the world and though I know nothing about good coffee, I do find it delightfully pleasant to work or chill in a nice coffee shop (with a reasonable purchase, of course). And here comes June with the summer weather – I’m not ready for this yet!!!

In the last post, I posted about some random encounters during a short visit to Nanjing, but I would say that Nanjing is perhaps most dazzling during the evening, when it is adorned by colourful lights everywhere. It is therefore necessary to present a second part in the “Nanjing encounters” series, focusing on life in the city after dark.

Lanterns of upright drums lining the path that leads to the ancient city wall up ahead. I believe there were light shows in different parts of the city during that time, around the Labour Day holidays.

Light display of a warrior in the Ming dynasty (the period of time when Nanjing was the capital city) on the ancient city wall.

Strolling along the Qinhuai River, which runs parallel to the ancient city wall. The Qinhuai River flows through Nanjing and finally feeds into the Yangtze River. 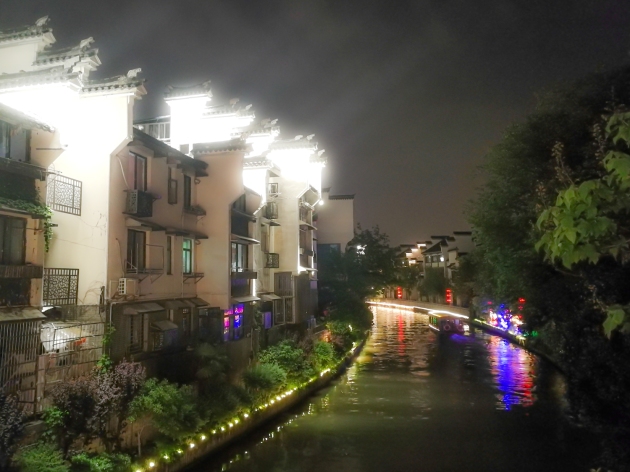 Continuing on with my even exploration of Nanjing, stopping by here and there along the river to admire the night scene.

More lanterns and light shows around the city wall…

The beauty of the Porcelain Tower (also known as Bao En Tower) is revealed more clearly with a closer look. The colours were just so gorgoues! The original tower or pagoda was constructed in the Ming dynasty but was subsequently destroyed, and what we see here is a replica of the original structure.

Huge flower lanterns guarding the entrance to another lantern festival somewhere around the Fuzimiao area. 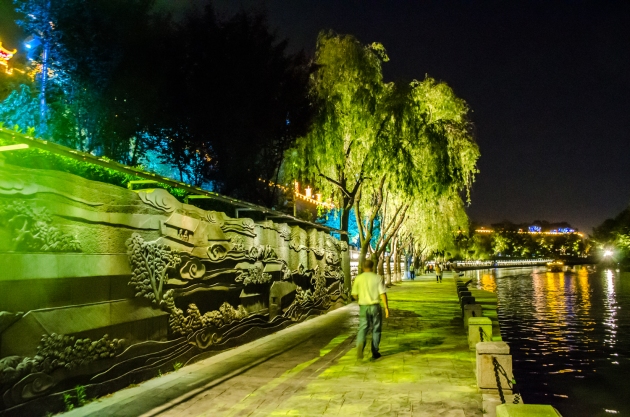 And somehow I ended back at the Qinhuai River again, and actually I won’t hesitate to admit that I really enjoyed walking and just chilling along the river, even though it was by myself. Surprisingly there weren’t that many people, possibly because the Labour Day holidays have just passed and all the tourists have already gone back home…good timing for me 😛

Well then, I hope you enjoyed reading my short posts and liked the photos from my trip to Nanjing two years ago. Time to decide what city I should write about next…hmm.

In 2019, I visited Yancheng in the province of Jiangsu for my cousin’s wedding. As a side trip after the wedding, I dropped by Nanjing (or Nanking), the capital of Jiangsu, for a brief visit. Nanjing is one of the ancient capitals of China, along with Beijing, Luoyang in Henan province, and Xi’an (or Chang’an) in Shaanxi province. In recent years, Nanjing has developed rapidly into a modern metropolis of great socioeconomic importance. It is home to tourist attractions such as Fuzimiao (Confucious Temple) commercial area along the Qinhuai River, the historical city wall, the Presidential Palace, and the Nanjing Museum. I visited some of these places, but this post will showcase some of the non-touristy sights and encounters that I found interesting in Nanjing. 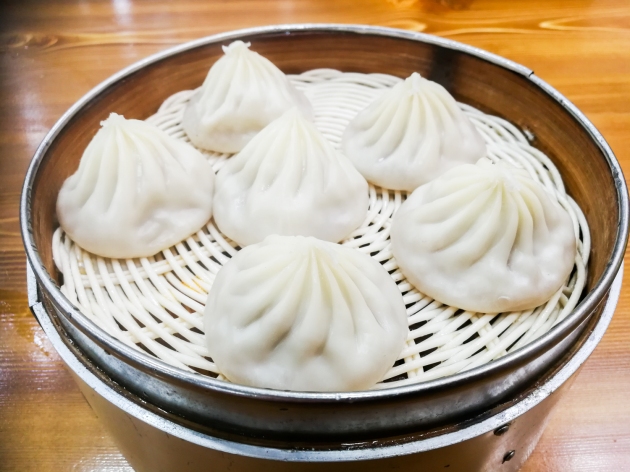 Tangbao, or soup buns, are the most well-known street food in Nanjing and are a larger version of the perhaps more famous xiaolongbao. Dip one into some vinegar, take a small bite, and let the hot soup with all the delicious essence flow into your mouth…yummmmmmmmmmmm. I must have had this at least three times during my short stay in Nanjing, and if “You are what you eat” is true, then I have turned into a tangbao myself… 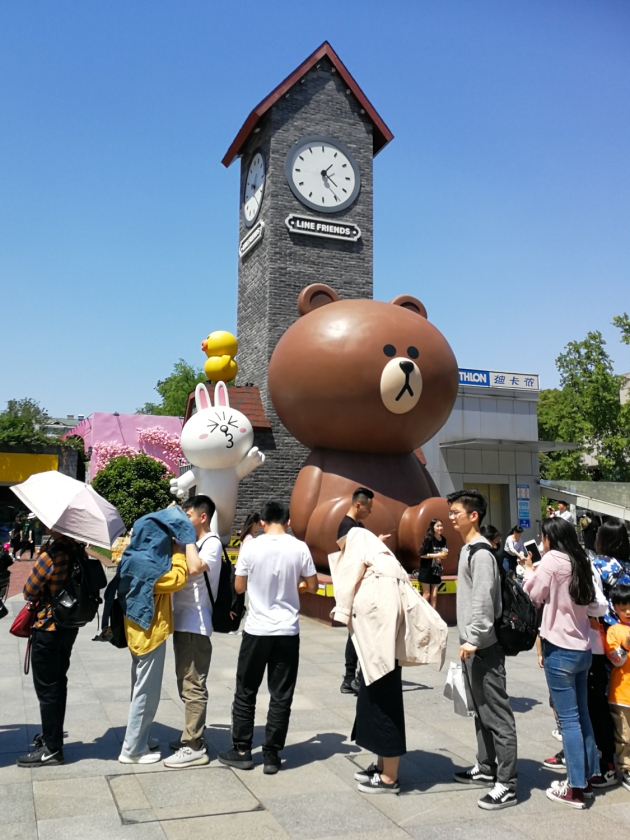 People were lining up for something here but I never found out what it was. I was more interested in the gigantic LINE FRIENDS characters next to the queue. Never used LINE myself but you could never get enough of Brown and Cony 😛 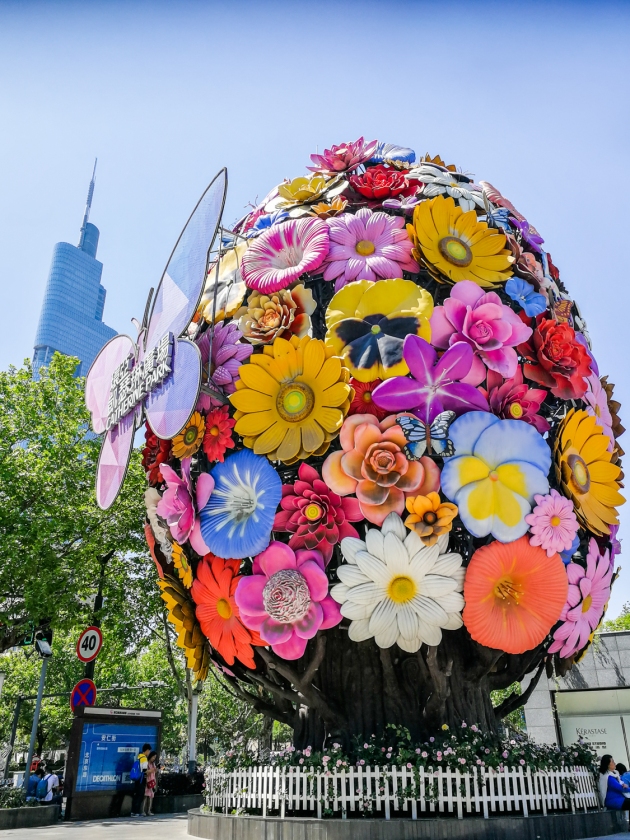 Huge egg covered with a variety of flowers…or well, it looked like a humongous Easter egg, though it was just a tree shaped like one.

Giant plant sculptures of peacocks at Gulou Square. The aerial view is much more impressive.

Nothing much to see here, except this ingenious…hat? Convenient for shading from the sun without having to actually hold an umbrella, and the rainbow pattern certainly attracted my attention rather quickly. Nicely done, lady. 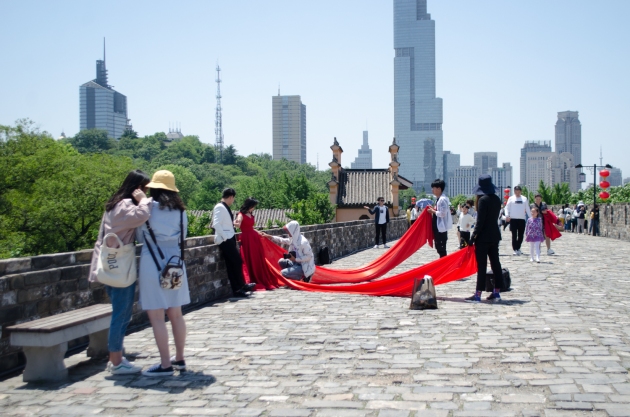 Engagement photo session with an extravagant dress on the old city wall of Nanjing. Frankly I don’t understand the hype behind these lavish photo sessions that, to be honest, look overexaggerated and fake, but it ain’t a typical wedding in China if you don’t take these photos. Maybe I’m the strange one. 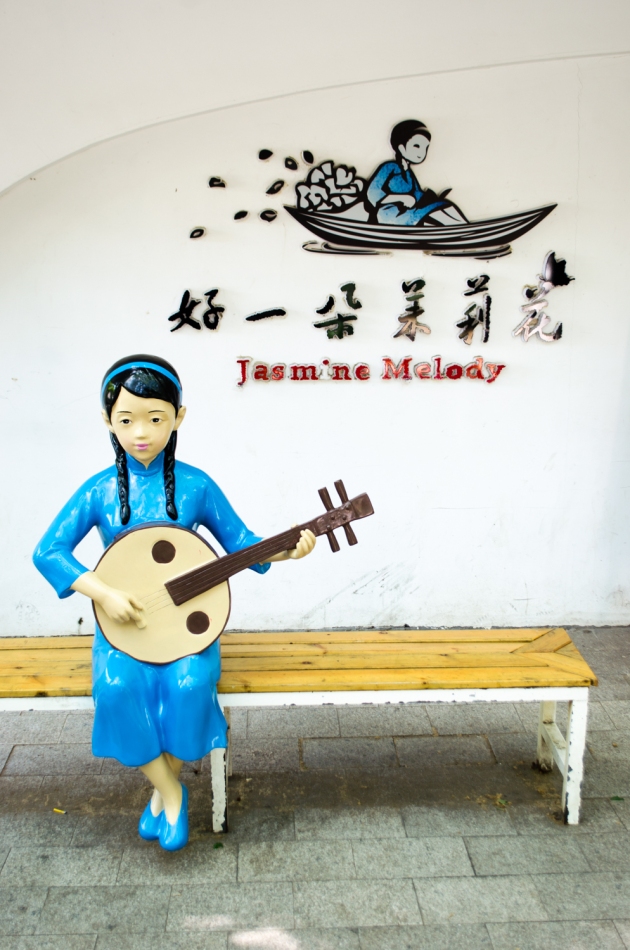 Statue of a girl playing the banjo (I think), presumably the Jasmine Melody, which is a classic Chinese tune.

So that was my non-touristy summary of the brief stay in Nanjing. Again, I did drop by some of the popular tourist spots, but those are simply Googleable so I didn’t want to spend too much time showing photos of them. I think I only spent two days in Nanjing, by far too short to get anything more than an overview of what the city has to offer. Honestly I’d go back for the tangbao alone – it was that good!!