The art and science of cooking, part 5

I haven’t had time to organize my photos from my trip to Italy with my dad, so here’s something while that’s on hold – the 5th part of the “The art and science of cooking” series. After all, everyone likes some good food during the holiday season, no? 😉

As usual, if you want to check out the previous editions, go ahead and read PART 1, PART 2, PART 3, and PART 4. 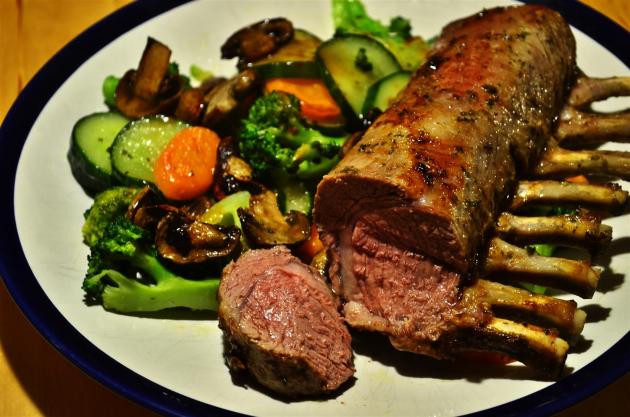 Ever since I saw my friend Stephane’s post about the most perfect rack of lamb he made, I’d been itching to try it on my own. Then Florence showed me a mouthwatering photo of a rack of lamb that she made. That was it. I was going to make it. With a huge kitchen and a lovely oven at my disposal in Louvain-la-Neuve in October, there was almost no reason NOT to give it a try. And it worked magically. Stephane’s suggestion was so simple yet so perfect – 40 minutes at 400 degrees F, no prior marinating required. I had doubts when I was cooking but when I bit into the juicy, tender meat, I felt like my life has been completed. Thanks Stephane and Florence for the inspiration! 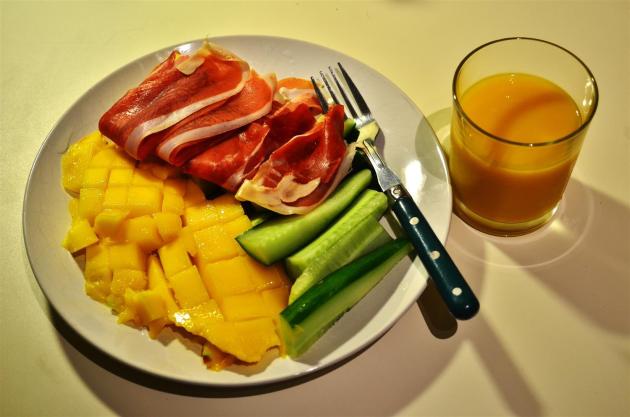 In Louvain-la-Neuve, I discovered a great combination – mango and prosciutto ham. The sweet fruit is the perfect complement for the salty meat, and some cucumbers can’t hurt. Plus a glass of fruit juice – I didn’t even have to cook 😛

With the kitchen in Louvain-la-Neuve, I experimented with a lot of things I’ve wanted to try. One of them is fried rice. It’s not that I never tried to make fried rice before, but it never really worked out well, until this time. This one had mixed veggies (carrots, peas, cabbage, and green beans), shrimp, and ham, and tasted just like the one that my mom would always make. More than the taste of the fried rice itself, I think what I enjoyed more was the taste of home 😉 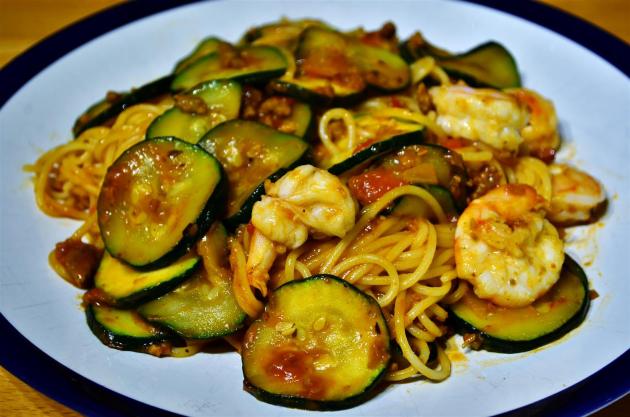 Yet another random, spur-of-the-moment trial – spaghetti with shrimp and zucchini. I don’t think I’ve ever seen zucchini combined with pasta but hey, why the heck not? It’s only in Europe that I began to use zucchini in my cooking, and while I prefer cucumber in some dishes, I like to use zucchini in some others, such as this one.

Squid with mixed peppers and black bean sauce is a Cantonese favourite! I like types of food with squid-like texture, including octopus, cuttlefish, and all other types of seafood in the same category. I often make this at home when I’m tired and just want something quick and Chinese. The “patterning” on the squid is one of the fun parts of preparing for the dish.

Salmon is one of my favourite ingredients to use in cooking. Instead of the usual salmon sashimi and pan-fried salmon, I decided to bake salmon in an oven. After marinating with honey and soy sauce for a bit (clearly not long enough though), I tossed it in the oven and within 15 minutes, it was ready! AND it was yummy 😉

Finally, a dish made the REAL Cantonese way, with nothing but vegetables, oyster sauce, corn starch, and water. Oyster sauce is indispensable in Cantonese cooking and I love to add it to pretty much whatever I’m making. I love the combination of asparagus, shiitake, and carrots, both in terms of taste and aesthetics. The three colours go so well together! With a bit of oyster sauce to bring out the Cantonese taste and a bowl of rice on the side, this is a perfect home-made meal.

4 responses to “The art and science of cooking, part 5”