The art and science of cooking, part 1

Cooking is one of my passions. Well, it started out with baking. Ever since the first time I baked a cake five years ago, I’ve been addicted to the art of baking and subsequently, cooking. Yes, I consider it an art. It is also a science, as it is the exact same thing as doing experiments in a lab. You mix things together, whisper a spell, and wait for something to happen. You usually follow a recipe or a protocol, but when those don’t exist, you just throw in whatever you have available and hope for the best. Isn’t that how it works for both cooking and lab work?

As I only developed this passion late into university, I started to expand my kitchenware collection in fourth year, a bit too late as I only had one year left to take advantage of my relatively well-equipped kitchens in Waterloo and in Toronto. By the end of the school year I had accumulated a set of baking utensils that would in no way be able to accompany me to France. Oh boo.

After coming to France, I didn’t bake as much, mainly due to the lack of a large oven, but instead I picked up cooking. As long as I had a wok (which was thankfully given to me by a friend), a pot, some basic Chinese sauces, and rice, I was ready to experiment, even with a small kitchen. (Of course, that is not to say that’s all I have, but that’s the bare minimum, anywhere.) Unlike baking, I rarely follow a recipe when I cook; instead of precise measurements and proportions, I go with past experiences – sometimes I rely on instinct – and whatever inspires me at the moment, which makes things a lot more interesting…and fun!

Many friends ask me, “Annie, what do you eat in France?” I think some people expect me to say things like cheese and baguette and things with fancy French names, like foie gras and escargots, but sorry to disappoint you. Although I do occasionally eat out and enjoy authentic French cuisine, my daily life revolves mostly around Chinese cooking. I’ve lived all my life with the Chinese way of dining and although I would probably survive without it, it wouldn’t make me very happy 😦

In this post I share with you some of the culinary experiments undertaken within the past year and a half. Unless otherwise stated, I made the dish myself. Of course, not everything is cooked the Chinese way, but most are. There will be a second entry after this one with more goodies. I don’t want you to get TOO hungry… 😉

Let’s start off with some good ol’ pancakes served with butter and the Canadian favourite, maple syrup! Yes they are typically eaten at breakfast, but who says you can’t eat breakfast food at any other time of the day? 😉 Pancakes are so simple to make as well, just mix the seven magical ingredients at the right proportions – flour, egg, milk, butter, baking powder, sugar, and salt. Then pour some batter on a frying pan, flip until both sides are golden brown, and tada! Fast, easy, and delicious. I actually had some last week but without the maple syrup, and while plain pancakes already taste pretty awesome with butter alone, I just felt that there was something missing without my sweet Canadian goodness. Time to restock.

This dish is what I’d like to call “Peng-styled” broccoli and beef, because the secret to its success was passed on to me by my dad, otherwise known as Peng. From start to finish, he taught me how to slice the beef, how to marinate the beef in order to ensure its tenderness and flavour, how to sauté the broccoli, and how to cook the beef and control its “doneness”. Thankfully there isn’t any exotic ingredient or strange Chinese spices that can’t be obtained in France, so usually, there is no hassle with the preparation. Given that broccoli is my favourite vegetable and beef is my favourite type of meat, this dish is a must-learn for me, yet while I have gotten the hang of what my dad taught me, when I’m at home in Canada, I almost always ask him to make it. No one beats the original master at his own dish, and what we end up with is irresistibly tender Peng-styled beef, succulent, scrumptious, SO GOOD. 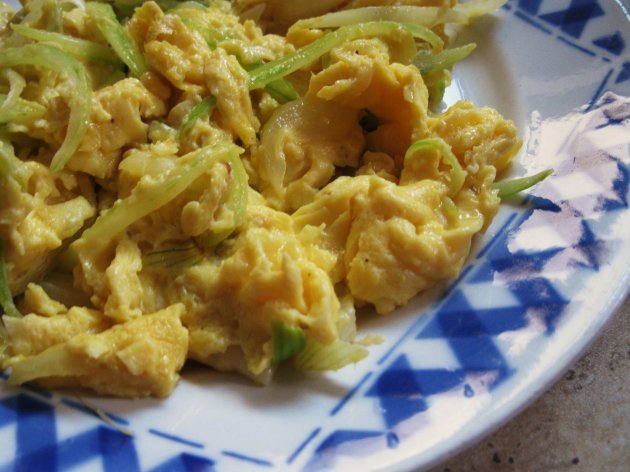 I like to call this one “lazyman’s favourite”, because c’mon, what can get easier than scrambled eggs with onions? I made this after hearing an ongoing inside joke at fellowship, that Sen only knows how to make two dishes: scrambled eggs with onions, and onions with scrambled eggs. I can see why a busy student would like this quick and tasty combination. No complicated recipe or marinating procedures, alright, yet sometimes the simplest dishes are the heartiest and most homey.

Ah, and we get to one of the timeless Chinese classics, mapo tofu. Since “po” means “old woman” in Chinese, I wonder where the name of this dish came from. Did some old lady named “Ma” invent the dish? Regardless, this is one of the dishes that my mom frequently made at home and I loooooooooooooved it! In France, I developed my own style and I’m surprised that it turned out quite popular among my friends! One thing I constantly do, though, is overestimate my tolerance for spiciness, and I always end up putting in too many chilli peppers than I can handle (in addition to the hot bean sauce and the Guilin chilli oil). That’s not a problem for most of my friends here, since they seem to live with the motto, “The spicier, the better”. Although I do end up needing to drink a lot of water, I still cannot get enough of this mapo tofu. Serve it with a bowl of rice and Annie is a very happy girl 😀 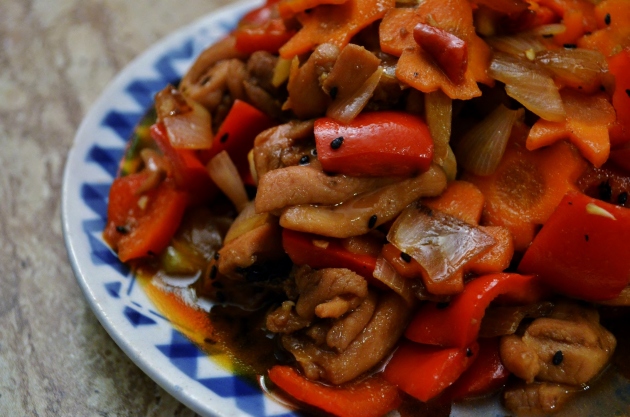 This dish was invented by my dear friend LS-san when he visited me last year, and I recreated it afterwards (the picture shown above is the LS version). Although he didn’t remember the exact proportion of the marinades and sauces he used at the time of cooking, since it was spontaneous, he did give me the general gist of it and I had to figure out the rest. When I asked him to give this dish a name, he didn’t think much and just said, “Zero Five Chicken”, in Chinese. And Zero Five Chicken it became. The essence of the dish is, I realized later, the honey. You definitely gotta add a touch of honey when marinating the chicken and make sure the meat absorbs the sweetness. Mmmm!

Finally, I present you stir-fried curry beef slices with onions. I was inspired to make this after adding curry powder to my collection of spices, and it turned out quite well. I always like my beef slightly rare, even if it’s not steak, hence the tint of red on the beef in the above picture.

Well, that’s all for now, folks. This brings us to the end of part 1, and you can count on part 2 to be published in a few days. Annie loves food, but then again, who doesn’t? Do you cook at home? Do you like Chinese food? What are your favourite types of cuisine and dishes? Leave a comment below and let me know! Cheers 😉

10 responses to “The art and science of cooking, part 1”