The “in-yo-face” kind of Hallstatt

I had never heard of Hallstatt, a town in (sort of) central Austria, until my friend, knowing that I was going to Vienna, told me, “You HAVE to go to Hallstatt”. And that was all it took to convince me, if that was any convincing at all. Yes, it would take me 3.5 hours to get there from Vienna (and of course 3.5 hours for the return trip), but I had the time. Plus, 3.5 hours in a train sounded SUPERB especially if I was promised window-side scenes like the ones I saw around Interlaken. For this, even a 7:30am departure could fill me with anticipation. 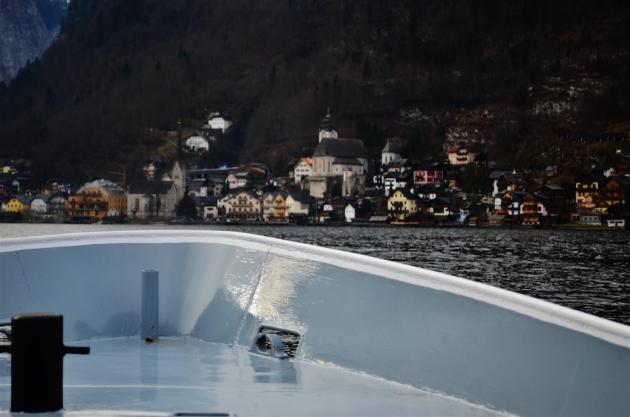 The only way to get to Hallstatt without a car is by ferry, which takes you from the Hallstatt train station across the lake to the village itself. On this day, there were approximately 10 passengers aboard the small ferry that brought us across Lake Hallstatt in 10 minutes. I guess not many visitors come during the winter, even a mild one. The reason why the title of this post says “in-yo-face” is obvious – Hallstatt looks like a place that emerged right out of the mountains. It was as if someone thought that mountains and lakes were too monotonous and just decided to carve a town in the midst of it all. The mountains were so close, so…”in-yo-face” and that was the best expression I could think of to describe them. Really though, you wouldn’t expect the massive mountains to be hiding such a pretty gem. Well-played, Hallstatt.

First impression: Where are all the people? I think during the 4 hours I spent wandering in Hallstatt, I kept seeing the same 10 people on the boat over and over again and it made me wonder if anyone actually lived in this town, secluded from the outside world. I presume that the town would be filled with much more life and activity during the summer months, when tourism blooms, but I much preferred the deserted Hallstatt – although I hadn’t experienced the busy one – for its serenity, peace, and untouched beauty.

The exploration of Hallstatt turned into a hike, a very unexpected one. As the salt caves were closed, all I thought of doing was just walking around. I knew there were hiking trails around Hallstatt, but I didn’t plan to follow any of them. Eventually I realized…these “trails” were everywhere! And the leisurely walk became a hike, a very rigorous one, too! Paths leading to who-knows-where were scattered all over the town, with many steps bring you up and down. It was truly like an RPG, where you got to choose your way – to go straight, or turn right and take the stairs down? I loved it!!! Even though walking around the “town centre” would have taken no more than half an hour, the hike made me feel more like an adventurer than ever and I was rewarded with some absolutely stunning views.

For example, here is a turn that I took randomly. All this time I had no idea where I was going, but I knew that I wouldn’t get lost as long as I didn’t venture off TOO far. After all I did have a time limit and it would not be nice to get stuck in a maze, missing the ferry to the train station and the train back to Vienna. The intricate thing about these hiking “trails” is that sometimes they led into residential areas…although you could argue that the entire town is “residential”. What I mean is, sometimes I would enter an area and I would swear it was someone’s private backyard. I would think that the owner would come out and ask me to leave, but that never happened and I just kept going…to the next stretch of the trail. Not a conventional hike at all, but certainly a lot of fun. It kept me going on and on, through narrow alleys, up and down steep steps, trying to find more…

At one point I was high enough to see Hallstatt almost floating on the lake, drifting between the mountains. Wow! I think I might have ventured into another village, I wasn’t sure. And actually, I got so high up that I felt like I was walking out of the town and INTO the mountains onto the real designated hiking trails. Hmm…not lost yet, I hope. I think I could still find the way back to the dock on time…?

When you see a train snake through the mountains and realize how small it is compared with the majesty of nature, it is rather awe-inspiring. Once again, those “in-yo-face” mountains dominate my entire field of view and the train, carrying me hundreds of miles from Vienna to Hallstatt, all of a sudden seems so insignificant. And so, I am just a speck of dust in God’s great universe, but so blessed.

At one point I heard water. Falling water. Waterfall. It was coming from somewhere nearby, I wasn’t sure where, but I was determined to find it. I followed my ear, went up more hills and stairs, turned many corners without finding anything like a waterfall. But I knew it was there, very close by. So I kept walking, listening, searching… 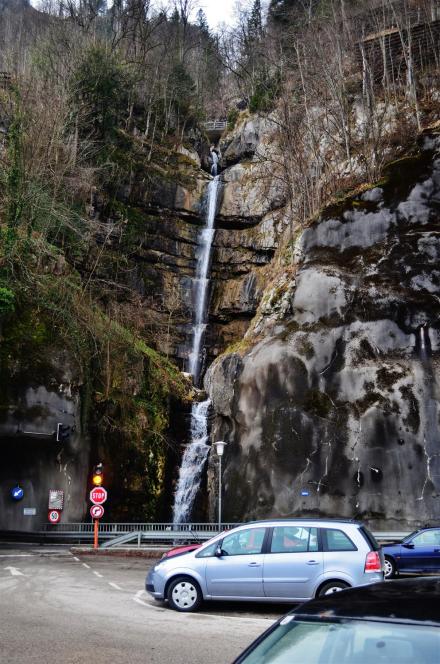 …and my ears didn’t deceive me. After a bit of exploring, the waterfall appeared in a rather inconspicuous place, behind a parking lot of some sort. I felt like the Little Prince, walking with the pilot in the desert to find the singing well, and how satisfying it was once they reached it! I approached the waterfall, all the while enjoying its melody in my ears, the only sound in Hallstatt aside from a car or two passing by once in a while. This was probably the most pleasant part of the trip, a treasure hunt, almost, and the mission was accomplished.

Looking up, I realized that it was possible to head even higher to a point that would take me closer to the actual waterfall itself. So I kept going and almost worked up a sweat, but I was rewarded with a closer look of the waterfall. If I had more time, I would have gone even higher to try to find the source of the waterfall, but I had to go… 😦

By then I was really high up and effectively “lost” inside the mountains, unsure whether I was still in Hallstatt. I needed to find a way back down to the town and so I followed the only trail that was in sight, deserted without anyone else around me. There was a moment where the epiphany struck me that if I tripped and fell off the edge, there would be no one there to save me and if I died, it would probably take a while before anyone even realized it. That was how isolated I felt that I was from the rest of the world, and strangely…I enjoyed that kind of atmosphere, temporarily.

A sign saying “Hallstatt” was certainly a reassurance for me as I continued my way back into town. I felt like just as the village seemed to be carved out of the mountains, these trails and steps were walked into existence. It is like what Mr. Lu Xun said, “Hope cannot be said to exist, nor can it be said not to exist. It is just like roads across the earth. For actually the earth had no roads to begin with, but when many pass one way, a road is made.”

Almost there…see, doesn’t it seems like I was actually descending into someone’s backyard? By then I’ve walked enough of these trails to know that they would eventually lead me to another open path. I am not an intruder, I promise! 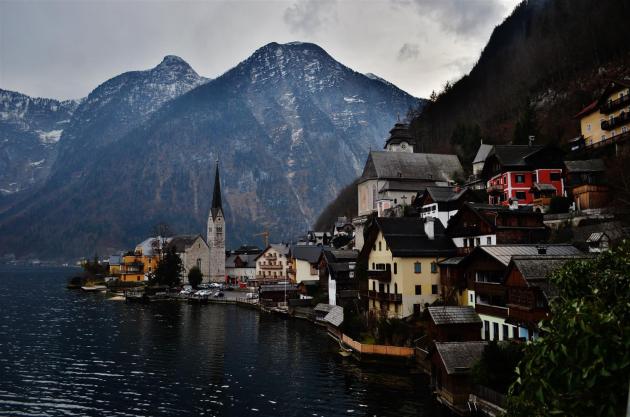 In the end, I took a photo of Hallstatt from a very appropriate angle, showing again those “in-yo-face” mountains complementing the quiet village on the lake. There was no snow in Hallstatt this January, yet no sign of the sun was seen that day. Hallstatt remained asleep in the valleys, unshaken by the world and still peaceful in its oblivious winter slumber before the warmth of spring and winter calls out to its visitors with the air of invitation. And so I left, not disturbing its tranquility, allowing to continue dreaming in its own harmony.

It is actually hard for me to believe now that a place like Hallstatt is a reality on Earth. My mind has been reconditioned into the ordinary cityscape with noise, traffic, and stress as everything that defines a “normal” lifestyle. Or perhaps Hallstatt itself was a scene in my dream, and I was the one who had fallen asleep to find it. Did such a place really exist? If I ever go there again, don’t wake me up, please.

7 responses to “The “in-yo-face” kind of Hallstatt”