This series on the Basque Country is not in chronological order. I wanted to write the San Sebastián post before La Rhune and Biarritz, while it is still relatively fresh in my mind, since it was such an interesting trip.

So, San Sebastián. It is a city on the Spanish side of the Basque Country known for its lovely beaches. I am truly willing to say that I liked it more than Barcelona, the only other big city in Spain that I have visited so far. Before going to San Sebastián, I got the impression that it was a small, touristy city that would require no more than one day to experience. In fact, I was going to stay only one night and head back to Bordeaux the next day before Mariel suggested staying two nights. I’m glad I took her advice, as San Sebastián had much more to offer than I had anticipated!

From Biarritz, Mariel and I hopped onto the PESA bus that took us directly to San Sebastián. The ride itself wasn’t particularly pleasant – it was the first time after a very long time that I got carsick (or…bus-sick, if there is such a term?) I believe it must have been due to the rough roads from Biarritz to San Sebastián, though I couldn’t be sure because I was half asleep during most of the trip.

We arrived at night, found our hostel, dropped off our belongings, and headed out to dinner right away. The real exploration started the next morning, when we decided to stroll along the riverside and head up Monte Urgull, a hill right in the midst of the city between the two beaches, Zurriola and La Concha. 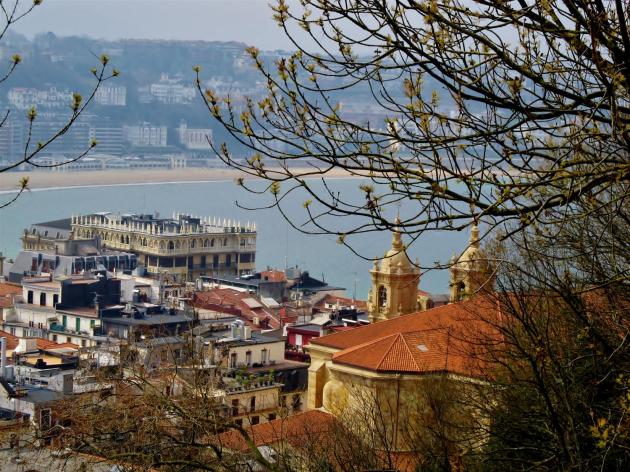 We climbed up Monte Urgull at a very leisurely pace, occasionally stopping to enjoy the view of San Sebastián. From Monte Urgull, the entire crescent of the Bay of La Concha could be viewed, and all of San Sebastián was laid out right in front of your eyes. 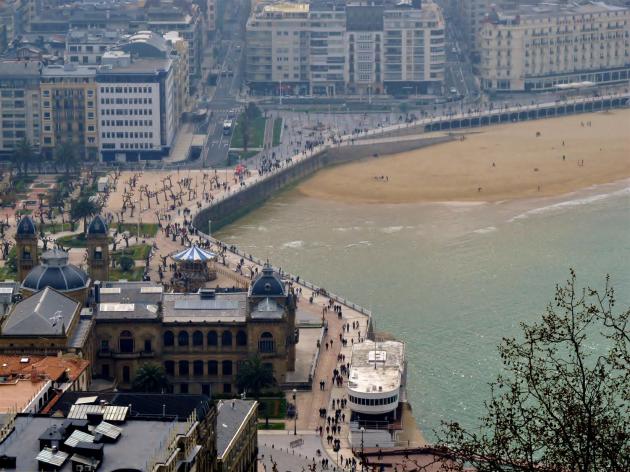 A little high up, we could see La Concha a little more clearly. It was a gray, foggy day, but there were still lots of people along the bay. I could just imagine the summer season when the beach would be completely full of people…what a sight that would be! 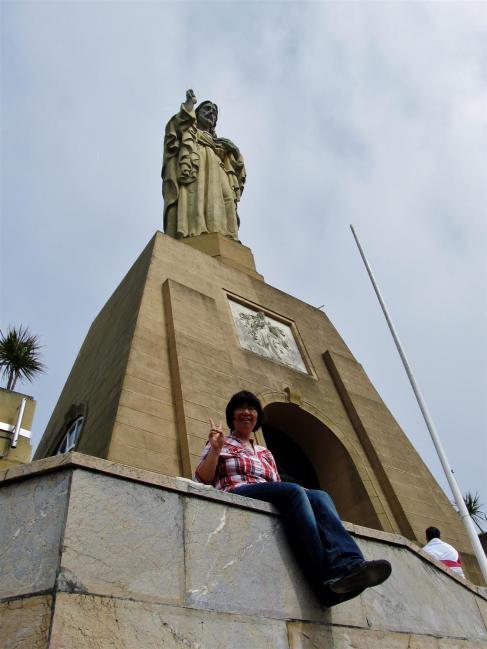 The hike took a good hour or so, with winding paths that eventually led to the same destination, the statue of Jesus. Finally at the end of our hike, we encounter the gigantic statue at the top of Urgull. It seemed like He was looking over San Sebastián, sending “PEACE” all over the city. 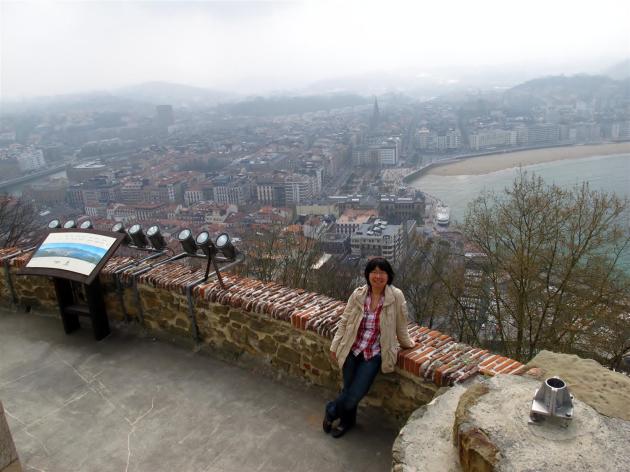 Unfortunately the view of the city wasn’t as clear as it could have been on the day we visited, but it was still stunning nonetheless, with the beach right by the city centre. Thanks to Mariel for taking my photos! 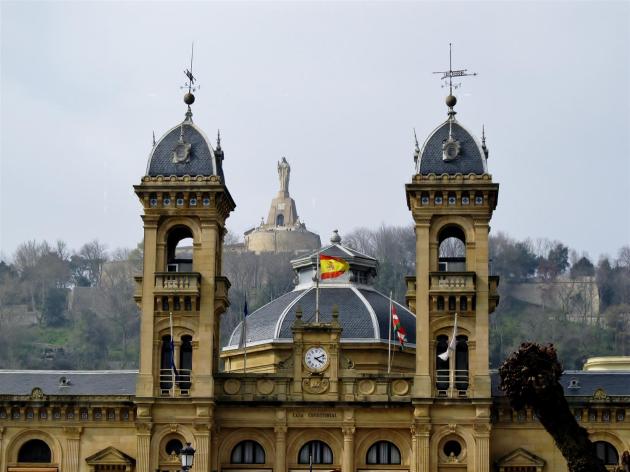 Back in the city, we stopped by the San Sebastián city hall. Oh look! There’s the statue of Jesus where we were at only about two hours ago! It really didn’t seem that far away, but alas, I’ve always had somewhat of a problem with the perception of depth. Something could seem really far away and really close to me at the exact same time. How that is possible baffles me. 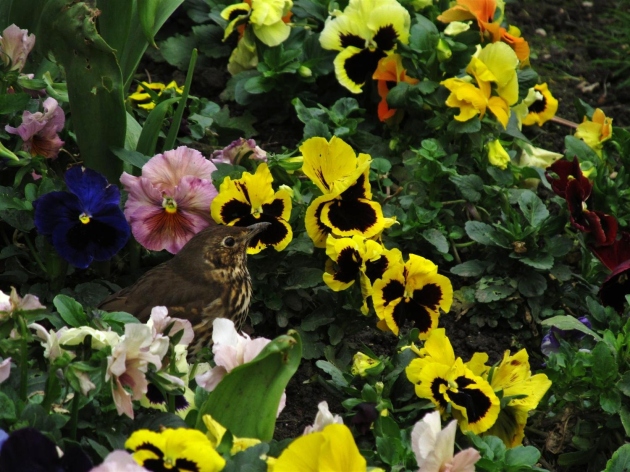 Oh, hello little bird! Mariel and I discovered a garden of flowers and while we decided to snap some photos, I caught a glance of this adorable bird that wanted to blend in with the flowers, unnoticed. I saw you there, little one, I saw you. Consequently it kept trying to escape from me but I went after it non-stop, hovering from one side of the garden to the next, following the bird wherever it flew until it flew too far away for me to catch 😦 I ❤ birds! 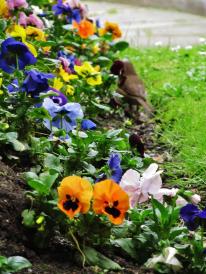 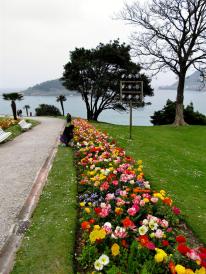 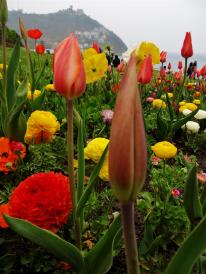 San Sebastián, city of flowers! Mariel says that I only say that because I don’t see these patches of flowers everywhere in Bordeaux, and it is true! It seemed that everywhere we went in San Sebastián, we would see some sort of garden or patch with hundreds of flowers so dazzling that I thought I was back in Keukenhof in Holland. In front of the city hall, Miramar Palace, any random square…anywhere at all! 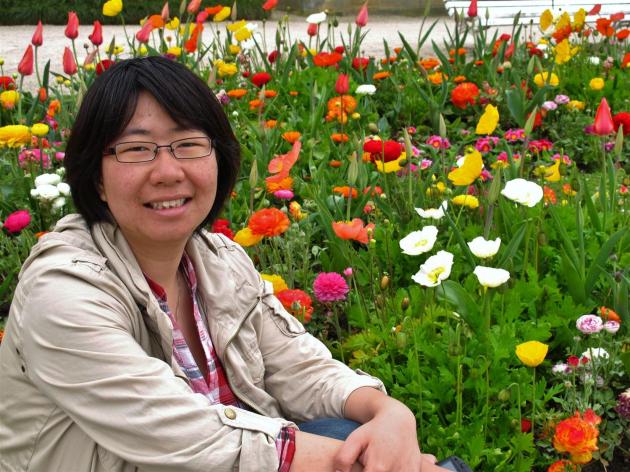 Thanks again to Mariel for taking this awesome picture of me! The awesome part of the picture is the background of flowers…not me, teehee! I do see my white hair emerging again though…ahh!!! 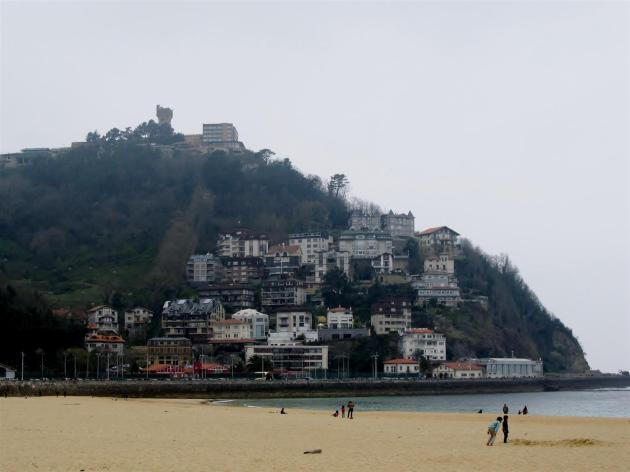 We walked along La Concha and boy, it was a longer walk than I had expected. From the top of Urgull, the bay looked huge, but I seriously underestimated the amount of time it took to get from one side of the beach to the other end. This is the Igueldo quarter, on the western side of San Sebastián. It reminds me a little of Riomaggiore, though only in imagination since I haven’t been to Riomaggiore…yet.

San Sebastián is a hybrid of leisure and liveliness, completely different than what I had in mind at the beginning of being somewhat of a small yet touristy place. 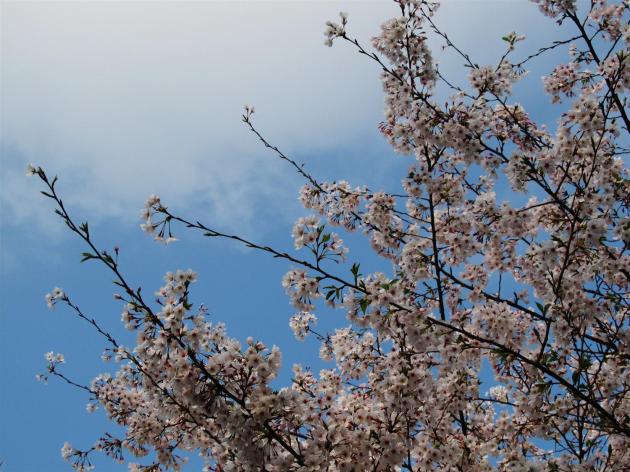 Lovely cherry blossoms right outside the hostel on a Monday morning, with weather that was much more agreeable than the previous day! I still can’t believe I didn’t know about the cherry blossoms in Toronto at High Park, and it’s gonna be probably another two years till I possibly go back to be able to see them there! 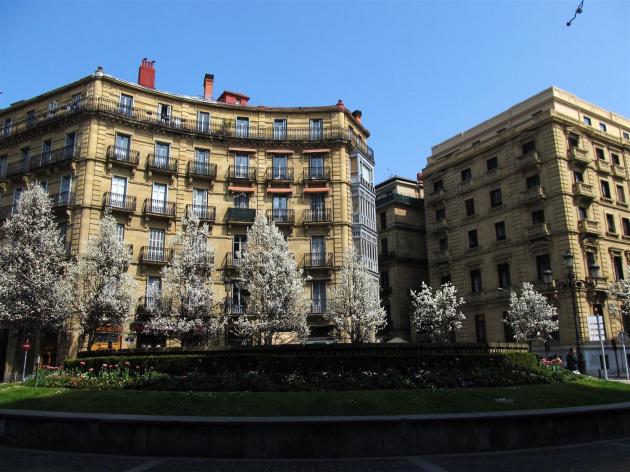 Plaza de Bilbao, in front of the fountain which wasn’t sprouting water at the moment. 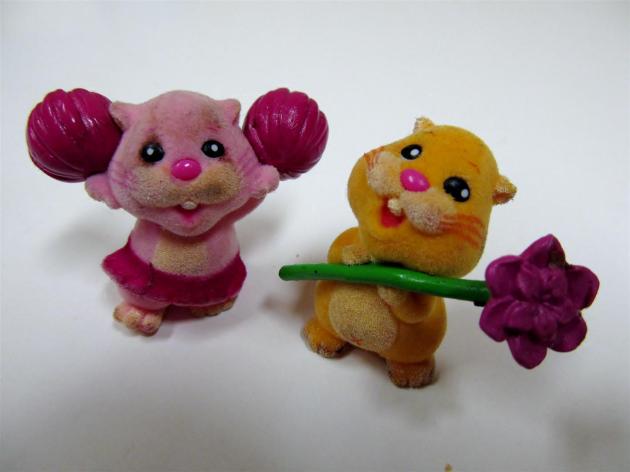 Mariel and I had a simple lunch before we left the hostel and San Sebastián for good, and I saw these two tiny figurines in the kitchen, each about 5 cm high. Judging by the front tooth, chipmunks, I’d think? 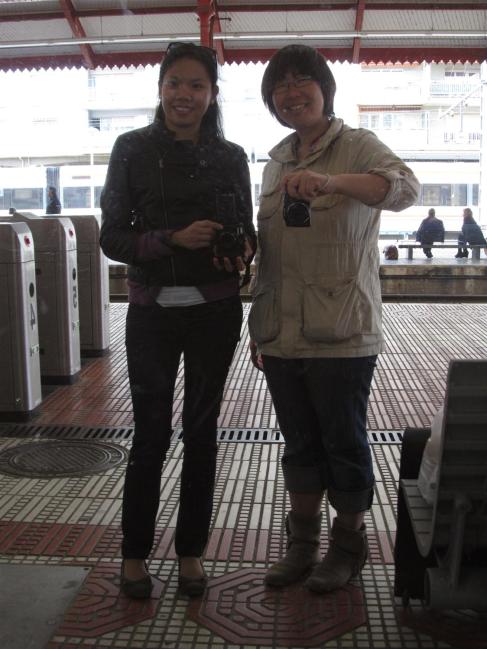 And finally, a photo of Mariel and I together in front of the mirror at San Sebastián station as we waiting for our train to Bordeaux. I always have the impression that taking photos in front of a mirror is “Asian” style…perhaps just a misconception or personal stereotype? Anyhow, the trip was fulfilling and an excellent way to end our week in the Basque Country! Thanks to Mariel for accompanying me on this exciting journey!

Now I’ll attempt to go back in time and write about La Rhune and Biarritz. Stay tuned 😉