IDS-FunMat (International Doctoral School in Functional Materials) training week is perhaps the only time of the year when I look forward to a Monday. It is an annual training week in my PhD program where all the PhD candidates meet at one place to undergo lectures, workshops, and discussions. Of course that means a lot of interaction and socializing, and what better place to do it than right beside the Atlantic Ocean? The destination this year…Anglet!

When I told friends that I was going to Anglet, no one knew where that was. Then I said Biarritz…still doesn’t sound familiar until I popped out the name Bayonne. Turns out the three places are actually one big community, kinda like Bordeaux and Pessac and Mérignac, I suppose.

Last year, the first training school took place in Portugal. Yes, it was also by the Atlantic, but one can never get too much of the ocean. I met my colleagues – or classmates – for the first time last year and had a blast getting to know everyone, coming from all over the world ranging from the Philippines, Mexico, Nepal, Canada (yes there was another Canadian aside from me!) etc. This year, in addition to my class, there was the new class of 2011 that has joined the program. The nationalities were as diverse as before, if not more diverse – Turkey, Singapore, Ukraine, Italy…you name it! Double the people, double the fun!

The people – I thoroughly enjoyed spending time with everyone in the IDS-FunMat program, and I was so excited to see the people in my class, some of which whom I haven’t seen since Portugal last year! It’s a marvelous thing, bonding with people. Nature nourishes us, but human interaction keeps us alive.

Seems like Mariel from the Philippines (left) and Daniel from Australia (right) are having an intense scientific discussion on the beach! From photovoltaics to biomaterials to solar cells, PhD candidates from all areas of functional materials met during this training week to discuss our progress, problems, and prospects. 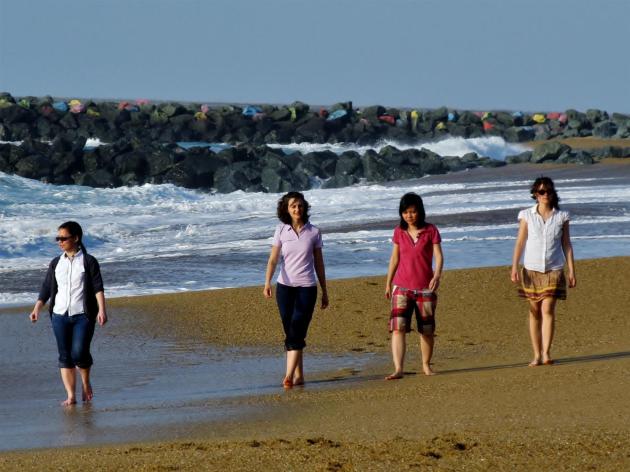 Anglet was blissfully blessed with delightful weather the entire week. Between and after lectures, friends enjoyed strolling on the beach, having a nice chat, and just getting to know each other. From left to right, we have Nhi from Vietnam, Maryna from Ukraine, An from Vietnam, and Mathilde from France. The water was cold, but pleasantly so! 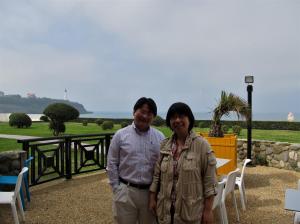 Of course, Annie likes to hang out with friends in the midst of intense training. Here we have Alex from Brazil (top left), who works partially in the same lab as me, Raghu from India (top right), colleague working in Caen and Liège, Frank Gu from Canada (bottom left), my biosystems professor in 4th year undergrad, and Uyxing from France (bottom right), adorable girl working in Bordeaux. I was particularly pleased to know that Prof. Gu joined the IDS-FunMat program and even more delighted to see him in Anglet. It’s been two years, wow!

Bonding time with the ladies – from left to right, Annie, Henu from Nepal, Diana from Mexico, and Uyxing again.

I was consciously trying to replicate an effect in a photo from last year’s training school where several people placed themselves on piles of rocks in a random conformation (yikes that sounds like science!) I almost fell off the rocks taking the picture from last year, but I was safe this time!

Nature – It’s not just a prestigious journal where every scientist wants to publish. Nature is life. It is the essence of every breath ever taken, the embodiment of every mystery ever entangled in the universe, and the beginning and the end of every question ever asked in humankind. 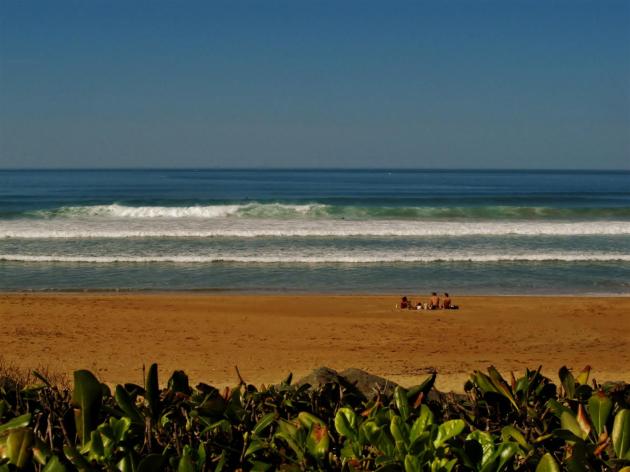 The Atlantic Ocean – vast, immense, unimaginably enchanting. How many hearts has the sea swallowed? Sometimes it feels like I can just take a boat and paddle into the nothingness, to nowhere. Then to think that Canada is on the other side of the blue…can you reach the end? How long do you have to aim for the horizon to touch the sky?

The Biarritz-Anglet-Bayonne region is famous for its surfing sites and it is not difficult to see why. On the first day of the training school, we observed a great number of surfers taking advantage of the roaring waves on the beach. It really looked like a lot of fun and makes me want to learn it when the water is slightly warmer 😉

Climbing up some hills behind the beach and walking along a path above led us to an area with a stunning view of Biarritz, just on the other side of the cliff. Some of us would make a short stop in Biarritz on Saturday, after the training school, and you can be assured that the Biarritz post is coming up 😀 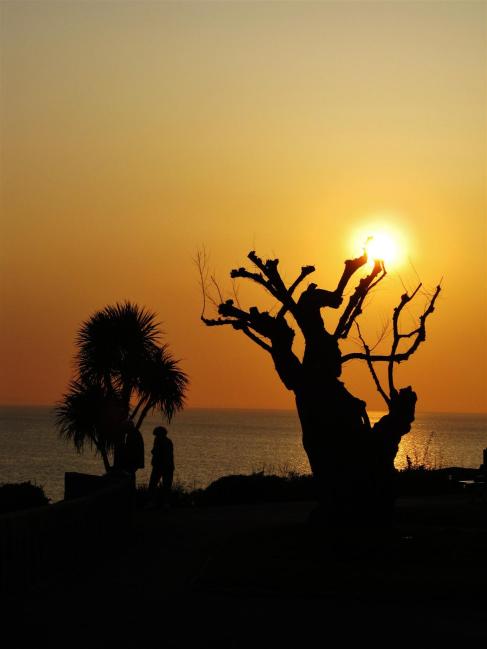 I’ve developed a liking for photographing sunsets lately and it’s become almost an obsession. I think this started when I found the perfect spots to view a sunset in Louvain-la-Neuve, one of which is convenient the lab where I work. Sunsets are so striking. After a long day’s work providing light and warmth to us, even the giant needs to rest, and it makes such an elegant exit… 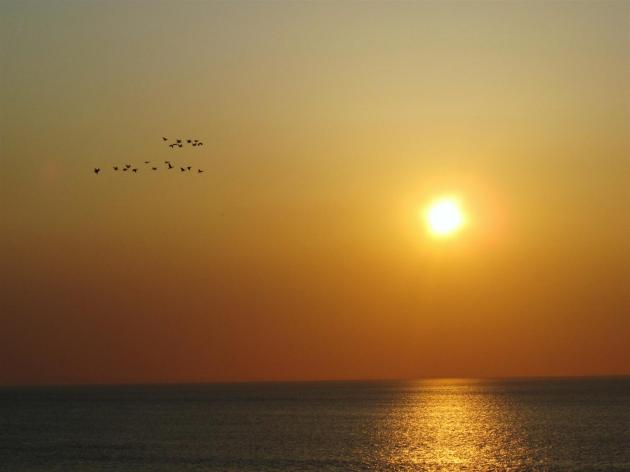 As if they are able to catch up, a flock of birds chase the sun with futile efforts. So gracefully they glide, waving goodbye to the globe before it disappears. 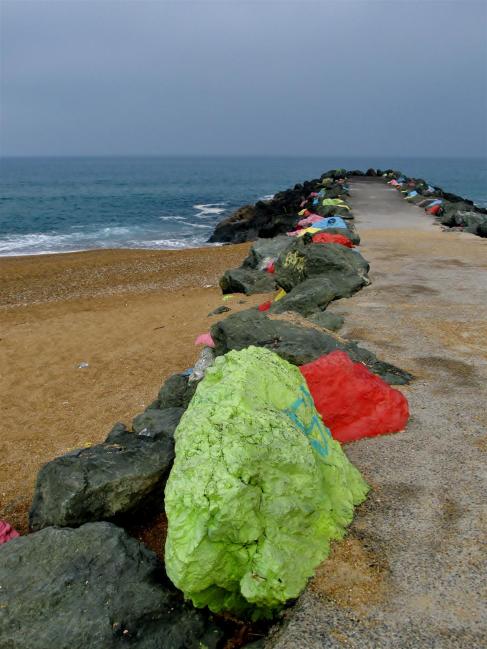 There is a row of colourful rocks by the beach and I haven’t found out the significance of the colours, if there is one. Rather cute, though. 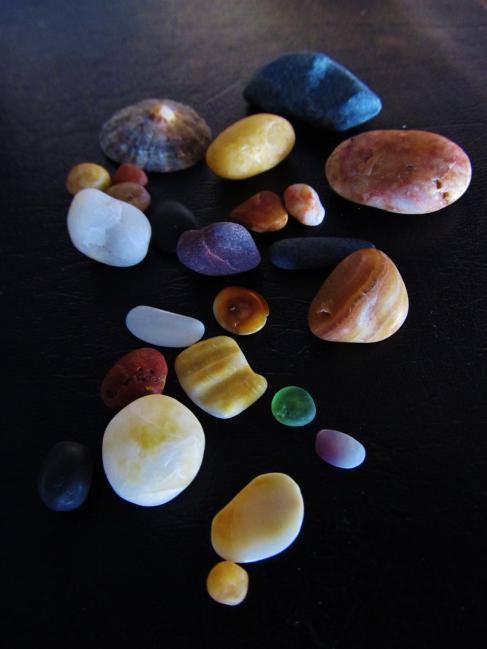 What I liked about this beach in Anglet are the lovely rocks that I found scattered around. The beach in Anglet is much rockier, unlike the one in Portugal with fine, silky sand that hides delicate shells. Very few pretty shells were found in Anglet, and instead these rocks were everywhere. Uyxing told me that the green ones are just shattered pieces of beer bottles that have been continuously polished by the seawater but YOU KNOW WHAT, I’m gonna pretend it’s emerald or something, hah!

So finally… What have I learned?

I doodled a bit on paper during some lectures and out came some epiphanies. Frankly, I don’t know if the scientific field is right for me anymore. It is a cruel thing to realize at this point but I can’t deny that I have doubts. I like research but I love creative writing and the workshop on scientific writing stabbed me like a hundred microtomes simultaneously piercing through my body. No regrets, of course, no such thing exists. It just means I have to re-evaluate my life, my plans, my future.

And optimism is key! A Chinese proverb says, “God does not put you at a dead end.” What seems like a dead end is only the beginning for God. Love life, live life, go go Annie!