It’s been more than 6 months since the initial “Street art in Glasgow” post, and last weekend, I finally got some free time to track down some more murals and street art in this city, following the official “mural trail”. They really are everywhere, and so impressive too! I didn’t manage to find everything that was on the trail, but I did stumble upon a few surprises that weren’t part of the official trail. Let’s take a look.

Let’s start with my favourite one of them all, which I think was completed very recently. This gigantic mural is the work of artist Sam Bates, otherwise known as “Smug”, whose hands were the creators of several other works, including the girl with the magnifying glass in the previous post. I wasn’t aware of the existence of this mural as I was walking in the opposite direction on High Street. I saw someone take a photo of something behind me, and as I turned around, I was awed. Such beautiful piece of artwork with so much detail and colour, but the Man and the Bird (which is what I decided to call it as I don’t know if it has an official name) also elicited emotional resonance in addition to the visual pleasure. Oh, and this isn’t currently on the mural trail, so it was definitely the best surprising find of the day! 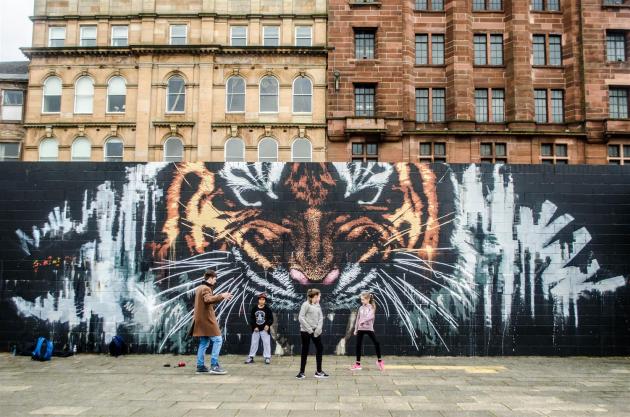 This is Glasgow’s Tiger, an installation that can be found along the quay of the Clyde River in downtown Glasgow. Previously, it had been a fiery tiger drawn in a different style (which I haven’t seen), but it had been replaced with the image of a realistic beast watching the river. While the tiger looked solemn and majestic, some people seemed to enjoyed using it as a backdrop as they danced to some music in its presence! 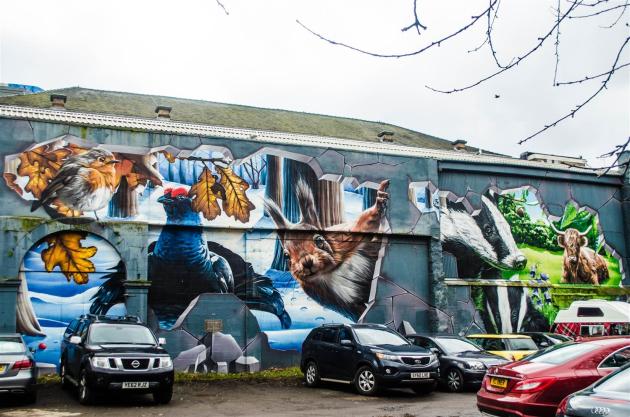 In an unassuming parking lot on Ingram Street in the heart of Merchant City, another piece of artwork by Smug revealed itself, named Fellow Glasgow Residents. Apparently this mural is supposed to represent the different types of animals found in Glasgow’s green space, appearing through what looks like holes in the wall. The three images form one long stretch from left to right and is so impressive that it makes one wonder if this is really a parking lot or a magnificent outdoor gallery… 😛

This lively mural on Argyle Street seems to show an unconventional type of bar – one entirely managed by animals! We’ve got an elephant, a shark, a walrus, a bear, a rhinoceros as the bartender, and a zebra and a moose having a relaxing drink. What a place! I wonder if the Scottish would like to frequent such a place – perhaps the zoo staff went on strike and the animals escaped? 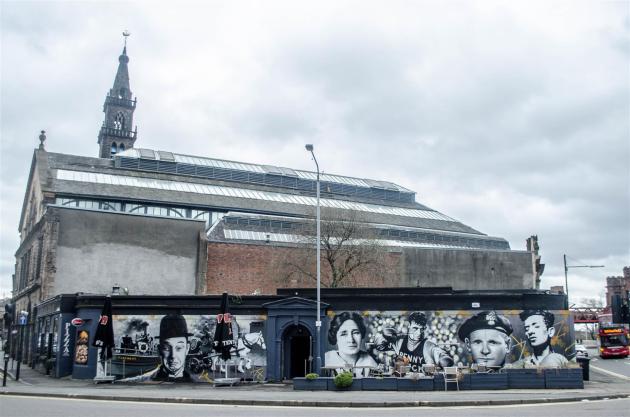 Clutha, a piece installed at the Clutha Bar, is a work by Rogue-One, another artist who has contributed many pieces of stunning work to the city, with the Flying Taxi and the Cat with the Caged Birds featured previously.

I often pass by the Hip Hop Marionettes, another piece by Rogue-One, when I cross John Street. Taken from the description in the official mural trail brochure: “We thought that an interesting concept would be to have body-poppers or break-dancers in puppet form. I took my influence from a Beastie Boys cover and a Run DMC picture.”

The walls of some of the buildings in the University of Strathclyde also have some very colourful paintings that make you wonder if they are the entrances to art studios instead of offices and classrooms. The painting of a girl about to open a door located at the corner of Grahma Hills Building had me confused for several weeks, as THE DOOR was so realistic that I thought it was A REAL DOOR. I thought it was smart to paint a girl opening a real door, but when one day I finally realised that the door was a painting…it was a moment of utmost epiphany. Is this what art does to you?!

Continuing on with the Strathclyde series, just above the girl opening the door is this long, giant mural of what seems to depict classroom life at Strathclyde. It kind of reminds me of the days in undergrad, with rows and rows of desks and benches and many sleepy students that didn’t sleep till 3am the previous night…though the ones on the wall seemed (mostly) wide awake!

Further along George Street, we have a technology-themed and an ocean-themed mural here amidst some of the science buildings of Strathclyde. Seems like Strathclyde (and the city centre as a whole) has a lot of these full-length building murals, and I am genuinely impressed…once again!

As I have mentioned at the very beginning, I haven’t completed the mural trail and some of the murals on the trail actually eluded me even though I supposedly passed by the spots where they were supposed to be. So, knowing me, I will set out again to find those that are still scattered around the city, and a part 3 will be posted!

As I’ve gotten to know Glasgow better over the past 10 months, I’ve noticed the rather abundant street art scene in the city. When I was in Louvain-la-Neuve, even such a small university community hid so many treasures within its walls, and Glasgow had the same, if not more, to offer. Of course, Glasgow is a much bigger city compared with LLN, if you could even call LLN a city or town at all. As with the LLN wall art collection, I’ve gone around taking photos of wall art from the streets of Glasgow. This will be part 1 because there are still so many that I haven’t had the chance to cover, so expect a part 2 to come eventually 🙂

Let’s start with somewhere close to home. This mural was found outside a tattoo shop right beside the Partick train station. Actually I’m not sure if it was painted on a wall or the door/gate of the shop – mental note to self to check when I pass by the place again.

END_OF_DOCUMENT_TOKEN_TO_BE_REPLACED

One of the things that I love about Louvain-la-Neuve (LLN) – two years ago, thinking that I could ever love Louvain-la-Neuve would be a joke – is the vast amount of interesting wall art that’s scattered around the city. I don’t know if it’s just a LLN thing or a Belgium thing. Maybe it derived from the Belgians’ love of comic books, as I know in Brussels they have huge murals of popular comic strips. In any case, the wall art in LLN definitely adds a certain dimensionality to the city, however small it may be. I just love finding new pieces of art emerging from random corners of a new street or the sight of artists in the process of painting a new wall. It’s really a different and curious type of culture.

Like the previous host city-themed posts (Sculptures of Bordeaux, Streets of Bordeaux, Streets of Louvain-la-Neuve, It’s all about Saint-André, among others), I’ve been collecting images (in my mind) for the “wall art” post. Then one day in November, I had a rare free afternoon to do whatever I wanted. So I took my camera for a stroll around LLN, photographing some of the wall art that I know of around the city. By no means is this a comprehensive collection, but they are the ones I see the most often. Take a look!

This mural of a girl in a field of wild flowers is located right beside the Place des Sciences, close by my lab. It’s a relatively new painting – I think I saw it being painted sometime at the beginning of October this year.