Wait, what do you mean I’m doing a PhD…Part 3

It’s been a year since I wrote part 2 of the PhD series, which means…I am graduating soon? Soon means I am defending my thesis in December, which is just another 6 months away. Uh oh. WHAT. IS. GOING. ON.

As I enter the critical thesis-writing stage of my PhD, I often get asked, “How’s your thesis coming along?” Well, fellow non-academia friends, let’s go through some grad school etiquette, shall we?

Thank you, Jorge Cham, for putting it in an understandable, acceptable manner. In short, do not ever ask a PhD student the two taboo questions (or questions remotely similar to them). These questions may induce unnecessary stress, irreversible brain damage (either to the PhD student, or to you, when the student goes berserk and attacks you), loss of appetite, or (in extremely rare cases) increased motivation.

END_OF_DOCUMENT_TOKEN_TO_BE_REPLACED

Two years and a bit – so what?

I was contemplating whether I should write the 2-year reflection post first or the Toronto vacation post, and decided to go with the former. There was so much circling in my mind as I was preparing to write this, all these mixed thoughts and feelings flying in from every direction. Yet…it’s harder and taking longer to write than I had expected. How do you organize two years worth of experience into one post?

Two years of being away from any family. Two years of wanderlust. Two years of getting lost over and over again and waking up in epiphanies in the midst of my academic journey that’s supposedly going to lead me somewhere. Two years of calling a land once foreign to me, “home”.

Well, let’s take a look at some quick figures.

At two years, I am more than halfway through with this PhD program, which was the reason why I stepped onto European soil in the first place. France and Belgium – I’ve grown to love both of my host countries day by day. Doing science in such exotic lands has never even crossed my mind say, five years ago. Of course, this European adventure brought me so much more than just academic advancement. After all, what would I have gained if I stayed only in Bordeaux and Louvain-la-Neuve – odd combination, now that I think about it – without expanding my reach beyond the horizon of possibilities?

Being in a co-tutelle, I am involved in a collaboration between two labs in two cities, meaning I hop between the labs fairly often. In terms of time spent, the Bordeaux-LLN ratio is much closer to 50-50 than originally planned, which surprises me even today. At the beginning, I was anticipating something like spending 80% of my time in Bordeaux and 20% in Louvain-la-Neuve, but in reality, I’ve spent almost an equal amount of time so far in my labs in both cities. People ask me if I ever get tired of switching cities every few months, running around, packing and unpacking and repacking over and over again. To be quite honest, yes, I get tired, but strangely, I enjoy this mobility, even if it means having to look for housing in Louvain-la-Neuve in advance every single time (so far, 5 different places). 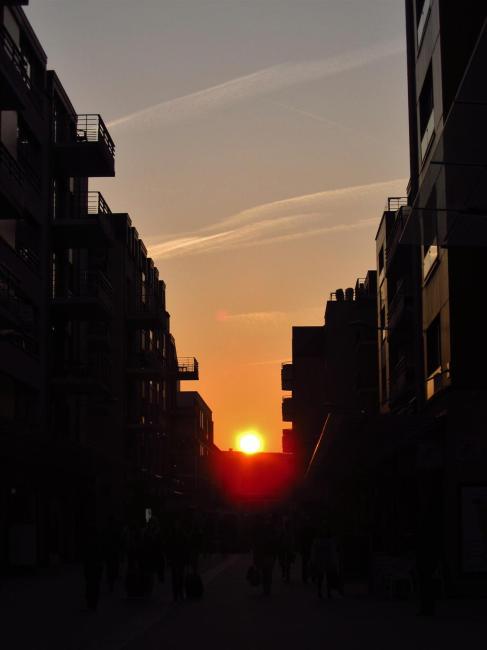 I’ve seen some of the best sunsets in Louvain-la-Neuve, one along Rue Charlemagne as I was walking home from work. Yes, even a little place like LLN has its charm.

END_OF_DOCUMENT_TOKEN_TO_BE_REPLACED

Waterloo: Five years in a day

Leave a comment Posted by Annie Bananie on September 29, 2012

On Friday, September 21st, 2012, I went back to the University of Waterloo for the opening ceremony of the new Quantum Nano Centre. It was in Waterloo that I spent five years doing my undergrad studies in nanotechnology engineering, and since my convocation in June 2010, I haven’t been back. Within the past two years, I was told that much has changed, so I took this opportunity to revisit my alma mater, on the day before my departure for Europe, ending my 3-week vacation in Canada.

I took the 7:15am Greyhound bus from downtown Toronto, but getting to the bus terminal was an adventure on its own. First of all, I assumed that at 6am, Finch buses would be pretty much empty, but I was severely wrong as the bus I hopped on to was full of sleepy people trying going to work. Then at Finch station, I took the subway southbound and made the mistake of getting off at Bloor because I thought the bus terminal was at Bay and Bloor. I asked some guy at Starbucks and was told that it was at Bay and Dundas, three major blocks down the road. Oops. Having a relatively good idea of the distance scale of downtown Toronto, I knew how far away that was, and with 15 minutes left, was I going to run for it and hope I make it, or just try to catch the next bus instead? I dashed forward down Bay but after 5 minutes realized that there was no way I’d make it. About to give up, I reached for the nearest TTC bus stop and saw on the schedule that a Bay bus was supposed to arrive in 2 minutes, so I crossed my fingers and waited for that 7:09am TTC bus. YES, IT CAME ON TIME. Even though I had to pay an extra token to get on, I arrived at the Dundas terminal at 7:11am and made it for the Greyhound bus. Yahoo!

So, note to self – make sure you know where you’re going BEFORE you actually go (has it been THAT long that I had forgotten where things are in downtown?) and don’t hate on TTC…the bus COULD actually come on time!

Alright, the bus got me to Waterloo at 8:50am, in time for the opening ceremony at 10am. Of course, aside from this ceremony itself, a greater purpose of this visit was to see my campus again and relive the best five years of my life in one day, in 2012. Here we go.

About this QNC, the construction started in 2008, if I remember correctly. Of course, it being completed in 2012 meant that three nano classes that have graduated already (including mine, which was the first ever batch) never got to use any part of it. I vaguely remember the administration telling us that the building would be done before we graduated, but I know better now than believing the words of administration. So, the appearance of the QNC is supposed to resemble that of a carbon nanotube, which I guess is depicted by those hexagonal shapes on the right. To be honest I was a little disappointed. I was actually expecting something like a cylindrical structure, that would have been cool. Unfortunately I didn’t get to tour the inside of the building; I left right after all the speeches were done at the opening ceremony to join my friend for lunch.

END_OF_DOCUMENT_TOKEN_TO_BE_REPLACED

Wait, what do you mean I’m doing a PhD…Part 2

So, I should probably start this entry with the situation that I’m in right now…or rather, a PhD student’s daily 5-minute meditation in the morning.

END_OF_DOCUMENT_TOKEN_TO_BE_REPLACED

Not enough time for Leuven

I’ve been to Leuven, but I’ve never written about it. In fact, I’ve been to Leuven four times last year, but each time I went, I headed directly to a specific meeting point for fellowship, and never explored the city beyond the route that I took.

To introduce Leuven a bit, it is in the Flemish region of Belgium, which means people there speak Flemish, not French. Leuven is located north of Louvain-la-Neuve and east of Brussels, forming an equilateral triangle on the map. Leuven is home to the Katholieke Universiteit Leuven (KUL), which is directly related to the Université catholique de Louvain (UCL, where I am at) as UCL split from it in 1968. I don’t know the entire history behind the event, but due to some language tensions, what used to be known as the Catholic University of Leuven split into KUL and UCL, and UCL “moved” to Louvain-la-Neuve in Wallonia, providing French-language instruction.

My visits to Leuven generally began at the train station as I arrived at around 19H00. Then I would stroll down Bondgenotenlaan (name of a street) until I got to the Grote Markt and took a turn onto Naamsestraat (another street name) until I reached my destination at 19H30 for the start of fellowship. At the end of fellowship, I took the same route back to the train station at 22H00 in order to catch the last train back to Louvain-la-Neuve. Unfortunately I don’t attend this fellowship anymore due to the tight timing. Sometimes I can’t make the train that gets me there on time, and leaving early at 22H00 doesn’t give me much time to mingle at all 😦

The few times I was there, however, I really liked Leuven. The wide streets and the gorgeous Gothic architecture were certainly refreshingly different from Louvain-la-Neuve. I’m sure there’s much more to see beyond the limits of the city centre, and it’s a trip I’ll have to re-take one of these days, when the weather is slightly better.

The silhouette of an unknown structure glowed prominently straight ahead of me as I walked down Bondgenotenlaan, towards the Grote Markt. In October last year, I usually arrived in Leuven right before sunset, just as the sky was turning dark. This was taken during my first time in Leuven, and that silhouette really stood out and amazed me.