For some reason, Oxford became my dream university in highschool. I think one day I just woke up and decided that it would be super cool to go to Oxford, and for a period of time I actually looked into the undergrad programs that were offered and the admission requirements. Of course that “dream” never materialized for many reasons, but I still thought that one day I would like to visit this prestigious Oxford University. That day came more than ten years later, after I’d finished my undergrad AND PhD degrees. I’m working in the UK – there’s almost no excuse to NOT go and see what Oxford is all about especially since I’ve already been to its biggest rival, Cambridge.

When I arrived in Oxford, I was forced to make a detour from the main area because it had become some sort of crime scene with a lot of police presence. Huh. No details on what happened, but it was a few hours before the area was open to the public again. At least the entire university wasn’t off-limits, phew!

The first place I headed to was the University Church of St. Mary the Virgin, where I was able to climb to the top of the tower to get a panoramic view of Oxford. From there I was able to get a first impression of Oxford and compare it to Cambridge – Cambridge was a lot brighter and more “golden”, while Oxford gave me a grim and grey feeling. Neither very colourful though…

…and the most recognized landmark of Oxford would probably be the Radcliffe camera, pictured above. It’s only accessible to students so I wasn’t able to view its interior, but it was certainly a rather lovely piece of architecture.

Next I went to the Bodleian university library, and just being on the outside made me feel like I was surrounded by an air of scholarship and academia. Again, the library was off-limits to the general public unless it was via a paid, guided tour, which I opted to skip. One part of the library that was accessible, however, was the School of Divinity, which was just one chamber/hall behind closed doors beyond the main gate of the library. 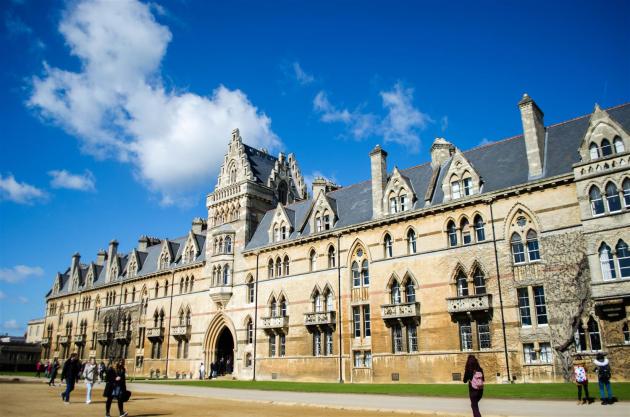 While in Oxford I joined a free walking tour of the city with Footprints Tours, where our enthusiastic guide Tom took the group around Oxford and enlightened us with many historical facts and stories. One of the sites that we passed by was Christ Church, a massive college that has apparently produced the most prime ministers out of any college in Oxford and Cambridge. 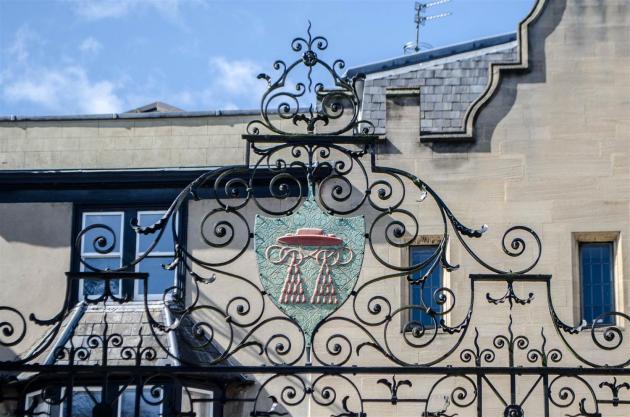 One of the most interesting things I remember Tom telling us was the story behind the emblem of Christ Church. Well, there wasn’t much of a story, but when he told us that the emblem initially made him think of a UFO sucking up humans on either side, that image got stuck in my head. YOU CANNOT UNSEE IT. Rather hilarious, if you ask me! 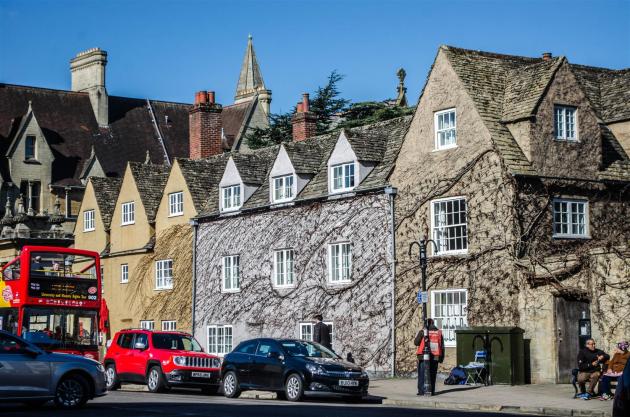 Along the way I saw three houses in a public square that were adorned by long winding branches, which actually gave it an aesthetic effect.

On the High Street of Oxford, Tom pointed out a building on the corner that now houses a currency exchange office, but he asked the group to guess what the purpose of the building used to be. Maybe one of the gentlemen did his history homework, but he immediately answered, “Brothel”, which was the correct answer! Well done, sir…?

Finally it was time for the obligatory group photo. Tom asked all of us to jump while he attempted to take the photo, and jump I did, though I doubt everyone in the group did the same! Heh, it had been a fun and informative tour, giving me some insights to what life might have been like had I had the (mis)fortune to attend Oxford like I wanted to. But I’m glad I went to Oxford, only as a tourist, and not as a student, thank you very much 😛

Day three of the Portuguese trip brought me to a few unexpected places. To start with, I didn’t have any plans at all. It would be a day when I let Mr. DS take me around in his car, since he’d know better where to go. I thought we’d mostly be exploring Lisbon again, but the first thing Mr. DS said was, “I’m gonna take you to Cascais, it’s such a nice place.”

Then he asked me if there were places I’d like to go to. I told him that I had originally planned to go to Sintra, but ended up heading to Óbidos with my friends instead. He thought for a little bit and told me, “You know what, I’ll take you to Sintra as well, it’s not so far from here.” Wah, extra plus!

Cascais is approximately 30 km west of Lisbon, and Sintra is another 20 km or so to the north. After having a light lunch by the sea in Cascais, we hopped onto the car and as I thought we were going to Sintra, Mr. DS decided that on the way there, we’d stop by Cabo da Roca first. Ah, what a spontaneous guy! Where exactly ARE we going?!

This is Cabo da Roca, supposedly known as the westernmost point on continental Europe. The view of the sea and the cliffs was simply breathtaking! This is why I was so glad to have Mr. DS, the most authentic Portuguese I’ve ever know, as my companion during the trip. Of course, the car helped greatly. Without Mr. DS, I would definitely have missed out on this detour, which was one of the best part of the day. It was a windy day, alright, more so by the sea!