Finally, I am writing about my trip to Brittany and Pays de la Loire during the Christmas holidays. It was almost a last-minute plan. I wanted to go somewhere far for Christmas (Prague or somewhere in Italy), but could not find anyone to go with. By the time someone DID want to go with me, prices for everything had been completely jacked up. Boo.

So, I decided to go solo. I wanted to just go SOMEWHERE outside of Bordeaux. It didn’t even have to be anywhere far anymore; I just needed to be alone for a few days. Well, I suppose Nantes and Rennes were far away enough. Nantes is a 4-hour train ride north of Bordeaux and Rennes is a further hour north of Nantes.

Not many people knew where I went during the four days after the Christmas meal. It felt a bit like a secret escape, actually, and I liked it. (See all photos.)

Nantes, the capital city of the Pays de la Loire region in the north west of France, was historically a part of the region of Brittany (Bretagne in French). In fact, it was the capital of Brittany before it officially separated from the region, and that’s why the city still retains much of its culture from its Breton roots. 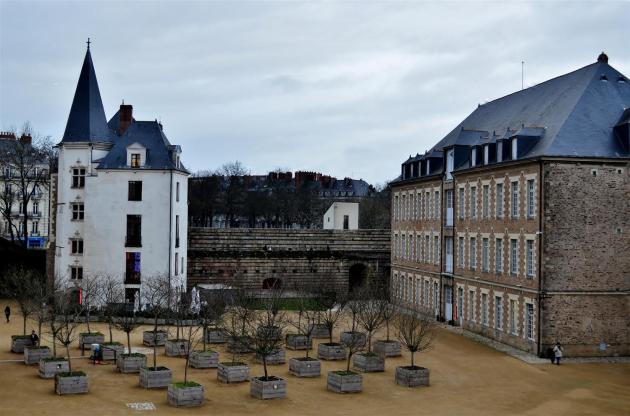 The Château des ducs de Bretagne is a prominent structure situated right in the city centre of Nantes, close to the train station. Back when Nantes was part of Brittany, the castle served as the residence of the dukes of Brittany. Today, visitors are allowed to take a walk around the various parts of the castle and its courtyards that are surrounded by old walls and ramparts.