Leave a comment Posted by Annie Bananie on April 7, 2016

Almost a year and a half have passed since the last “From high places” post was published. Since then, I’ve been back in Europe – specifically the UK – and certainly have visited more high places throughout my travels. I think it’s time for a part 5 😉 (List in alphabetical – not chronological – order as usual. Check out the previous posts on the “Series” page.)

Budapest (read about it) 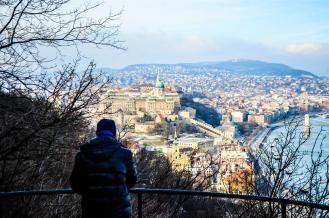 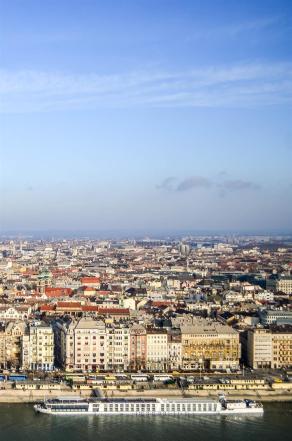 The “Pearl of the Danube” is a place that made me feel something special. Budapest is one of those places that is not only exciting for travel, but one of the few cities I’ve been to where I think I’d actually enjoy living. The view of Budapest from Gellert Hill exposed the grandeur of the Hungarian capital, and the winter chill embellished the beauty hidden within its sad histories.

Český Krumlov (read about it) 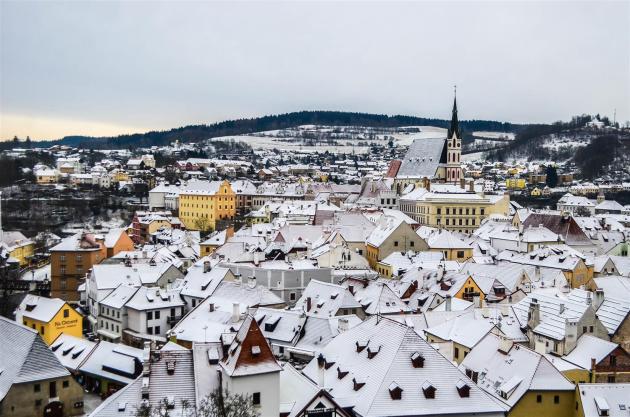 Český Krumlov is the stuff that fairytales are made of. Thanks to a suggestion on my travel checklist, the little Czech town has been on my list of destinations to visit for years before I finally got to it in the winter of 2014, just in time for the first snowfall of the winter! The little town glistened in the snow and exposed its beauty flawlessly – how exquisite!

Edinburgh (read about it)

As one of the many cities with the name “City of Seven Hills”, there is no shortage of high points from which to gaze upon Edinburgh, the lovely Scottish capital. So far I’ve only climbed Arthur’s Seat (where the above photo was taken) and strolled around Castle Rock, though Calton Hill is definitely to be visited soon.

I left my group of friends and took a spontaneous detour from Cologne last year and headed to Königswinter. From there I ascended Drachenfels, a hill at a height of ~300 metres. It was a hiking break from a mostly city-oriented trip. From the top of the hill, the town of Königswinter was clearly visible along the Rhine river.

In Leipzig, my friends and I stayed in an apartment on the 4th (or 5th?) floor, high enough to get a good view of the city from the windows (the only location in this list that was indoors). 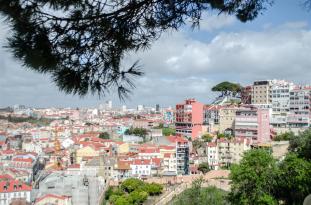 Another “City of Seven Hills” is Lisbon, a city that has a special place in my heart because one of the most influential teachers in my life came from Lisbon. Third visit to Lisbon recently, and the city was still as charming as ever with vibrant colours dotting its prominent hills. The many “miradouros”, or viewpoints, required a lot of legwork through winding streets and up steep steps to reach, but these views were worthy of the sweat!

I went to Madrid this year to see a friend who was studying there. This would be my second visit, but my first time seeing the city from a high place – Cybele Palace, which is also the city hall and my favourite building in Madrid. Looking west (I think it was west), I saw snow-capped mountain ranges in a distance and wondered where that was. Could they be the Sierra de Guadarrama mountain ranges? 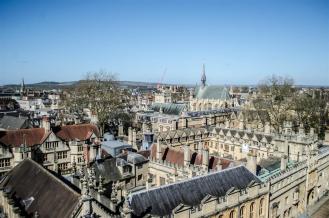 Oxford used to be my dream university in high school for no valid reason at all, other than the reputation that attracted me when I was still a teenager. Well, I never got to study in Oxford, but at least I finally got to see what it’s all about during a visit two weeks ago. I constantly compared Oxford to Cambridge during my walk around the city mostly because of the well-known rivalry between the two universities and the fact that I had already visited Cambridge. Still, to me both places are just tourist destinations – let their rivalries entertain themselves 😉

Prague (read about it)

I had high expectations for Prague and while it was a lovely destination, it felt a bit underwhelming after the visit to Budapest a few days later. Don’t get me wrong, I liked Prague – I just liked Budapest a lot more 😛 What’s undeniable is that the view of Prague’s old town from the Petrin tower (where this photo was taken, if I remember correctly) was nothing short of spectacular!

Note: This post didn’t include hiking destinations in Scotland, such as Callander Crags, Kinnoull Hill, Conic Hill, and so on. Obviously hills are high places, but most hiking adventures have already had their own dedicated posts, deservingly so 😛

I’m currently in the middle of a week-long trip in Portugal and Spain (Madrid at the moment), visiting a friend who is studying in Madrid and joined by some other friends coming all the way from Canada and the USA. I’ve previously visited the three main destinations of our trip – Lisbon and Barcelona in 2011, and Madrid (and Lisbon again) in 2013. Lisbon was definitely my favourite out of the three, but revisiting all three of these major cities one after another will give me a whole new perspective, especially after so many years already.

Alfama district, Lisbon, Portugal in March, 2016 – Looking down onto an alley leading up to São Jorge Castle.

We left Lisbon this morning and arrived in Madrid, and in three days we’ll be in Barcelona. In Lisbon, we got to see some of the places that I missed during the previous two trips, including the Alfama district and the areas around Sintra. For Barcelona, one of my greatest regrets was not entering the Sagrada Familia when I was there five years ago, and now I finally have a chance to make it happen. So, while I don’t get to visit new cities during this trip (except for Córdoba as a day trip in two days), I do get to have the new experience of travelling with buddies with whom I’ve never travelled before, and going back to the places that I’ve missed in the cities previously explored. I do hope to write about these experiences when I return to Glasgow – that is, if I don’t get swamped with work. Oh well, let’s not think about work at the moment – let the travels continue!

END_OF_DOCUMENT_TOKEN_TO_BE_REPLACED

Another year has passed by since the last “From high places” post (part 1 here), and since then, I haven’t stopped collecting photos of city views from high places. Here I present to you part 3 of the “From high places” series. As always, the list of cities is in alphabetical and not chronological order of visit. Enjoy!

Bordeaux (read about it) 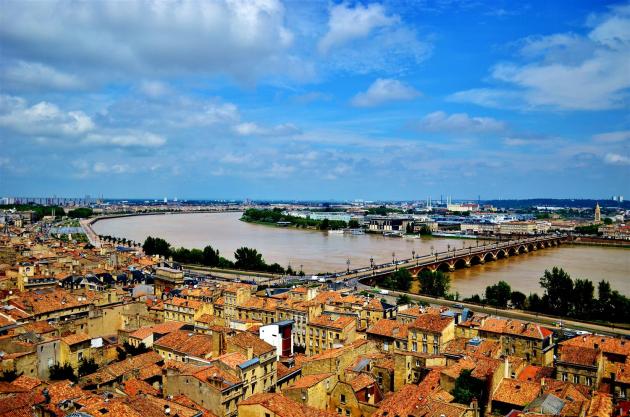 Bordeaux has already been featured in part 1 of the series, where the view was from the top of Pey Berland. Here is the Port of the Moon (a beautiful name for the city of Bordeaux due to the crescent moon shape of its port) from the top of the St.Michel cathedral. Only after almost three years of being in Bordeaux did I think of ascending the tower, and I was greeted with such a gorgeous view of the Port of the Moon! The aged, orange roofs lining the streets of old town Bordeaux, with the Pont de Pierre crossing a magnificent Garonne. To say that I really miss Bordeaux is an understatement 😦

END_OF_DOCUMENT_TOKEN_TO_BE_REPLACED

Day three of the Portuguese trip brought me to a few unexpected places. To start with, I didn’t have any plans at all. It would be a day when I let Mr. DS take me around in his car, since he’d know better where to go. I thought we’d mostly be exploring Lisbon again, but the first thing Mr. DS said was, “I’m gonna take you to Cascais, it’s such a nice place.”

Then he asked me if there were places I’d like to go to. I told him that I had originally planned to go to Sintra, but ended up heading to Óbidos with my friends instead. He thought for a little bit and told me, “You know what, I’ll take you to Sintra as well, it’s not so far from here.” Wah, extra plus!

Cascais is approximately 30 km west of Lisbon, and Sintra is another 20 km or so to the north. After having a light lunch by the sea in Cascais, we hopped onto the car and as I thought we were going to Sintra, Mr. DS decided that on the way there, we’d stop by Cabo da Roca first. Ah, what a spontaneous guy! Where exactly ARE we going?! 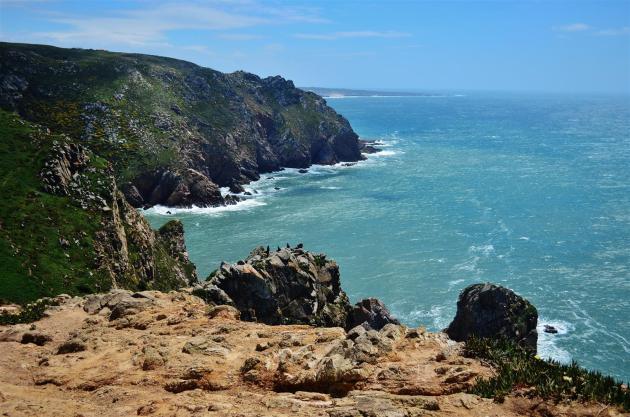 This is Cabo da Roca, supposedly known as the westernmost point on continental Europe. The view of the sea and the cliffs was simply breathtaking! This is why I was so glad to have Mr. DS, the most authentic Portuguese I’ve ever know, as my companion during the trip. Of course, the car helped greatly. Without Mr. DS, I would definitely have missed out on this detour, which was one of the best part of the day. It was a windy day, alright, more so by the sea!