Łazienki Park (“Ła” is pronounced as “wa”) was my final stop in Warsaw and I almost didn’t go. It hadn’t been on my list of places to visit but I had about two hours before I had to head to the airport, so I dropped by for a brief stroll. And thankfully I did because it became my favourite part of Warsaw. The park was larger than I had imagined and thus within the two hours, I barely covered a small part of this urban paradise. Such a treasure waiting to be discovered…

Idyllic representation of a city park, surrounded by peace and serenity. Not a fan of the signs of urban life in the background (white high-rise building) but that can’t be helped in the city center. 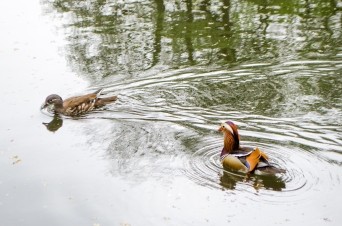 Vibrant signs of life are to be seen everywhere around the park. Among them, a gorgeous mandarin duck caught my attention, as did several playful red squirrels here and there. And a gentleman in stone…??? 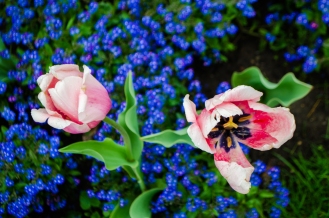 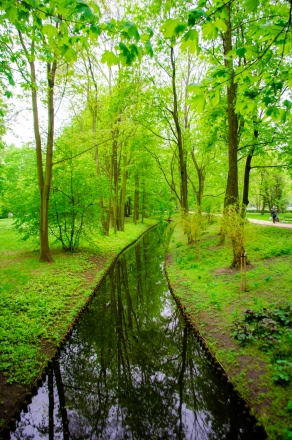 Flowers were in full bloom in late spring and the lush greenery made me forget that I was still in a city. 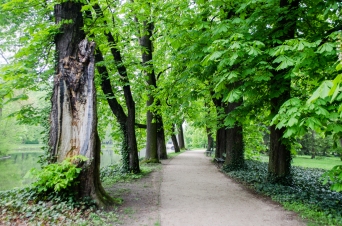 More wandering around the park before heading to the airport, ending my short Polish weekend getaway.

Finally, the peacock. I’ve already mentioned him in the “Beautiful things in Warsaw” post but I can’t resist showing him off again here. First and possibly the only time in my life seeing a peacock opening up his train (new terminology learned, thanks Wiki) to assert his reign. Stole my heart right there ❤

Warsaw was three weeks ago but I still want to note down the highlights that made this weekend trip especially memorable. Perhaps they’re not exclusive to Warsaw, but the city became just a bit more beautiful than it already is, because I had these experiences there.

Rain was in the forecast but I didn’t expect a thunderstorm, especially not while I was on top of the Palace of Culture and Science, the most prominent building on Warsaw’s skyline. And I was thankful to have a shelter from the rain, though I did have to face my fear of thunder. Then I thought, why not turn this fear into a photo opportunity?! I’ve never successfully photographed lightning before, and with streaks of lightning before my very eyes every minute or so, at the perfect angle, there was no reason not to try. And this is the result. Definitely not trivial to get the timing right but I’m happy with the outcome. (P. S. Whoever it was on Tripadvisor that said that Warsaw is not a great city to be viewed from above…how utterly mistaken you were!)

Łazienki Park is an urban oasis that is full of colour, full of life, full of surprises. Among the scurrying red squirrels and graceful mandarin ducks, this king peacock decided to show off his flashy robe in front of an excited crowd while not even batting an eye. “See how stunning I am,” he seemed to say. I’ve seen peacocks plenty of times before but this was the first time I’ve seen one spreading his feathers fully. Too beautiful for words.

I’ll finish this post before heading back to Bordeaux from Annecy, as I will have A LOT to write next week about this training school I’m attending that is nearing the end.

In the last part of my March getaway with LY, we arrived in Toulouse, a relatively big city in France. Toulouse is between Bordeaux and Carcassonne, so after our little stop in Carcassonne, LY and I took the train back to Toulouse and stayed there for the night before heading back to Bordeaux on Sunday night.

The first thing we did after we dropped off our stuff at the hotel was find food and head to the riverside for some night views of the city. On our way, we passed by many areas where nightlife was thriving and crowds and crowds of drunk students were partying. Ha, it was a Saturday night, what else did we expect! We arrived by the Garonne river, the same that traverses Bordeaux, to a gorgeous view of the Pont Neuf and the quais, yet in my opinion, still not as gorgeous as that of Bordeaux 😉

END_OF_DOCUMENT_TOKEN_TO_BE_REPLACED

Last Saturday I went to Liège for the second time, again to visit my friend who studies there. I was getting a little stressed, and I felt like going some place where I could relax a little.

Last time I came, all I did was chat. There was no time for picture-taking, and in fact, that trip was made with the decision of taking no photos in mind. This time, however, I told my friend that I intended on snapping some photos of Liège as we strolled around the city, so he would know what was up if I stopped randomly in the middle of the street.

Compared to some of the other cities in Belgium, Liège is much less touristy. No water canals like Bruges, saxophone bridge like Dinant (although Liège lies on the Meuse River as Dinant does), and no Grand Place like Brussels. I can’t think of anything Liège is famous for other than its waffles. And once again I missed them.

I ended up taking not as many pictures as I had wanted because I wanted to focus on catching up with my friend, and when I did stop to shoot, they were quick snaps. Here’s what I’ve got. 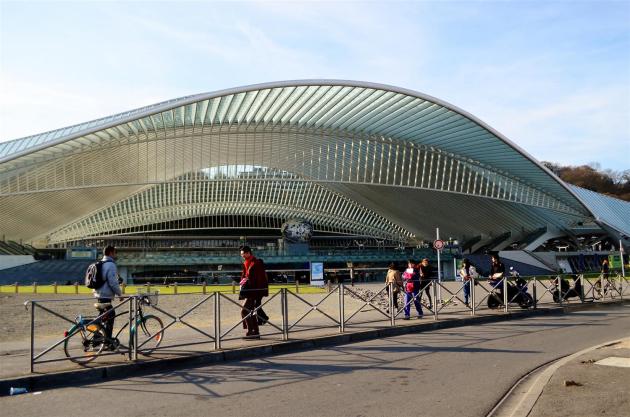 The Liège Guillemins train station is probably the fanciest station that I’ve seen so far and as my friend says, the coolest looking thing in Liège (and there aren’t many). Pretty impressive welcome for a visitor.