During my undergrad years I had the privileged opportunity to go abroad for internships as part of the University of Waterloo’s co-op education program. These experiences expanded the range of my travels, and even though each was short-lived, each of the cities that I’ve worked and lived in added a new “home” to my journeys. (Read Part I and Part II of the series.)

Hsinchu – A first taste of Taiwan

When my Taiwanese then-boyfriend mentioned the possibility of going to Taiwan for a four-month internship, I knew that I had to seize the chance. After all, it’s not every day that you get to travel to a whole different continent for work experience. Taiwan is so close to mainland China (where I was born) but vastly different in terms of environment and culture. I had already become so unfamiliar with my own country of birth, but to experience a place like Taiwan with such close and intricate ties to China yet with its very own identity – that was a treat that only Waterloo could offer me. So I packed my bags and with my then-boyfriend, we were off to his hometown, Hsinchu, for a work term at the Industrial Technology Research Institute!

A city of motorcycles 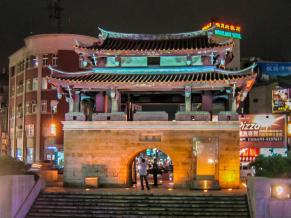 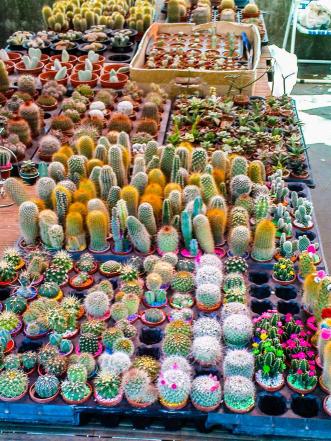 Cacti at a market

One thing I regretted many years after my four-month stay in Taiwan was the fact that at the age of 20 back then, the notion of TRAVEL didn’t really occur to me. Aside from Hsinchu, where I lived and worked, I only visited Taiwan’s large cities, Taipei and Kaohsiung (and briefly Tainan for a lantern festival). If only the idea of travel came to me then, I would have spent so many weekends exploring places like Taichung, Taitung, Pingtung, Kenting…and all the places of beautiful nature! The Alishan area, the Sun and Moon lake, Yangmingshan…ah, what I’d give to go back and recapture what I’ve missed! However, that is not to say that my stay in Hsinchu was wasted – quite the opposite, in fact. I got to know what it’s like to live in a city where motorcycles ruled the streets, where political fervour resulted in my Chinese identity being a subject of interest during a time when the 2008 presidential elections were happening, and where street food was my heavenly consolation for everything! Yes, Taiwan is famous for mouth-watering street food everywhere, whether in night markets where you could find more varieties of food than you could name or in inconspicuous booths or shops in the corner where a bowl of shredded chicken on rice might be the best meal you’d have in a week. Writing this has just inspired me to do a whole post on street food in Taiwan after the “home” series…stay tuned!

The final internship of my undergrad years took place in South Bend, an American city that is probably known to a few but is home to the University of Notre Dame, where I did my research. It wasn’t quite by chance that I got a second international replacement. Knowing that with eight months of international experience, I would be able to get an “option” added to my degree, I actively sought a second international work term by only applying for jobs that were outside of Canada. By a streak of luck, I landed myself a job at Notre Dame, in South Bend, an hour and a half away from Chicago and this time, for an eight-month term! 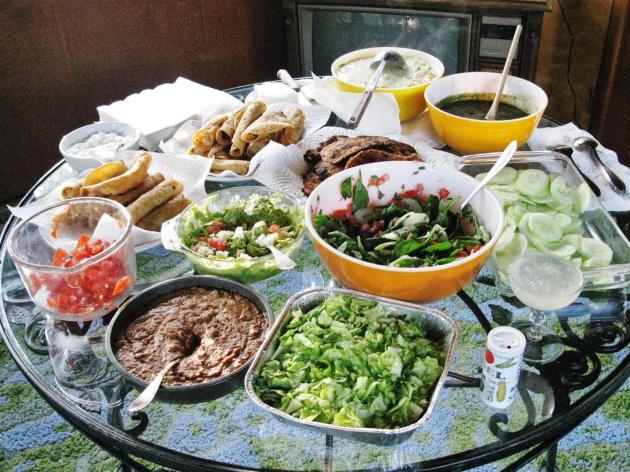 The winter of 2009 was a frigid and snowy one, especially in South Bend where lake effects were prominent, yet it was beautiful! Living in Glasgow now, I will still say that I would always prefer snow over rain, even if it means I will freeze! The eight-month work term was long enough for me to get to know my housemates and lab colleagues quite well, and for once I felt like I had sufficiently integrated into a work place that I was actually quite sad to leave. The joys and drawbacks of mobility always have to be taken into account – you get to know so many wonderful people with whom you become friends but in the end, parting is inevitable. I will always remember the big Mexican feast that was hosted by the Mexican kid Aaron in our lab…at OUR Canadian house, FOR the Canadians! In fact the house had been designated as the official “Mexico-Canada embassy” in South Bend! How I missed those times!

This concludes the “internship” version of “The Places I Called Home” series, and perhaps it is the most unique of all – short stays, but lovely memories of home. The final part will highlight the two European cities that shaped my mid-20s, the homes that I adopted during the years of my PhD – Bordeaux, France and Louvain-la-Neuve, Belgium. Let’s hope I don’t take another 2.5 weeks to write the next one! >_<

Last December, my dad had the chance to visit France when I was still there completing my studies. He took two and a half weeks off work and went all the way across the Atlantic Ocean to attend my Ph.D. thesis defense in Bordeaux, which was one of the most life-changing moments of my 26 years on this planet. After the defense, we headed to Paris for two days, the nth time for me (where n > 5) and the first time for the father. For him, it was finally time to see whether the Paris that he had heard so much about would live up to his expectations. 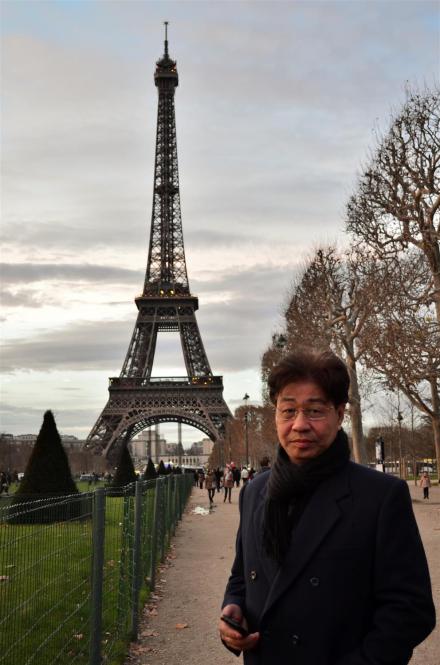 The official “dad is in Paris and here is proof with the Eiffel Tower right behind him” photo. He was generally pretty impressed with Paris, remarking that most of the prominent landmarks (namely the Eiffel Tower, the Louvre, Montmartre, L’Arc du Triomphe) were indeed quite worth the fame and reputation. It must have been somewhat of a culture shock too, since he hadn’t traveled for quite a while prior to this trip, and North America (or Toronto, really) is nothing like Paris in terms of architecture, atmosphere, and customs.

END_OF_DOCUMENT_TOKEN_TO_BE_REPLACED

7th trip to Paris was accomplished with SF as a visitor in October. The only reason I would go to Paris now is to take visiting friends around in the emblem of France, and at this point, only with friends would I find this city any interesting. I’m not going to continue with my “Paris bash” or else everyone would start throwing darts at me…

So this trip to Paris actually brought me to some places I hadn’t yet been to or had passed by but never entered. SF sure made an awesome companion, even though I was quite horrible at navigation and got us lost a few times…oops. I think I made up for it by being able to ask for directions in French. We’re even then, SF? 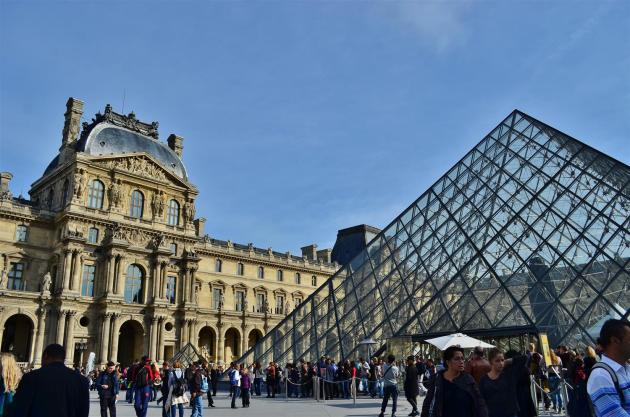 SF and I decided to meet in front of the pyramid of the Louvre after he finished with the exploration inside, but of course, I forgot that the central pyramid is HUGE and that there were many sides where we could have met. Thankfully he did exit from the pyramid as I stood there browsing the faces of the tourists. Bienvenue en France!

END_OF_DOCUMENT_TOKEN_TO_BE_REPLACED

Back to France part 1: Giving Paris a second chance

So this was my second trip to Paris, the City of Lights.

The City of Lights – really? Or is it the City-of-Lights-Only-During-Christmas? Sure, the sun was out this time around and it beat the slightly gloomy skies of Christmas, but my opinion of this city remains unchanged from last time – overrated.

In a nutshell, I was disappointed. Again.

Still, the trip was a blast because I was finally able to meet up with my Indian-Canadian nano-homie, coming from the UK. Travelling alone certainly has its charm, but travelling with a long-time buddy adds so much more life to the trip! For one thing, this entry actually contains goofy pictures of me (how rare is that!) that would never have been possible without someone around whom I felt completely comfortable doing silly things. Also, waiting in line for hours didn’t feel nearly as tedious with someone to talk to. Win-win situation? I thought so!

In terms of the city of Paris itself, I think the pictures from here and here are perhaps much more representative. The pictures here are definitely not as elaborate as the ones from before, but contain some of the more enjoyable bits and pieces from the journey. From some of the captions, you may be able to see why I think Paris is so overrated, but these are merely personal perspectives, so if I offend anyone who loves the city of Paris, it is unintentional, and I apologize!

This is the back of the Sacré-Coeur at Montmartre, in a secluded little garden where few people sat on benches and read under the afternoon sun. I rather liked this view. It is not as well-known as the typical front view of the basilica, yet nicely layered and asymmetrical. The garden was also serene and peaceful, away from most tourists and visitors.

END_OF_DOCUMENT_TOKEN_TO_BE_REPLACED

On December 27th, 2010, I embarked on a 4-day journey to Paris, the first European city visited outside of Bordeaux. Paris was actually not my first choice, but considering that I still haven’t received my residence permit, I settled for Paris in order to avoid any potential issues regarding re-entrance into France.

Paris, the city of lights, is supposedly the most romantic city in the world.

Okay, I don’t mean to burst anyone’s bubble or sound pessimistic, but if I were to sum up my trip in one sentence, it would be exactly that. That is not to say I did not enjoy my trip, nevertheless. I will never say a trip “sucked” because I think any travel to a new city is worth the experience, regardless of whether it met your expectations or not. If the city turns out to be completely different than what you imagined it to be, that is all the more reason to be fascinated, because you are breaking out of your limited bubble and truly seeing the world for yourself. That is why I love travelling.

Now, prepare for some photo-spam. Mouseover each photo for a brief description and click on it for a larger version. Ready, set, go.

This was the first thing I saw as I wandered out of the metro for the first time. I was actually supposed to be looking for my hotel near Les Invalides, but I decided to be a little adventurous and head out at the St-Michel – Notre-Dame RER station. I didn’t expect the cathedral to be staring right at my face as I exited, but alas, it was there.

Notre-Dame wasn’t one of the buildings that I intended to go into, so I stayed outside and observed the line of people as it moved along into the cathedral. Its grandeur, viewed from the outside, was quite impressive, and I especially liked how it was situated right along the Seine. Right next to Notre-Dame is Hôtel-Dieu, the oldest hospital in Paris.