During my long weekend trip to Northern Ireland with my girlfriends, we stayed in Belfast as the base of our explorations. I did no research what-so-ever before I went and we were pretty much going around the city spontaneously, visiting whatever we could find. As a result, I didn’t actually get to see a lot of the main “attractions” or landmarks of Belfast (though my friends did as they arrived several hours before I did), but we did have a blast doing exactly what we intended – spontaneous exploration 😉 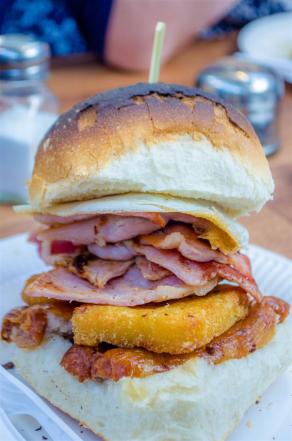 On Saturday morning we headed to St. George’s Market, and it was there that I encountered the almighty CAVE HILL BELFAST BAP. Yup – take your entire breakfast and stuff it between two buns and you’ve got a beast of a sandwich. It’s got an egg, bacon, sausages, and a hashbrown – it was supposed to come with black pudding too, but we opted to leave it out. It was quite appropriately named as Cave Hill is a large hill near Belfast, and just look at that monster! Aside from trying a variety of food from the booths, the ladies and I wandered around and admired the handicraft of the many vendors in the market. I was so in love with the clay critters that were on display that I bought an entire set of eight of them – an elephant, a ladybug, a penguin, a pig, a sheep, a cow, a large snake, and a small snake – and now they sit in my living room ^_^ 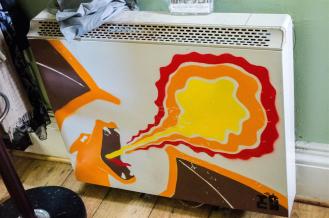 Public art was also aplenty in Belfast. Among the ones we saw was “Eco” by French artist Marc Didou, which stood in Queen’s University. According to a source, “The piece is made in response to the artist’s investigation of digital imaging techniques and represents the reflection of a head refracted in water and the sonic echo used in magnetic resonance imaging (MRI)”. Other interesting ones include a huge political mural (a lady actually stopped to explain its history to us…but sadly I don’t remember what she said) and a Charizard on a heater in our hostel, which isn’t exactly “public” art, I suppose. It certainly seems fitting to have a fiery Pokemon on a heater during the cold winter days – at least it keeps the guests warm! 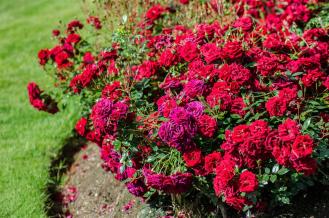 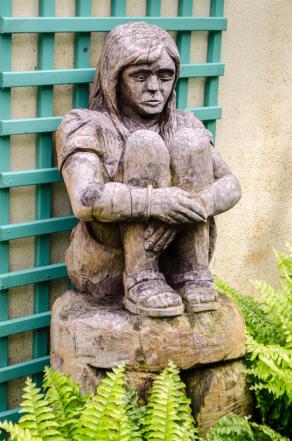 A sculpture in the Botanic Gardens

A rose in the garden

Among our group of girls were two who were flower enthusiasts, so we knew that a visit to the Botanic Gardens was in store. Again the rose garden reminded me of when the Little Prince saw the garden of 5000 roses, each one beautiful but untamed. We ended up spending quite a lot of time in the gardens!

Special attention goes to this beautiful feline, who was in no rush to enjoy the sun in Belfast that day. Badass cats will cause my demise one day. One sharp stare and this beauty has already stolen my heart. 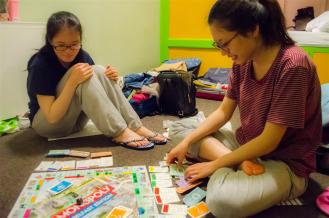 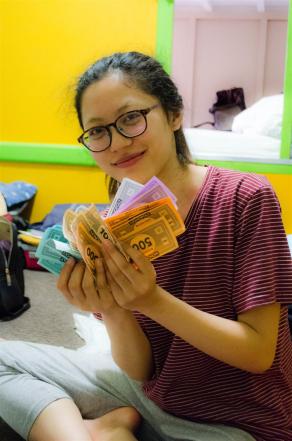 The winner of Monopoly!

On the final night of our stay at the hostel, four of us decided to play Monopoly, which ended up in all sorts of hilarity. Highlights included one girl who kept ending up in jail and me owning the Botanic Gardens so that the two flower enthusiasts kept landing on them and paying me a massive amount of rent (how convenient!) Still in the end, one of them won mercilessly, and even my Botanic Gardens weren’t able to save our “merged corporate” (consisting of the three losers). What fun! 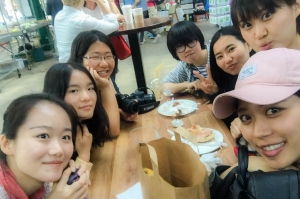 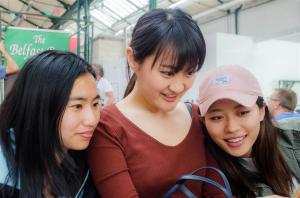 And I will end with some group photos taken with the girls, many of whom have already left. How I loved to see each one of their beautiful smiles! Our memories definitely extend beyond this Belfast trip, and maybe someday in some corner of the world we will reunite as a group again! Next entry: Giant’s Causeway tour!

Prague and its Christmas

Prague is one of those places that was on my “must-go” list of European travel destinations. I don’t know what it is that appealed to me about this city, but the way I discovered the name of the city was through a Mandarin pop song that was released 12 years ago. The literal translation of the song is “Prague Public Square”, and it was sung by Jolin Tsai, a Taiwanese pop artist. When I first heard the song on the radio, I was hooked on its unique style and arrangement, but that doesn’t surprise me now that I know that the melody was written and arranged by Jay Chou. Anyway, we’re not here to talk about music right now. As a 15-year-old kid, the word “Prague” became etched on my mind and when I discovered that it was the capital city of Czech Republic, I was determined to visit it one day. That one day didn’t arrive until almost 12 years later, which brings us to last Christmas.

Ah, yes, Christmas, a magical time. Of course a perfect time for some solo travel too, maybe? As I didn’t manage to find company, I went alone because I wasn’t about to let the lack of a companion stop me from finally going to that place in the song and finding the “Prague Public Square”, if such a place really existed. Prague evaded my plans for two Christmas holidays in a row. I could have gone in 2012, but unexpected circumstances meant that I went to northwestern France instead. Then when my dad visited me in Europe in December 2013, we chose Italy out of several potential options of which Prague was one. So after two tries, nothing was going to stop me from spending my Christmas in Prague in 2014. And one all by myself? Why not? 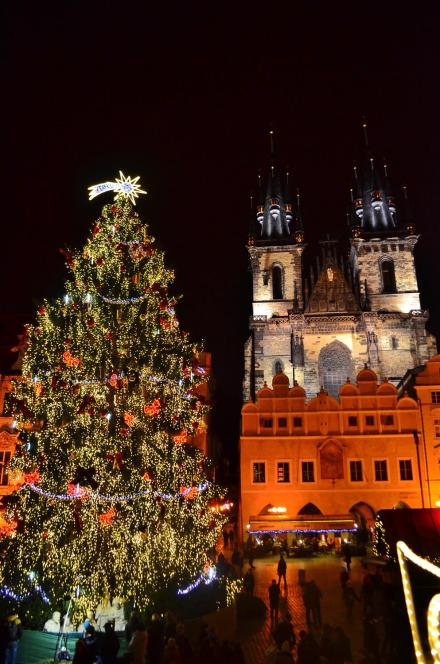 Perhaps a place with the exact name “Prague Public Square” doesn’t exist in Prague, but there are many public squares in Prague and the Old Town Square is definitely the most well known. The Gothic Týn Church (perhaps the one that Jolin sang about in her song) with a luminous glow while a Christmas tree shone in the centre of the square. The Týn Church was really something, kinda made me think that it was the castle of an evil overlord once upon a time. And the fairy tales begin here…

END_OF_DOCUMENT_TOKEN_TO_BE_REPLACED

The Christmas holidays are approaching and since mid-November, the city of Glasgow has been wrapped in Christmas spirit. I will not be spending Christmas in Glasgow this year, and so I took advantage of the festive activities featured in the Glasgow Loves Christmas events taking place over the weeks before the holidays themselves. A trip to the city centre is always a better alternative than staying at home during the weekend – and yes, I’ve moved! More on that in another post…maybe.

It is unfortunate that the true meaning behind Christmas is often forgotten and smothered by the commercialization of the holidays – Santa Claus, reindeer, Christmas trees, Christmas shopping, Christmas lights…the list goes on. Despite this, I don’t deny that the festive atmosphere is a source of warmth for the chilly winter days, and I can’t help but to immerse myself in the celebrations, all the while reminding myself that on this day, the Saviour was born.

Every fair/carnival has to have a Ferris wheel, and the one at George Square is no exception. The last time I went on a Ferris wheel was almost two years ago in Bordeaux, and while viewing a city from the high point of a Ferris wheel was amazing, the HIGH part was a bit more thrilling than I would have liked. There was also a merry-go-round (not shown in photo) at the fair in Glasgow, and for some reason I’ve wanted to ride on a merry-go-round for years now but haven’t found anyone to accompany me. Somehow I just wanted to relive my childhood on a merry-go-round, out of all the children’s rides…for no particular reason. Anyone in Glasgow want to volunteer to go with me? 😛

END_OF_DOCUMENT_TOKEN_TO_BE_REPLACED

Vienna has become a blur in my mind. I visited it some two months ago as part of my week-long (mostly) solo trip to the “east” and Vienna itself took about two and a half days. I had the impression that like Paris, I would need more time than that in order to capture the full essence of the city. Yet, I didn’t feel like I’d need to enter every museum and visit every landmark in Vienna. In these two days, I just wanted to breathe. Breathe, take the new path, eat whatever I wanted, hop on and off the tram and metro whenever I felt like, at any unknown stop – that was how I wanted to explore Vienna.

Vienna’s delicate historic streets and neighbourhoods take you on a voyage through time as you immerse yourself in its grace and charm. Violins, cafés, pastry, schnitzel, Swarovski – these may be some of the words that come to mind when Vienna is mentioned. A city of art, music, architecture, history, gastronomy…

END_OF_DOCUMENT_TOKEN_TO_BE_REPLACED

One of the things I wanted to do before leaving France was to meet my blogger friend, Stéphane (check out his super fantastic blog, My French Heaven), in Libourne. It seemed like an easy enough task because Libourne is about 20 minutes away from Bordeaux by train, but I kept messing up the timing 😦 The meeting finally took place a week and a half ago when Stéphane took some time out of his busy schedule to spend a bit of time with me in the morning. I took a train to Libourne, where I met Stéphane, and off we went to explore the town and its surroundings 😉

The main destination was the market in the town centre, where lots of fresh foods were being displayed. It reminded me of Capucins in Bordeaux, and sometimes I like to take a walk through these local markets even if I’m not doing grocery shopping. The smell of the morning air complimented with fresh fruits, vegetables, meats, and seafood is a vitalizing start of a day!