Well, I went to Riga. And I came back alive, which could be considered a miracle.

Let me start by saying that this past weekend had perhaps the coldest days during this winter season. It was -8 in Bordeaux, and I heard that the city, which rarely sees snow during winter, has been covered in white. I had just flown back to Belgium on Thursday, with a trip to Riga booked the next day. Weather forecast said that it’d be -25 in Riga during the weekend, -36 with the wind chill. Uh oh.

Hmm. Dilemma. The sudden cold attack wasn’t expected. Was I going to be conservative, cancel my trip, lose the flight cost of 50 Euros (which wasn’t all that much, really), or live the spirit of the true north strong and free and put myself through the challenge of the extreme?

Not gonna lie, but it was actually a very hard decision. I was on the brink of NOT going because as much as I’d like to say I’m not afraid of cold, I am. One can be used to cold weather, but not immune to it. And I had been away from those bleak Canadian winters for two years now (not that Canadian winters are that cold anymore, apparently), so I wasn’t sure if I was totally ready for it.

In the spirit of “Do now, regret later, then never regret” (kudos to my role model Geoff), there was no backing out. So I stuffed everything I thought I’d need into my backpack, hopped onto a train to Charleroi, and off I went into the unknown once again.

Latvia in February turned out to be quite a fantastic experience. Okay, it really wasn’t as cold as expected; I think I exaggerate everything in my mind, just to get mentally prepared. Then again, Canada has indeed trained me well for the past 15 years, hah! During my one day and a half in Riga, I made a few notes about the trip and concluded with ten (hopefully convincing) reasons to visit Riga, some particularly pertaining to a freezing February. Here we go! (Click here to see all of the pictures on Facebook.) 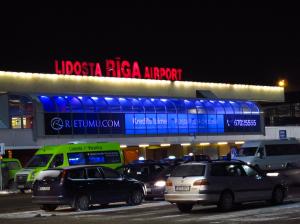 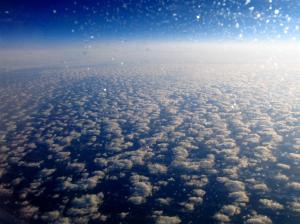 The cheap flight was ultimately what really drove me to book this trip to Riga, with return tickets from Brussels-Charleroi at 50 Euros. Winter probably has something to do with the low rates…go figure. An additional note aside from price: when given the choice, I’ll always choose a window seat over the aisle, whether it’s a flight or a train ride. Only from a window seat can I catch glimpses of breathtaking views like the one above, on the way back to Charleroi. At first I wasn’t even sure if those were clouds or snow islands…but it’s gotta be clouds. I think this is the closest I’ll ever get to viewing the Earth from the universe. Simply spectacular.