July 21st was the Belgian National Day – happy birthday, dear host country #2! I didn’t even say happy birthday to France, who celebrated a week before Belgium.

I did some very brief research on the history of the independence of Belgium. The day was July 21st, 1831, when Belgium declared independence from the Netherlands. That makes this year the 181st birthday of this small yet diverse country that may even be considered a little bizarre. Almost two years in Europe and I’ve spent close to half of my time here – wow.

(Completely unrelated side note: It seems like most of the countries that have held some significance to me at some point in my life has their nation days in July. Canada, July 1st. The USA, July 4th. France, July 14th. Belgium, July 21st. Coincidence?)

There were some events in Brussels for national day, and I decided that instead of staying in Louvain-la-Neuve, I’d head to the capital and spend some time around the city with two friends I met at the church in Brussels. We walked around a bit before deciding that there were way too many people and that we’d never squeeze through the crowd – the police wouldn’t even let us try. Since none of us are actually from Brussels and knew the city well, we wandered away from the parades and shows and crowds to do some exploring of our own. 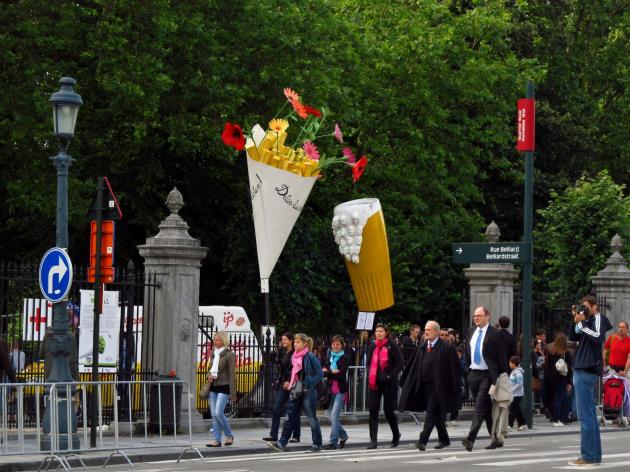 Most of the events took place around Parc de Bruxelles, where the royal palace was situated. Here is one of the entrances, greeting us with two of the foody symbols of Belgium, beer and “French” fries. Yes, the Belgians invented the fries, not the French. There were other delicious goodness scattered throughout the park, including of course chocolate, mussels, and Brussels sprouts. I was surprised that I couldn’t find a waffle though 😦 For more pictures, click here to see them on Facebook.