Leave a comment Posted by Annie Bananie on September 4, 2020

Located in front of the Gallery of Modern Art in the city centre, the Duke of Wellington (sculptor: Carlo Marochetti) is arguably the most famous sculpture in Glasgow and is the subject of an ongoing joke, where a traffic cone is placed on the head of the duke. In fact, I don’t think I’ve ever seen the duke WITHOUT his cone hat. Not exactly sure where the humour originated but hey, I think the orange cone looks quite good on him, wouldn’t you agree? 😉 Lookin’ sharp, even in the rain!

The story of the two following sculptures can be found here. First, Lobey Dosser (sculptors: Tony Morrow and Nick Gillon): “Believed to be the world’s only two-legged equestrian statue, it shows Sheriff Lobey Dosser and his arch-nemesis Rank Bajin riding Lobey’s faithful steed, El Fideldo, or Elfie as she is known.” These are characters in the works of Bud Neill, a Scottish cartonnist popular in the mid-20th century. The sculpture was on Woodlands Road when I took this photo but some time later, when I passed by the same spot, it had been removed. Maybe the sheriff was off to some new adventure elsewhere in the city…

Another one of Bud Neill’s characters, G.I. Bride (sculptor: Ranald MacColl), stands at Partick train station in the West End. This lady carrying a baby was a war bride who married an American GI and went to the USA, and she’s seen here trying to hitch a ride back home to Partick. I found the story quite touching, and I’m glad they made it back home! 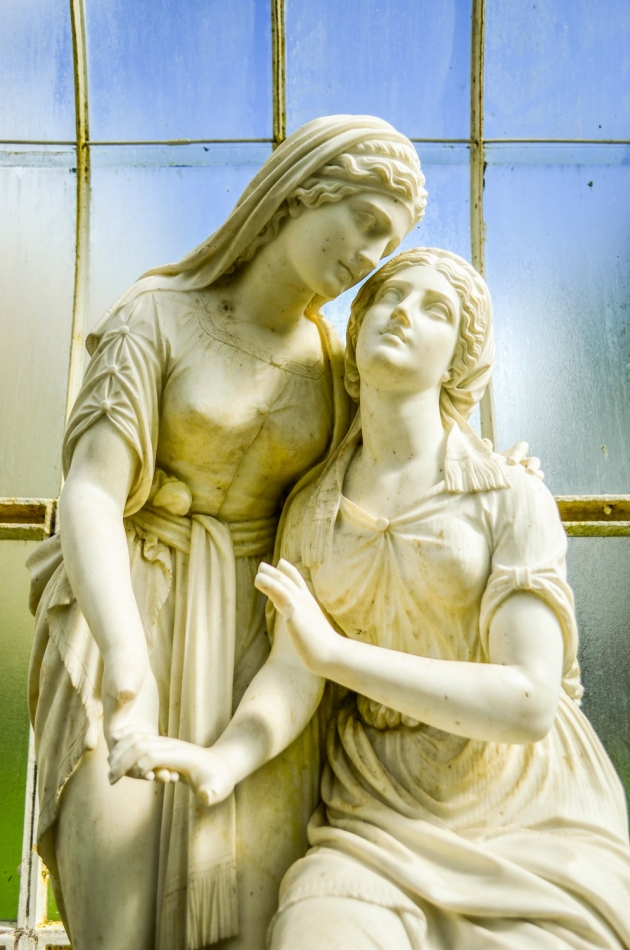 Mary and Magdeleine – The sculpture of Mary and Martha in The Sisters of Bethany (sculptor: Joh Warrington Wood) is one of the fine works of art found in the greenhouses at the Botanic Gardens in the West End. What struck me in particular were the fine details on the sisters’ dresses and in their hair.

The sculpture of Wincher’s Stance (sculptor: John Clinch) at Buchanan bus station was probably my favourite one out of all of the ones posted here. It seems to tell the story of a passionate reunion between two lovers after some time apart. It is more than fitting that such a representation should be found at a train or bus station, a place of many departures and arrivals, separations and reunions.

This is the sculpture out of all of the ones on the list that I knew the least about, and only with some extensive digging on the Internet did I find its name – The Govan Milestone (sculptor: Helen Denerley). I saw it one day as I was wandering around Govan. More information about this sculpture can be found here and here.

The three famous Scottish men portrayed here (confirmed on this web site) are, from left to right, scientist James Watt, trade unionist Jimmy Reid, and mountaineer Tom Weir (there’s a sculpture of him in Balmaha, near the starting point of the Conic Hill walk). 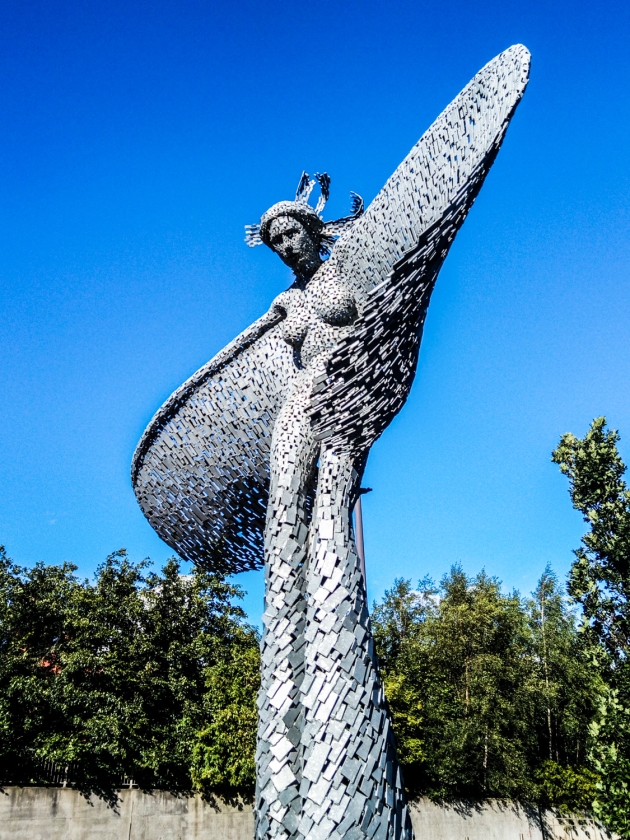 Rise by Andy Scott, creator of the Kelpies. Somehow the angle from which I took this photo made it look like the “wings” of the lady were slanted, whereas if you looked at her from a direct frontal view, they were more or less horizontal. It got me confused for a while and I even wondered if this was actually Rise…

Located in the city centre, Citizen Firefighter (sculptor: Kenny Hunter) commemorates the brave firefighters who have served and fought for the city of Glasgow.

Side view of Diagram of an Object (sculptor: Dhruva Mistry) in front of the Hunterian Art Gallery, next to the University of Glasgow library. What is it exactly? Well that’s up to anyone to interpret, I suppose, and that’s why the “object” isn’t named. At first glance it looked like some sort of chair, but it gradually turned into an abstract image of a parent embracing a child. Do you see what I see?

When I saw the Clyde Clock (sculptor: George Wyllie) outside the Buchanan bus station I thought…somebody must be running out of time! Perhaps that’s why it was there, to remind people running late to hurry up so they don’t miss their bus!

A little something different for this final one – not a sculpture in the traditional sense but one that must have been created purely out of spontaneity. It snowed heavily in Glasgow only once during the 2016 winter season (in January), and someone brought to life this little guy, whom I encountered on my way home. It was a pity that his lifespan was perhaps only one night, but I was glad to have met him before he disappeared 🙂