The second part of my honeymoon in Japan with J was in Hokkaido and the first stop was Otaru, a port city 45 minutes away from Sapporo by train. Several friends recommended Otaru as a day trip from Sapporo, but we stayed there two nights as we wanted to take it easy and enjoy the city to its fullest. From Tokyo, we flew to New-Chitose airport and immediately the cold hit us. It was mid-winter in the northernmost part of Japan, alright!

Like in Hakone, we stayed in a hostel/guesthouse in Otaru, but it felt more like a homestay as the hostel was a large house in a residential area. Otaru itself had a quaint small-town vibe but there was no shortage of tourists, even during the winter. In fact, many people come specifically during the winter for the Snow Light Path Festival, which happened in February and which we unfortunately missed. Still, Otaru had its own charm to offer. 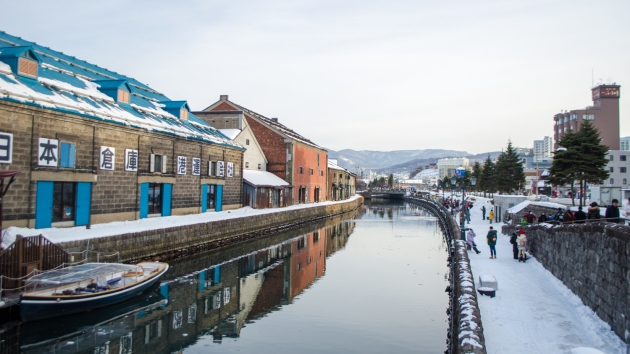 Perhaps Otaru is most well known for the canal that runs right through the city. All of the points of attraction are pretty much within a 20-minute walking distance from the canal, making it where most tourists are concentrated. During the Snow Light Path Festival, the area surrounding the canal is supposedly decorated with hundreds of candles and lanterns that radiate during the night!

To be honest, I’ve seen my fair share of canals so this one in particular wasn’t anything new or fascinating for me, but J and I still had to take the obligatory selfie 😛

Aside from the Otaru canal, Sakaimachi Street is another main tourist attraction lined on both sides with small shops selling food and souvenir, especially hand-made glass crafts, which Otaru is known for. There were also several museums for people who enjoy browsing museums, but neither J nor I was museum-minded, so we skipped most of them.

The exception was the music box museum. Actually, I’m not even sure if we went into the museum part because what we saw was a huge area with perhaps thousands of types of music boxes on sale. They were so colourful and pretty and instantly put me in a delightful mood! I could tell that the quality of the merchandise was top-notch, with a lot of attention to detail on each music box. But of course, the prices were proportional to the quality and we were happy with just browsing around, thank you very much!

Around Sakaimachi Street, there were also some snow sculptures of well-known characters, including Snoopy and Totoro. Also this happy snowman seemed to be completely ready for winter with its blue hat and scarf 😀 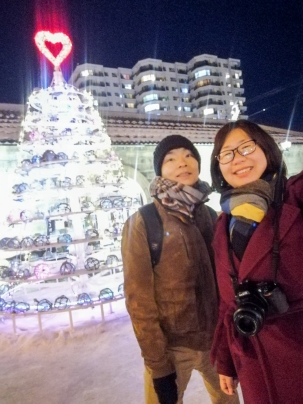 I mentioned in one of the previous posts how grateful I was that we brought a selfie stick along with us, and we certainly took full advantage of it in Otaru. Well OK, maybe J got a bit tired of my constant request for taking selfies together but in the end he gave in 😛 Walking by Otaru canal by night, it already seemed sparkling with light and we thought that it was gorgeous the way it was, so missing the Snow Light Path Festival wasn’t that disappointing after all! 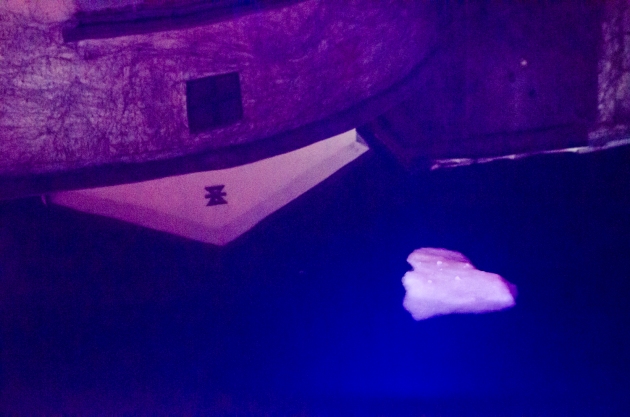 I randomly noticed a block of snow floating in the water and remarked that it looked like a heart. Not long before it disappears completely… 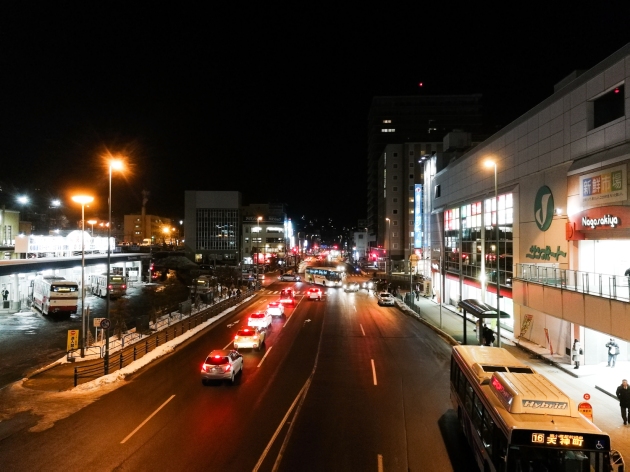 Slowly we made our way back to the hostel, which was a bit of a distance from the city center (approximately 20 minutes on foot). Daylight at least provided some warmth but the temperature dropped quickly and drastically as night fell!

The area around our accommodation was extremely quiet and deserted, with not a single person in sight. It even felt a bit spooky at times but we rather enjoyed the silence and serenity and much preferred them over the bustling lights of city night life. 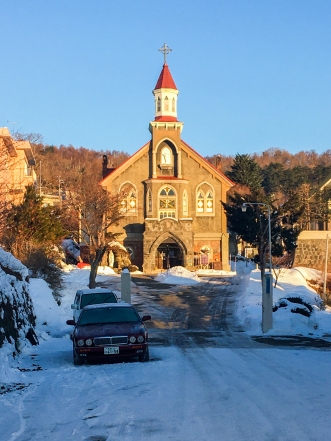 And here are some bonus photos, again from J’s morning run. The things I miss by not going running with him…bah!!! But then again running outdoors in the coldest days of winter, in the snow…again I send my admiration and respect to my beloved husband. He managed to capture some really great views of Otaru on his phone!

Bonus #2: pre-departure from Otaru, at the train station. From Otaru, we would take the local train to Sapporo, where we’d stay for our final three days in Japan. Goodbye, Otaru, it’s been a fun time!

But something else is missing, no? Could it be possible that I didn’t write about Otaru’s…food? Aha, I figured this is enough for one post and saved the better part for the next entry. Coming up next – yakitori and sushi, spoiler spoiler 😉

7 responses to “Honeymoon in Japan, part 4 – Otaru, a winter wonderland”