My stories 01: That time in San Francisco

Leave a comment Posted by Annie Bananie on January 11, 2019

From time to time I remember random bits and pieces from my trip to Boston, San Francisco, and Vancouver in 2017. Earlier, the walk by the waterfront near Fisherman’s Wharf flashed in my head, and the feelings were as prominent as ever. That evening, I took the ferry to Sausalito, but by the time I got there, it was already dark (around 6 pm in mid-November) and there wasn’t much to see. I ended up only staying for maybe an hour before heading back to San Francisco. Then I contemplated whether to walk from the ferry terminal to Pier 39 or take the bus or tram, and eventually decided to walk. It was not a short walk, but it was pleasant as I had the entire time all to myself. When I arrived at Pier 39 (I had originally wanted to skip going altogether because I thought it was probably overhyped), it was a lot quieter than I had expected, without many visitors. I guess that only made sense, as it was already what, 8:30 pm? 9 pm? I don’t remember. Many shops were closing for the evening and the buskers have called it a day – I heard there were buskers, at least. The place even felt a little desolate and melancholic but…I somehow enjoyed the atmosphere. Maybe that was how I already felt, and the environment merely reflected the state of my heart. After a brief wander, it was time to eat a late dinner. I again had to make a decision, this time between expensive fish and chips and the never-failing McDonald’s. Of course, I chose the latter…did that surprise you?! Finally, I took the tram from the wharf and went back to the hostel, ending an entire day spent alone. I don’t know why these scenes from that particularly ordinary evening surfaced in my memory, but it was one of those little moments where I felt completely content in spite of the melancholy, perhaps for no reason at all aside from the luxury of freedom and self-fulfillment. 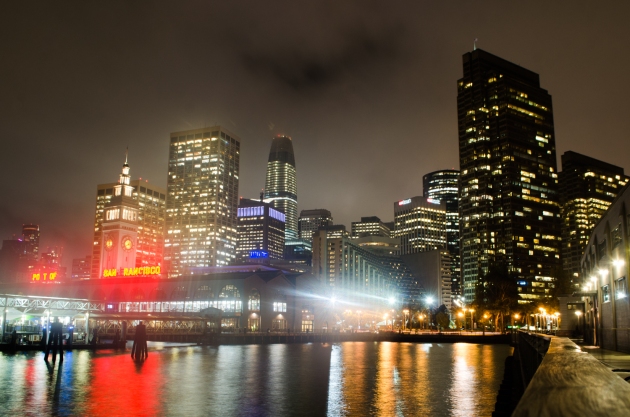 A stroll by the waterfront near the San Francisco ferry terminal in the evening – dazzling urban lights always mesmerize and impress me!