From high places: Brussels and Toronto

Leave a comment Posted by Annie Bananie on August 15, 2017

As I was going through my posts in the “From high places” series, I was surprised to find that I neglected several recent visits to Brussels, one of my favourite cities (if not my favourite) in Europe.

Come to think of it, I went back to Brussels in 2015, 2016 (short stopover), and 2017 (just last week) and each time discovered a new viewpoint. My favourite, notwithstanding the slight reflection of the glass window, would have to be the one from the restaurant at the top of the Musical Instruments Museum. From here, you can see the imposing and magnificent town hall in the Grand Place, as well as the Basilica of the Sacred Heart in the far distance, which I believe is the fifth largest church structure in the world (official source). Lovely buildings – I like both of them very much.

In 2016, I finally got up to the viewing platform at the top of the Royal Museum of the Armed Forces and of Military History. Not as impressive as the previous view, but still quite nice.

And here’s the view on the other side of the viewing platform, facing east toward Merode station.

And last week, while visiting with my dad and sister, I discovered the garden and café on the fifth floor of the Royal Library. The view was similar to the one on top of the MiM, but I certainly wasn’t standing as high, and the view wasn’t as extensive. Regardless, the basilica still looks so grandiose, even if it was so far away. 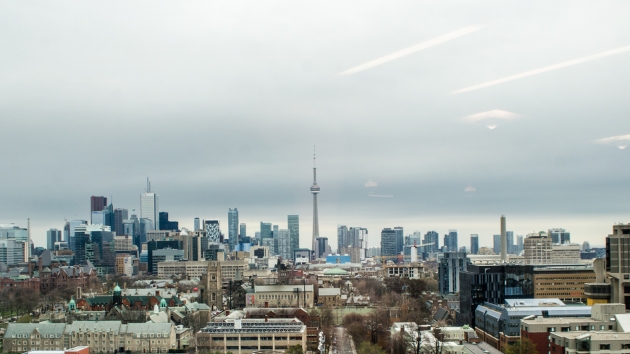 After Brussels, I also found a photo of downtown Toronto that I took this year while visiting the University of Toronto with my sister, from the 11th (I think) floor of the OISE building. I was in a hurry because I wasn’t supposed to be in this room, and someone was entering as I was taking this photo…so I snapped and ran. Lots of reflection in the glass – oh well.

So the post wasn’t ALL about Brussels after all. Sorry, my beloved, but perhaps I love Toronto just as much.