Oban is a neat little place on the west coast of mainland Scotland and a convenient location for onward travel to various places nearby, such as the islands of Mull and Lismore in the Inner Hebrides or the nearby Glencoe and Fort William. For this exact reason, I’ve visited Oban twice but both as “stopovers” – the final destination of the first visit being the Isle of Mull and that of the second being the Isles of Seil and Lismore. That being the case, I didn’t really get the chance to explore Oban in depth during the few hours that I was there each time.

But in fact, the Isles of Seil and Lismore were only the secondary motivation of my most recent visit. I wanted to go to Oban again, this time with a friend, for a very important reason – its amazing seafood! Yes, Oban is known for delicious seafood, and having heard all about it from many different people, my friend XM and I decided to embark on a weekend pilgrimage to the holy land of Scottish seafood. Throw in some hiking here and there, but our goal was clear as day – to eat as much seafood as we could possibly stomach 😛

Let’s start gently with a view of Oban as we set out on a ferry for the Isle of Lismore. In a distance, on a hill, lies McCaig’s Tower, a place that I’m sure offers great views of Oban and the nearby islands but I have yet to visit. Maybe one day when I go back to Oban to actually see the town itself, I’ll get the chance to get up there but for now, McCaig’s remains unconquered! 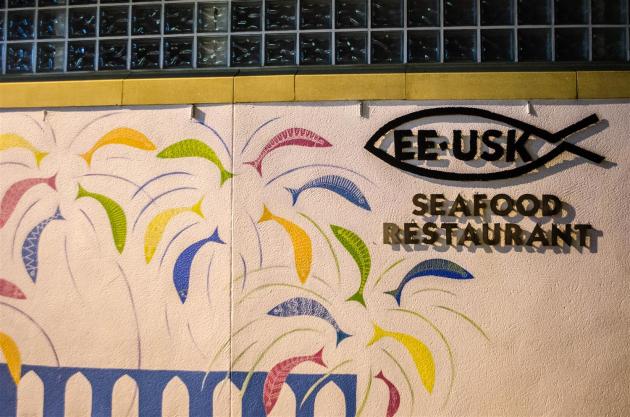 Now, let’s get right into it, shall we. Before heading to Oban, we did some research on the seafood scene in town. There were many choices – you could grab some quick snacks at the local seafood shack right by the harbourfront, or you could opt for a fancier, more high-end sit-down restaurant to enjoy your evening slowly and delicately. We’ve already decided to go for the latter and chose the much acclaimed Ee-Usk, a restaurant that had a queue even at 9pm (I was so glad I made a reservation!) After a muddy hike on the Isle of Seil that afternoon, sitting down for a relaxing meal sounded even more appealing to me, as by then my stomach was growling! 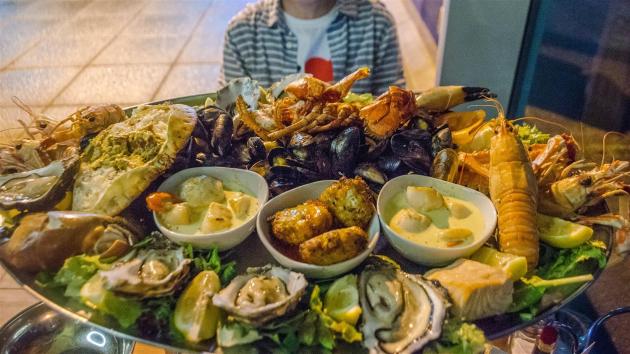 We had a lot of choices but we didn’t want to choose, so we treated ourselves to the most luxurious item on the menu, the ultimate indulgence – the GRAND PLATTER FOR TWO. Make no mistake, this was one expensive meal (£100 between the two of us), but we got to try pretty much EVERYTHING. The menu description of the platter is as follows: “6 oysters, half lobster, dressed crab, king scallops, langoustines, Thai fish cakes, smoked salmon, fresh salmon, mussels, and crab claws”. There was a long period of debate on whether we should get the Grand Platter or not, but with a look of mutual understanding in our eyes, XM and I knew that there was no escape. And so it was ordered. And soon a plate larger than the width of our table was elegantly presented to us, completely full of everything that was described. XM joked (or maybe not?) by saying that she thought the seafood was lying on a bed of ice, but in fact it was a bed of MUSSELS. Holy crap that was a lot of food. How do we even begin to dig in!?

We took it slowly, tasting and enjoying each item on the platter and syncing our paces so that we ate the same things at the same time. This was honestly a once-in-a-lifetime experience that is probably never to be repeated, and everything was SO GOOD AND FRESH AND HEAVENLY. Though, by the end of the meal I felt like I could never eat seafood again simply because that was sooooooo much food for two people…but we finished it – even the lemon slices! The final few mussels took the last bit of space in our stomaches, but there was no regret, none at all. I didn’t think I could ever be seafood-ed out, but in a good way. Good job, Annie. Good job, XM. Good job Ee-Usk. I was impressed, both at the food and our ability to actually finish it all. So worthy.

After the meal we decided to take a walk around the waterfront, even though I was exhausted and wanted to sleep. It did us good to walk around and digest a bit that food we just devoured, hehe. Oban looked quite nice during the night as well, though it’s not a huge city with dazzling lights and glamorous architectures. Then again, these are the kinds of destinations that I prefer over large cities – quaint, cosy, relaxing, inviting, and just fun. 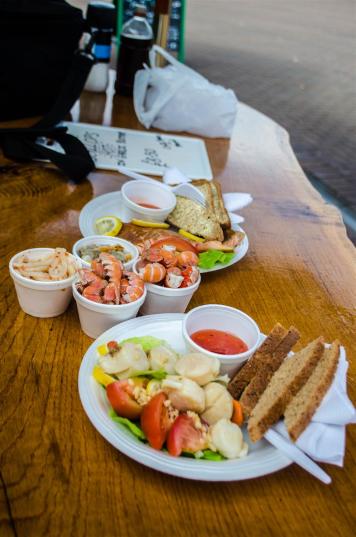 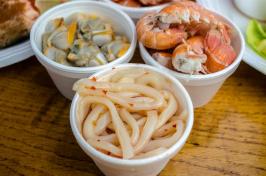 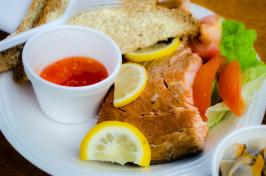 On the second day, when we still felt like we could never eat seafood again, we went back to the little hut by the harbourfront and…we did it again! This time, it was a Sunday brunch to fuel up for our trip to the Isle of Lismore. The meal was a lot more within our budget range but still super fresh and delicious, and here’s what we ordered: squid, cockles, langoustine tails, smoked salmon (a whole block, not just sliced), and the most buttery and garlicy butter garlic scallops. Oh dear, what a dramatic start to the day. I guess some people always has a spare compartment in their stomach for dessert but we have one for seafood, for sure! 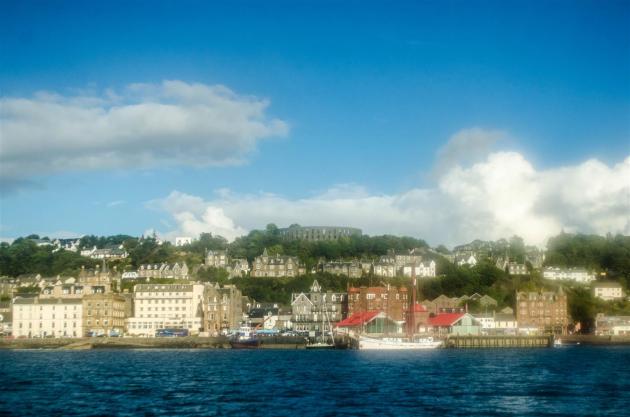 I feel indebted to Oban as I haven’t taken many nice photos of the town even if it has hosted me twice. The only ones I managed to take were from the ferry, this one captured as we were coming back from Lismore and about to reach dock. Again we see McCaig’s Tower high above the town and Ee-Usk restaurant, which is the building with the red roof behind the boat. Oban, let me come back next time for YOU! 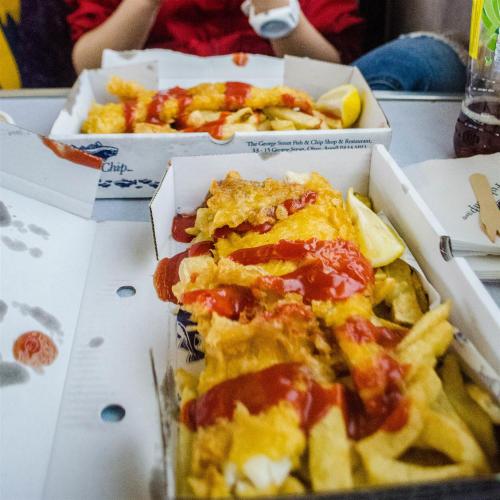 Did it surprise you that I am ending my post with seafood? Yup, even upon leaving Oban, XM and I decided to get some good ol’ fish and chips for the 3-hour train ride back to Glasgow. I guess you can say that fish and chips are a “national” British food, so we couldn’t leave without grabbing some from the seafood capital of Scotland. I hope the other passengers who were in the same coach as us didn’t find it annoying to be in the presence of such awesome-smelling (and tasting, though they could only assume) food that couldn’t be shared with them. Heh, goodbye Oban, see you again someday!