One does not simply visit Belfast without stopping by Giant’s Causeway. In fact I’ll say that my primary motivation for going to Northern Ireland in the first place was to see Giant’s Causeway, all the better with a group of friends. We embarked on a day tour that brought us to the long-awaited Giant’s Causeway, among other attractions nearby including the Carrick-a-Rede rope bridge, and the Dark Hedges.

Waves crashing into the coast

Made up of tens of thousands of basalt columns, Giant’s Causeway lies on the northeastern coast of Northern Ireland and is by far the most famous attraction of the region. Let me just say this: Giant’s Causeway was impressive!! I’ve seen plenty of photos of Giant’s Causeway, but this is one of those places whose magic must be experienced in person – photos do not even begin to describe how cool it is! As my friends and I joined a tour group to get there, we only had an hour and a half to spend at the causeway, including the time it took for the bus to get from the entrance to the actual causeway (or a 25-minute walk each way). I could easily have spent a whole day there and if I ever revisit, I wouldn’t mind just sitting on one of those columns and staring out into the vast sea and at the crashing waves all day…!

The formation and arrangement of the basalt columns were simply spectacular, and we were amazed at how they were able to form in such organized patterns. The entire place was such an inspiration and a wonderful work of art by Mother Nature. Of course, lovely places such as this get so much attention from travellers that you’d expect many others to go and admire its greatness, but that didn’t undermine the coolness of it all. Definitely worth going to Northern Ireland just to see Giant’s Causeway! 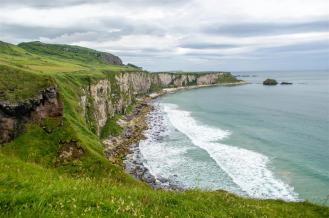 On the way to the rope bridge

The Carrick-a-Rede rope bridge was another stop on the day tour, linking the mainland to a tiny island called Carrickarede. From photos I’ve seen prior to the trip, I thought that the rope bridge would be super long, super shaky, and super scary to cross, but I was wrong! The photos deceived all of us and when we got there, we realized that the rope bridge was in fact quite short, and it took perhaps 10 seconds to cross. Boo, a little disappointing! However, the views on the way to and on the island were quite amazing. The waters beneath the surrounding cliffs were so crystal clear and green, and I even saw a huge cave that reminded me of the Grotto in Tobermory in Canada! 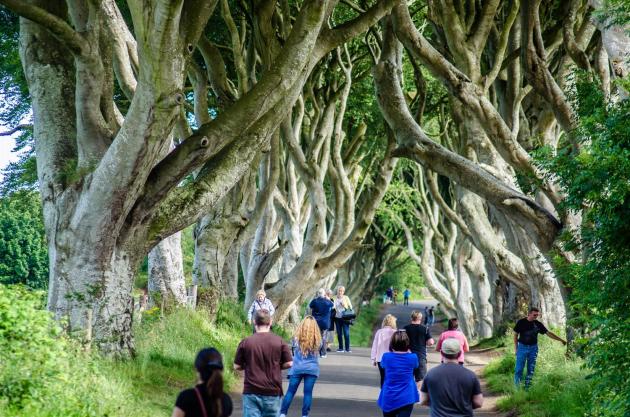 Along the way we stopped by several other places such as Carrickfergus Castle and the Bushmills Whiskey Distillery, but one that would probably interest many Game of Thrones fans (and one of my friends was such a fan) would be the Dark Hedges, which was apparently a filming location for GoT. I have never watched or been interested in GoT, so for me the Dark Hedges was just another cool place to be. And it was indeed pretty cool – I could see how a fantasy series would use such a place as one of its settings. The beech-lined avenue resembled the majestic entrance to a mystic land, perhaps hiding some secrets within the trees themselves and goading visitors to reach beyond the end of the road. I felt bad for the cars that were actually trying to get through though – it was certainly quite tough with all the people stopping there to take photos! 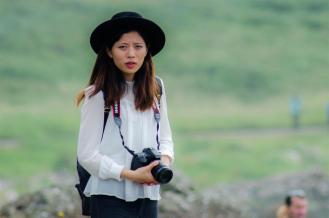 Why does she look nervous?

By the edge of the sea

Smiling in the wind

Beauty by the sea

As with the previous two parts of the Northern Ireland series (read Part 1 about Bangor and Part 2 about Belfast), I end with some photos of my lovely companions, without whom the trip would have been so much less colourful. Northern Ireland was beautiful, but so were you girls! ❤