Chinese food and Chatime in Manchester?!

Earlier this week I was in Manchester for a work collaboration. I stayed two days in the city, mostly spending my time in the lab of my collaborator trying desperately to get preliminary results from a new experiment (which didn’t work, boo). I didn’t get much time to explore the city, but after dinner on the first night, I figured I’d just take a quick stroll around the city centre, even though it was raining. Oh, dear. At least the rain was light and the sky was still bright, so although I didn’t have an umbrella, I didn’t get soaked (unlike that time in Antwerp…) Taking photos in the rain proved to be difficult, but I gave it a try… 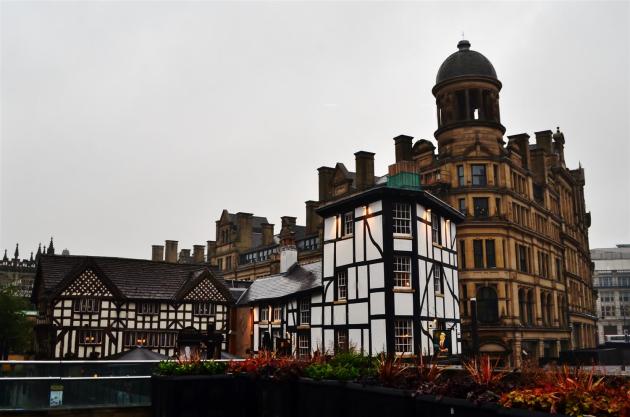 Without an umbrella, I wandered into the centre of Manchester in the rain so that I would at least see a little bit of the city. This part of Manchester, which was close to the cathedral, reminded me of Rennes and Strasbourg in France. I would have never thought that this was a place in England if I only saw its photo. 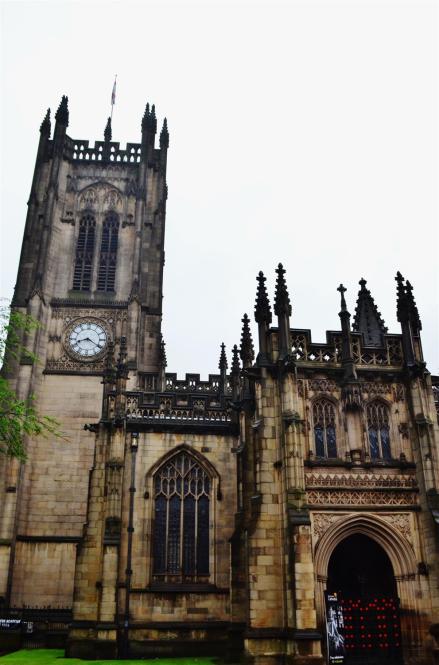 The Manchester Cathedral is said to be the widest cathedral in England. Sure can’t tell from the angle, but of course the cathedral itself spans horizontally to the right so it may indeed merit being the widest. Unfortunately the rain made the air feel so dull 😦 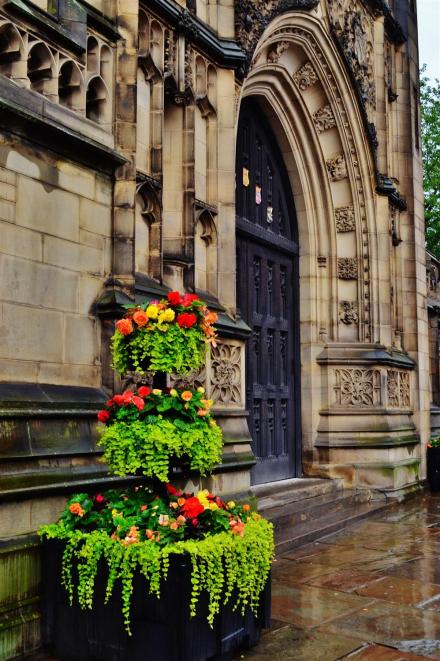 A little bit of colour added some cheer to the city and was especially appreciated when everything in the surroundings felt so grey in comparison. 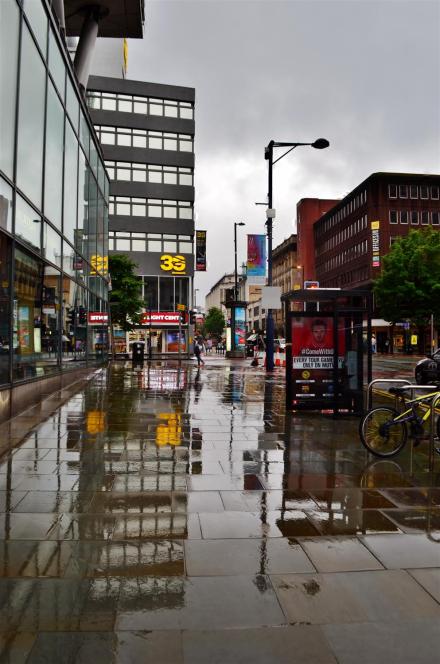 Manchester is the second city in England that I’ve visited, after London. And the only thing I knew about Manchester, if anything at all, was Manchester United. The city itself could be considered a medium-large metropolis, exhibiting a very commercial aura. It didn’t appeal to me as much as say, Edinburgh, but my preference for small cities over large ones probably had a lot to do with it. 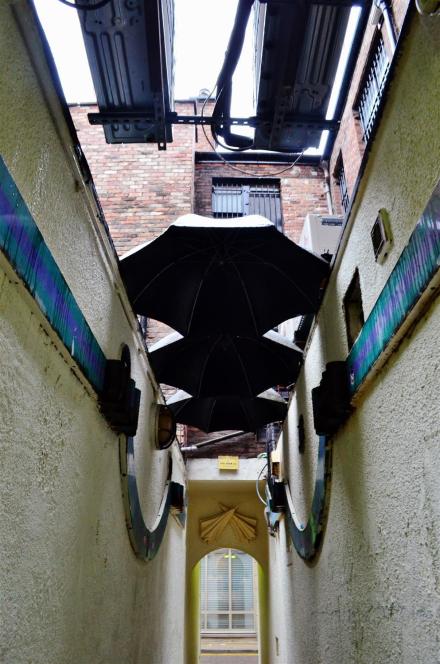 I walked through a narrow alleyway and noticed these umbrella-like objects covering the top of the pathway. I found it quite amusing and wondered whether this served an actual purpose or was more of a decoration. Hmm, could it be that it rains even more in Manchester than it does in Glasgow? 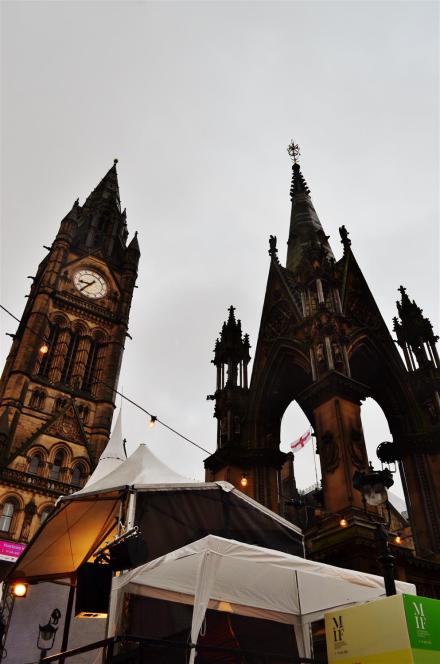 In Scotland, I’m used to seeing the white X on the blue background on the Scottish flag. You’re sure never going to find the red cross in Scotland, but in Manchester, here it was flying in the wind next to the city hall. 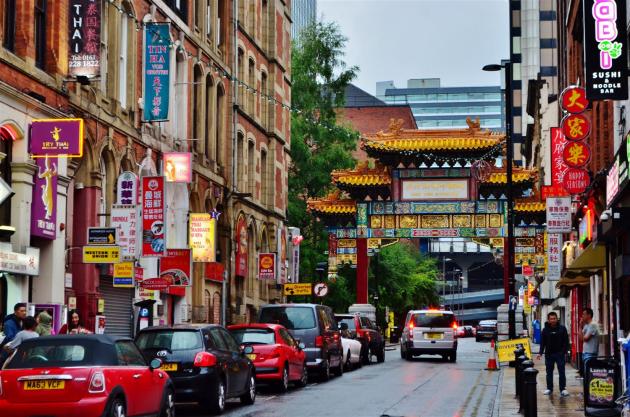 And here was the best part of Manchester…Chinatown! Being a visitor at the University of Manchester meant that I was quite close to Chinatown. Having lived in Toronto for so many years, Chinatown never appealed to me much because I felt like Scarborough was a Chinatown in its own right. However, in foreign lands, any sign of the homeland makes me excited. And I was told that Chinese food in Manchester is awesome…hmmm! 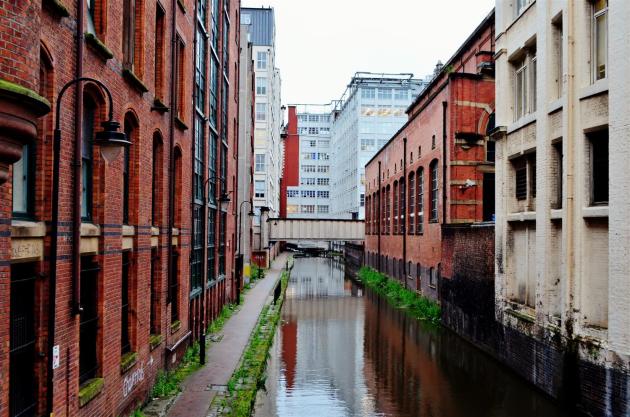 This part of Manchester looks like a simplified and modern Venice. Turn around and the canal runs to the other side, into the Gay Village of Manchester. 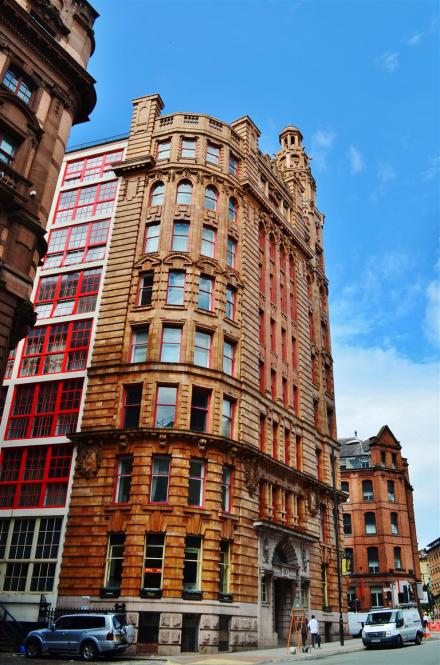 Day two proved to be much more pleasant as the blue sky appeared and brightened up Manchester so much more compared with the previous day! Maybe it was the stark contrast, but the blue seemed bluer than usual and so rejuvenating. Ah, Manchester, you’re not so gloomy after all 😉 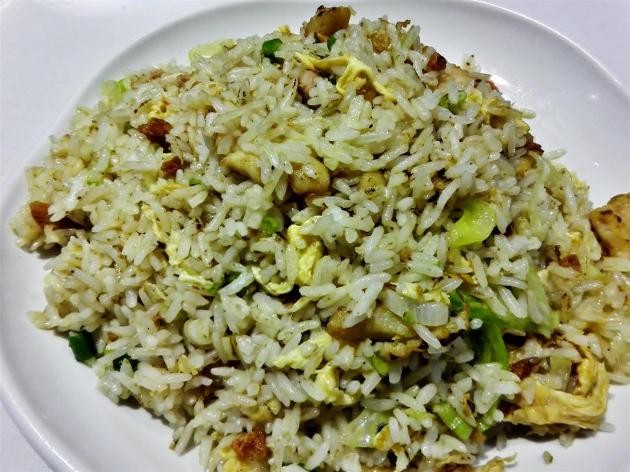 I did mention Chinese food, right? Of course you didn’t think I would leave the city without trying some? On day two, I walked into a random Chinese restaurant in Chinatown for lunch, and ordered a Cantonese classic – fried rice with chicken and salted fish. This was one of my favourite things to order in Toronto, and I wanted to see if Manchester lived up to its reputation. As soon as I put a spoonful of the rice into my mouth, I knew it was authentic. Somehow the infusion of chicken and salted fish just tasted SO GOOD even though it seemed so plain. Sometimes the simplest and most ordinary dishes are the most classic. Manchester certainly didn’t disappoint here! 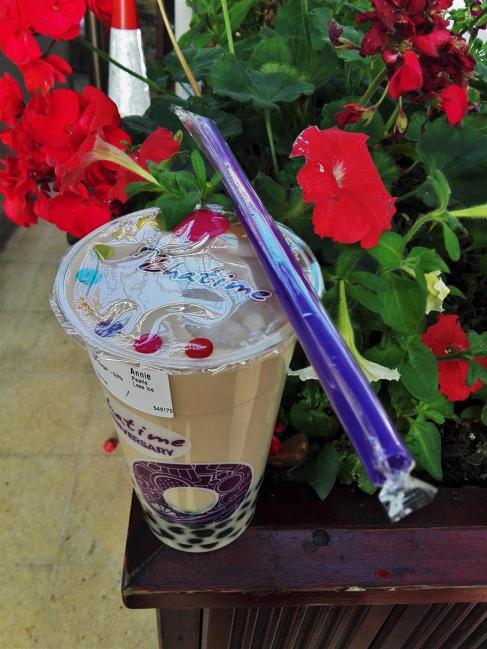 The better surprise came when I noticed CHATIME in Chinatown. WHAT! Chatime became a big thing in Toronto during my absence and I became hooked after going back home last year. They do bubble tea like no other place and the hype is well understood. Well, it’s been 9 months since I’ve had good bubble tea, so it’s certainly time for some roasted Chatime milk tea with tapioca, less ice and 50% sugar, hah! The guy that served the bubble tea was kind of cute and his adorable smile was the last thing that I remembered about Manchester, a perfect souvenir for my departure. In the end I was quite sad that I wouldn’t be coming back to this particular Chatime anytime soon… 😦

5 responses to “Chinese food and Chatime in Manchester?!”