Dreaming of a white Christmas in Český Krumlov

The first time I heard about the city of Český Krumlov in the Czech Republic was, incidentally, through my own blog. A reader posted a comment on my Travel checklist three years ago, suggesting that I add it to my list. And so I did, but didn’t get a chance to travel there until December 2014. A UNESCO World Heritage Site, Český Krumlov is located a little less than 200 km south of Prague, easily reachable by bus. As part of my trip to Eastern Europe, of courrrrrrrrrrrrse there would be no way that I’d miss the perfect opportunity to see Český Krumlov during the Christmas season!

Christmas had already passed when I visited Český Krumlov (I spent last Christmas in Prague), but it’s never too late to hope for some post-Christmas snow, which was absent in Prague. I arrived in Český Krumlov after the first snow of the year (or so said the guide of my walking tour), and I was glad! What’s winter without a bit of snow and freezing temperature to set the mood? 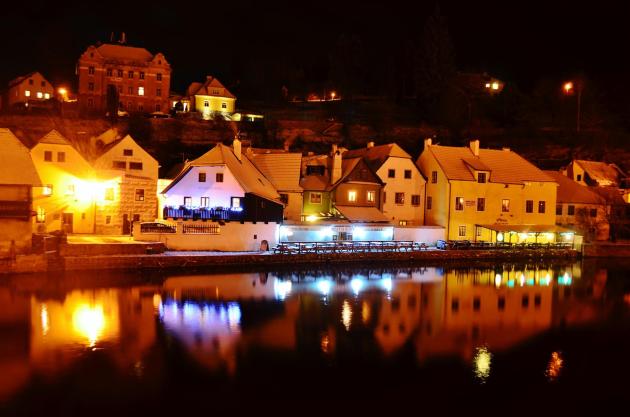 I arrived in Český Krumlov in the late afternoon, when it was already dark outside. Even though I wasn’t able to see the details very clearly, I could already feel that I was falling in love with the town bit by bit as I strolled from the bus stop to the hostel. The winding river Vltava, the same one that traverses Prague, divides Český Krumlov into sections, but the entire town itself could be explored in about two hours. That, of course, would be during the daytime, but I still took my time admiring the lovely reflections of the night lights in the river. 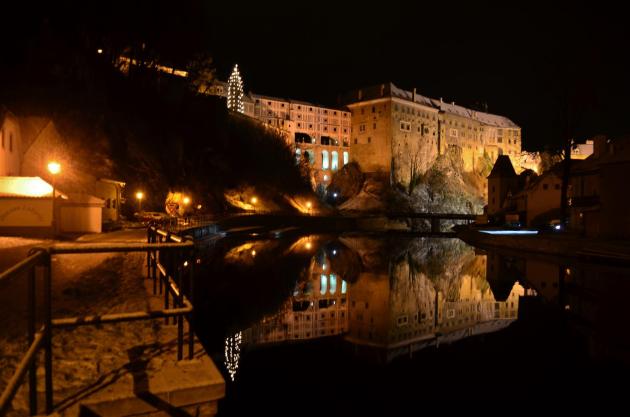 It was cold, maybe around -5 degrees Celsius outside, but the river was calm, posing as a mirror for the castle complex. I continued walking along the Vltava, taking care not to slip on ice and fall into the river, hah! But then I got hungry, so time for some food? 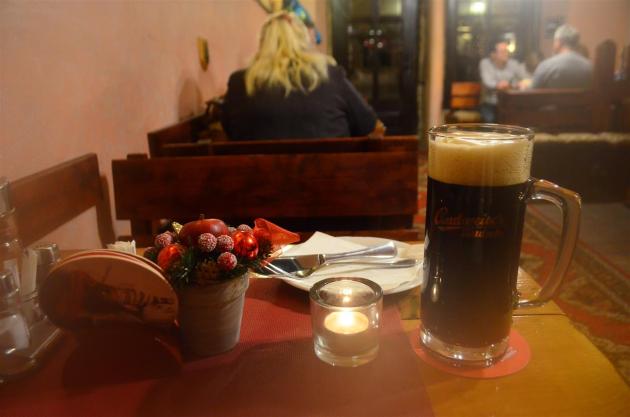 I sat down at a cosy little restaurant for dinner and promptly ordered some beer, because you simply don’t miss out on beer in Czech Republic. The blurry and “dreamy” effect of the photo above isn’t really an effect – it was a result of my camera lens getting foggy after I entered the warm restaurant from the freezing exterior! I do like the way it unexpectedly turned out though 😉 Now, time to wait for the food… 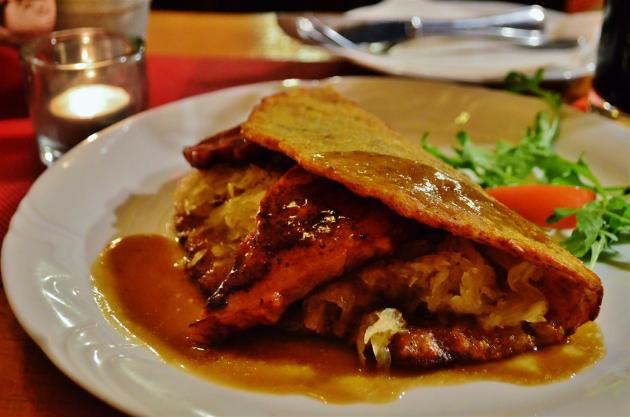 …and here comes what I ordered – the “Krumlov pocket”, which was sauerkraut and smoked meat wrapped in potato pancake, a home-made specialty of the restaurant. The instant I put the potato pancake in my mouth, I fell completely in love with it. It was definitely the highlight of the dish and reminded me of the German reibekuchen, but a thinner version of it – so delicious!

Dinner was followed by another stroll along the riverside, enjoying the snow and solitude that embraced me. While I was crossing a bridge from the castle side to the old town, I saw something that would resemble a scene in a movie. A girl was trying to catch the cold, fleeting flakes that hovered in the air, as each flake melted in her hand before she got a chance to possess it. And the entire scene was illuminated perfectly, putting her in the spotlight. 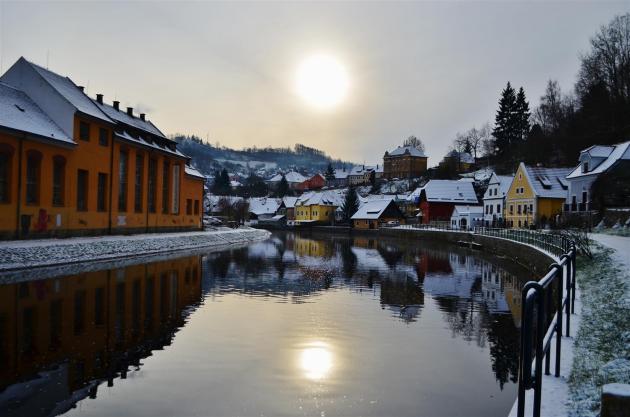 I was glad that I made the decision to stay the night in Český Krumlov, as I was able to enjoy the night (and what a treat it was!) without rushing to get back to Prague on the same day. Of course, that meant that I could wake up the next day and continue with the real exploration of the town, now that I could actually see the streets and my surroundings clearly. Good morning, Český Krumlov!

More reflections in the water. Maybe it’s because it was wintertime, but Český Krumlov has got to be one of the calmest tourist towns I’ve visited. I’m sure this place has a completely different vibe during the summer…!

And yes, what better thing to do than join a free walking tour with a local guide, Jan! In a small place like Český Krumlov, walking through the entire town would take no more than two hours. Surely a local would know the nooks and crannies of his hometown and amuse us with some interesting history and anecdotes, so off we went!

We stopped by one of the best viewpoints of the town, where we were able to see the castle complex (on the left). Ah, snow! It was as if it added a layer of mystery to the city, covering the colours of the roofs that would otherwise have been overwhelmingly beautiful. But I am not saying that the snow is not beautiful – on the contrary, actually! I love snow and so I thought that it was the perfect addition to a dreamy town like Český Krumlov, even though it was still oh-so-cold!

As we walked toward the castle, we passed by a corridor – almost a courtyard – with walls that were painted with bricks, doors, and windows. Yes, each and every one of these bricks were hand-painted. The guide told the story of passing by a row of windows in another part of the city every day for many years of his life. Apparently, one of the windows in the row was actually painted, but it looked SO REAL that he didn’t realize that it was a painting until years later :O

Another wonderful viewpoint, this one slightly higher than the previous one but with an equally amazing view of Český Krumlov. My obsession with viewing cities from high places will never diminish.

I will end this entry with…food??!! Going back to the Old Town at the end of the trip, I was intrigued by the garlic soup in a gigantic BREAD BOWL, sold at the little Christmas market in the town square. As it was super cold outside, I opted for the soup rather than the sausage, which was sold at the same booth. And it was a good choice as the soup warmed me up right away. It kind of reminded me of French onion soup, and the bread bowl really was the highlight. You could try to eat the entire bowl if you’re that ambitious…but that much bread was too much for me!

I would really like to write another entry about Český Krumlov. I liked the town and my trip so much and there are so many more interesting things to share that I feel like one post doesn’t do it justice. To be continued… 😉

One response to “Dreaming of a white Christmas in Český Krumlov”