Paris, the “City of Light”

Leave a comment Posted by Annie Bananie on August 21, 2014

Since I had been blogging about Paris in the previous two posts, I thought I’d throw in this one to end off the “series” – let’s talk about the “City of Light”. Yes, that is a name for our beloved Paris, or…your beloved Paris, for I don’t love it. I’ve done enough “Paris-bashing” in my blog that regular readers should know that I have never been fond of the city, for more reasons than I care to elaborate.

Yet, I don’t deny that Paris is beautiful, glamourous, audacious, dazzling…more so during the night than in the daytime, that is. I feel like Paris undergoes a makeover when it transitions from day to night, transforming from an ordinary, overcrowded tourist destination into an elegant, mysterious lady as she puts on her night gown. And as darkness falls, the city’s secrets unfold as she shows off, not with any modesty, her diamonds and jewels, revealing why she is indeed the “City of Light”.

There is history significance in calling Paris the “City of Light” (or “Lights”) but for me, the reason is simple – Paris gleams in the night with its millions of lights. Just look at this photo of the Champs-Élysées taken on top of L’Arc de Triomphe during Christmas, which till this day remains one of my very favourite travel photos (taken by me). The Ferris wheel at the other end – Place de la Concorde – isn’t always there, and I was lucky that it was there. And the lanes of traffic on the self-proclaimed most beautiful avenue in the world – with the sidewalks lit in blue, the entire scene looks like a national flag stretched out from top to bottom (though interestingly, out of all the tricoloured European flags, none of them are in the order of white, red, and blue, either horizontal or vertical.) 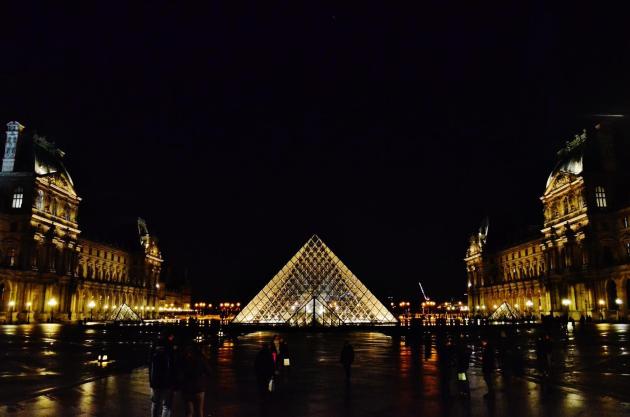 Designed by architect I. M. Pei, the glass pyramids of Louvre are probably one of the most recognized symbols of artistic Paris. During the night, the large, central pyramid lights up like a single crystal, a jewel glistening in the darkness. My dad said that although he loved the museum itself, he felt that the pyramids were a little out of place in front of the Louvre, being such a modern piece of art standing next to something with so much history and age. What do you think?

Paris shines at night, but not only at night. Inside the Louvre, one of the sections showcased the interiors of the apartments of Napoléon Bonaparte, or Napoleon III. Luxurious doesn’t even begin to describe it. The golden furniture adorned with exquisite decorations, the hanging chandeliers reflected in a spotless dining table, and the air of royalty suspended in every detail in every room – that was the life of Napoleon, frozen in time and relived in the Louvre. 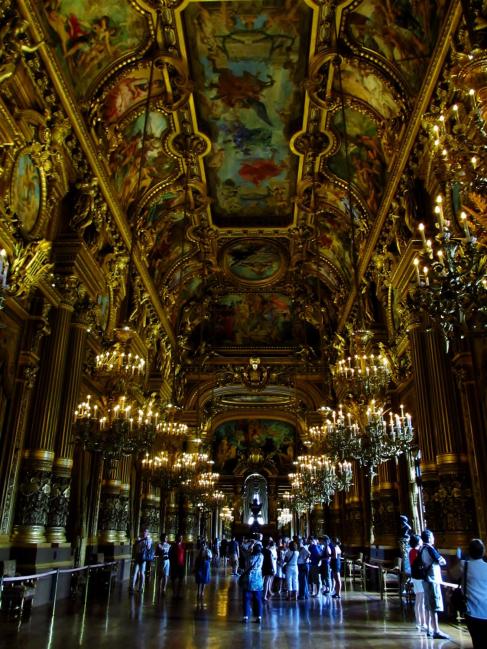 And if that wasn’t enough “bling”, head to the Palais Garnier, or the Paris opera house. Without seeing an actual show, the opera house is a great place to sightsee with its dazzling rooms and hallways. This particular hall is full of large paintings on its ceilings with rows of chandeliers lining the two sides. It’s like walking through the scene of a fancy ball, a fairy tale of some sort.

Back outside, we come to the most representative landmark of Paris – the Eiffel Tower. It was after sunset, the afterglow was fading away, leaving behind a trail of gray clouds to welcome the coming of night. The river Seine flows on silently and obliviously as if not acknowledging the luminosity of the architectural masterpiece. I gotta say the Eiffel Tower is rather dull during the day and that was why I always enjoyed it more during the night, when it becomes fully lit. Isn’t it just lovely?

Of course one photo of the Eiffel Tower is not enough. This one, showing the tower enshrouded in a mysterious mist, was taken at the same time as the first photo, on top of L’Arc de Triomphe. The moment was magical, as the top of the tower disappeared in a thick layer of fog that wrapped around it tightly. Was the fog about to devour the tower? Was it just hiding its face from the crowd because it was shy?

Inside again, les Galeries Lafayette is definitely the embodiment of “light”. At Christmas, a gigantic tree is installed in the centre of the shopping area, reaching waaaaaaaaaay up high. Seven storeys? Eight storeys? I don’t know. The galeries reminded me somewhat of the Grand Theatre in Bordeaux, barely like a shopping mall and more like a performance hall. The ceiling was reminiscent of the night sky with millions of stars scattered about, except these “stars” were the blinding lights that hung from every corner. It was mesmerizing, to say the least.

This photo was taken at 5:30am as I was headed towards the train station for an early train. Paris was asleep, very quiet, very serene, very enjoyable. Not a soul was to be seen on the streets, not a shadow nor a shuffle of movement. But the streets were still illuminated, giving me a sense of security (not always to be taken for granted in Paris) and warmth, even though it was the middle of December.

It is better to light a candle than to curse the dark, although cursing the dark may be the easier and more passive option. We end with the candles in the Notre Dame cathedral, flickering gently no matter how weak they may seem. Even the faintest glimpse of light can chase away the darkness, bringing hope and positivity. Good night, Paris.