Incredible Iceland #3 – So much good food!

The thing about Iceland is that I had such high expectations in everything – and these expectations were exceptionally met – except for its food. Well, that’s not exactly true. More like, I didn’t know what to expect, except for a lot of fish and seafood, maybe. I had taken the time to research about the city of Reykjavik and the natural wonders of Iceland, but I didn’t really pay much attention to the food. It was more of a eat-as-you-go scenario, or so I thought. It seems that Iceland really is a perfect place, as the food was a very pleasant surprise. You go on Tripadvisor or other review sites and every restaurant in Reykjavik has a 3.5/5 rating or higher. So as it turns out, the food was pretty darn good. Add “culinary delight” to the ever-growing list of things I love about Iceland.

The first night I was in Reykjavik, I stopped by a restaurant close to the guesthouse, named 3 Frakkar Hja Ulfari. Apparently the name of the restaurant means either “3 overcoats” or “3 Frenchmen” in English. I sat down and ordered the “Gratineraður Plokkfiskur með rúgbrauði”, or “Hashed fish with black bread “Icelandic specialty””. Icelandic specialty…why not. (I had really contemplated getting the hakarl and was later relieved that I didn’t. The real hakarl experience will be shared in another post.) Don’t be fooled. The yellow blob is not an omelette, but hashed fish covered in some sort of sauce. I couldn’t make out what the sauce was in the hashed fish, so I asked the waitress. She didn’t know either, so she asked the chef, and told me that it was Bearnaise sauce. HUH. That was the strongest Bearnaise sauce I’ve ever had. The one I’ve had before was more on the sour side where as this one was really potent, really…fishy. Or maybe it was just the hashed fish. Good stuff 😛

I was quite full from dinner but there’s always room for dessert, and I’m in Iceland, man! The spirit of “why not” kicks in and I ordered the skyr brulée, which is similar to the French crème brulée – at least that was what it seemed like when the waitress presented me with my dessert. Skyr is a typical Icelandic dairy product, with a texture that is a little richer than yogurt but tastes better! The first spoonful was rather sweet for my taste, but it gradually grew on me and the rich flavours overcame the sweetness. I was pleasantly surprised and delighted 🙂

Dining out in Iceland is expensive. This bowl of traditional Icelandic lamb soup costs 11 Euros (with unlimited refills!) and it would probably be the best (and only) 11-Euro bowl of soup I’d ever have in my entire life. After looking at the spectacular Gullfoss outdoors in the freezing wind, a warm, hearty soup is an irreplaceable refuel with an exceptional home-made taste. It may look very simple, but it was simply amazing. I don’t know how they managed to make it taste so good, and if I had more time, I would have had more than one refill! 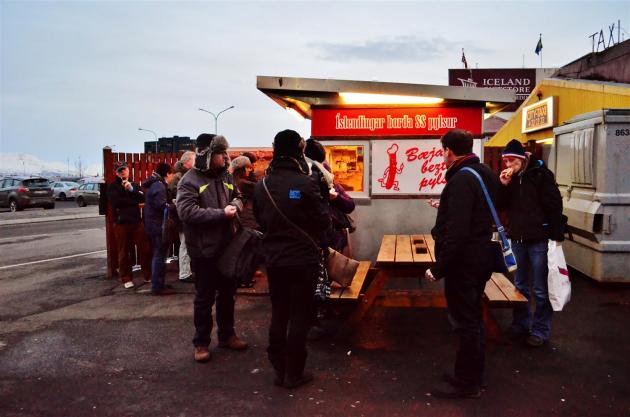 My bus guide told me that the best hot dog in the universe could be found in Reykjavik, just down the street from where the bus terminal is located. The hot dog stand itself is named “Bæjarins Beztu Pylsur”, declaring a little more humbly than the bus guide that it is “The best hot dogs in town”. There is usually a crowd of people lining up for one of the hot dogs, proving its popularity among tourists and locals alike.

Of course I had to try one. I grabbed one and added some fried onions to the bottom and some…sweet mustard, I believe, to cover the hot dog. Boy, the combination of the hot dog, fried onions, and sweet mustard was a perfect one. It might be the best hot dog in Rekjavik (can’t say, I haven’t had any other), but I would hesitate to say that it’s the best in the universe. Sorry, bus guide Erlingur. I’m from Toronto, and OUR STREET MEAT is the best in the universe! Nothing can compare to the hot dogs of downtown Toronto, not even the hot dogs of Reykjavik!

Another little gem recommended by my bus guide was the restarurant Sægreifinn, or “Sea Baron” in English. The restaurant itself was located by the harbour, and I had a really hard time finding it, partly because I expected it to be in a big building with a big sign outside. Turns out the interior of the restaurant is no bigger than a living room of a typical house, with enough seats for approximately 10-15 guests. Super cozy atmosphere and authentic environment – I’m glad I didn’t give up looking for it 😛 There is no menu. The available fresh, raw seafood items are on open display, and you just tell the server what you want and he will make it immediately for you. So many choices…what will I take???

Well let’s start off with some lobster soup, shall we? Apparently this is the Sea Baron’s famous “must-have” item, so I didn’t hesitate ordering it to begin my meal. The soup was creamy and full of flavour. The only thing that would have made it better was if there were more chunks of lobster…heh! 😛

For the main course, I first had the scallop skewer to start. I could have chosen salmon, catfish, cod, trout, and other types of fish, but the scallops caught my eyes. The scallops were well-grilled, so tender and tasty.

And the second main course? Mink whale. I didn’t notice it on display at first, but the guy sitting next to me ordered it and I heard his order. Then I thought…hmmm, why did I not order that? After all I’m in Iceland. Seems like whale is a very common food there, and if I passed on fermented shark, then I’d at least have to try the whale. So I did. The texture was quite hard and chewy, reminiscent of the deer I had in Durbuy. Oh, and it had a very strong, potent smell. Same with the sauce, which was apparently sweet mustard, but definitely different than the one I put on the hot dog. The sauce tastes better than it smells, though, but I think I’ll skip the whale next time and stick to fish 😛

Now for another meal…fish and chips? Yes, with an Icelandic spin. On the menu: fried ling with crispy potatoes and tartar skyronnes. A “skyronne” is a dipping sauce, and I should have guessed from the name that it’s made out of skyr, an Icelandic favourite, similar to yogurt. And the fish…I’m not sure how it could taste so fresh and delicious and NOT overly greasy like typical fried fish. The drink was called “our own fresh soda, made with ginger, lemon, and Stevia topped up with sparkling water”. No idea what “Stevia” actually was, but the drink was definitely a very fresh complement to the fried fish. Awesome!

The final meal in Iceland was Thai food. Apparently there is a big Thai community in Reykjavik, so Thai food is certainly not scarce in the city. On the day I left, I finally visited the little noodle shop nearby my guesthouse. The flashing but not-so-flashy sign has caught my attention before, but I didn’t stop by until a few hours before my flight. Well, it’s now or never. So I stepped in for my first non-Icelandic meal in Iceland. 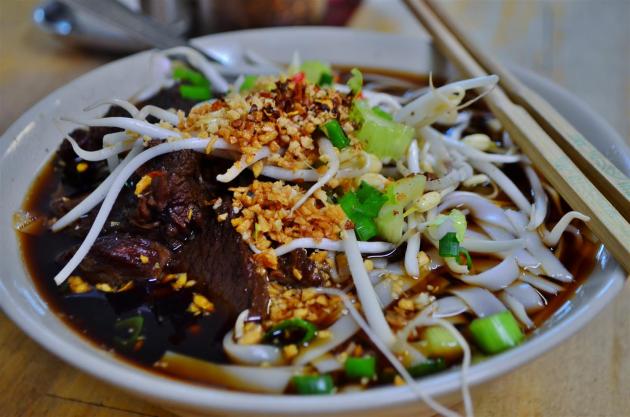 I can’t comment on its authenticity, but this bowl of Thai beef soup noodles was supremely delicious in my humble opinion, with generous chunks of tender, flavourful beef, hot (both in terms of temperature and spiciness), savory soup, topped with fresh bean sprouts, peanut bits, and spring onion. The bowl of noodles were so good that I got a second bowl (with chicken) to prepare for a long flight ahead 😛

That’s all for now, folks, in your Icelandic foodie post. I was actually quite surprised that food would be such a prominent aspect of my trip to Iceland. Of course, that is with my conscious effort to avoid hakarl AKA Icelandic fermented shark. And it is inevitable, I did get it after all, but my experience with it wasn’t in Iceland. That will have to be another post on its own… 😛

8 responses to “Incredible Iceland #3 – So much good food!”