I walked past this card shop and thankfully it was closed as it was a Sunday. Given my obsession with postcards, I almost certainly would have entered and spent a non-negligible amount of money on pretty cards, of which the shop didn’t seem to lack.

One unconventional thing that caught my attention in Schaffhausen, more than it should have, was the variety of the interesting signage hanging above the doors of shops around the city. I soon found myself looking through every street around every corner for the next amusing sign. My favourite ones would have to be the one for a bar (top right, looks like two people having a drink in jail) and the one for a bakery (bottom left).

Oh, oh, oh, a map. I actually had a map of Schaffhausen in my hand, and I was heading for “the round thing”, which is near the top right on the map shown above. Apparently it was called…”Munot”, no idea what that meant but it seemed cool on the map, so I decided that would be my next stop. Oh, look, an arrow points to Munot, exactly what I was looking for! I guess it was time to make a left turn…

…which meant that I had to climb those stairs? Hmm…it seemed like those stairs would lead me into someone’s private backyard or garden or something, but the signs don’t lie…right? OK, here goes, time to climb up who-knows-how-many steps to who-knows-where… 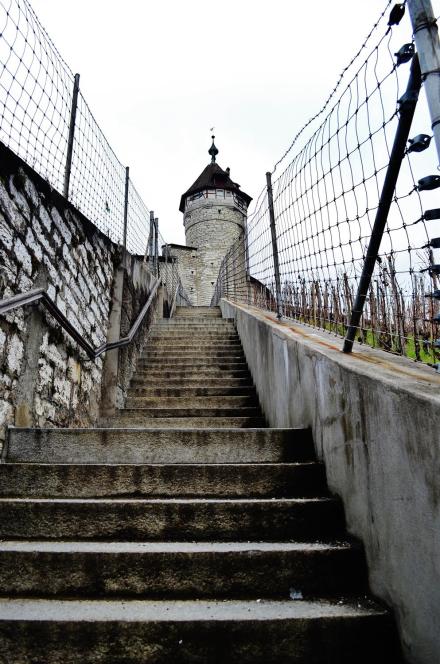 Woah?! A what?! So this wasn’t as simple a climb as I had anticipated, as the steps didn’t seem to end anytime soon. I STILL didn’t know where I was going and what “Munot” actually was. All I knew at that point was that there was a tower in front of me (I had already climbed many, many steps) and vineyards on my left and right sides. I distinctly remember (as I noted down in my journal afterwards) that at this point, I said out loud to myself, “What the hell did I get myself into?” I think it was in a good way though…and the anticipation was definitely rising!

Turn around and you see THIS! Sweeeeeeet! I love viewing cities from high places and this wasn’t even the highest point yet, so the best was yet to come! But hey, vineyards on a hill, above a town by a river, with me ascending further and further, leaving behind the town bit by bit. I am beginning to love this surprise “Munot” search 😀

Tada! Here I am at the top of Munot, which turned out to be the ring-shaped fortress of Schaffhausen. It was nice to take a rest after a long climb. There weren’t many people around, but I imagine that during the summer, when the weather is better, this would be quite a suitable place for a family picnic 😉

Schaffhausen from the top of Munot looked gorgeous. In the 1.5 hours that I was in Schaffhausen, I had explored most of the old town, but it seemed that the city itself covered much more than the streets that I’ve walked. And the Rhine river made Schaffhausen look so beautiful! How I love cities embellished by bodies of water 😀 The skies were smokey gray, but the city didn’t look gloomy because of it. I felt like I could open my arms and embrace Schaffhausen in all its entirety…

The triangular roofs of Schaffhausen line up row on row and as I watched them stretch on and on I thought, “Wow, Schaffhausen, you got me, you totally got me!” Never would I have thought that between my trip to Rhine Falls and my flight from Zurich to Vienna, an unexpected city would pop in my way and surprise me like this. 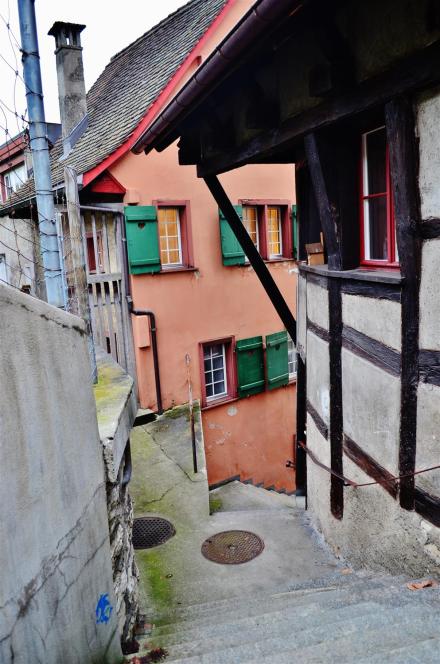 What goes up must come down, and soon it was time to descend those very same steps back into the old town. So in total I spent about 2 hours in Schaffhausen. No glamorous buildings or lights, no world-famous landmarks, not even any blue skies – just a simple walk and a not-so-simple climb to a high place. Nothing was planned beforehand, but sometimes these spontaneous stopovers are the best parts of a long travel period, so worth the time.

One response to “You got me, Schaffhausen!”