One of the things that I love about Louvain-la-Neuve (LLN) – two years ago, thinking that I could ever love Louvain-la-Neuve would be a joke – is the vast amount of interesting wall art that’s scattered around the city. I don’t know if it’s just a LLN thing or a Belgium thing. Maybe it derived from the Belgians’ love of comic books, as I know in Brussels they have huge murals of popular comic strips. In any case, the wall art in LLN definitely adds a certain dimensionality to the city, however small it may be. I just love finding new pieces of art emerging from random corners of a new street or the sight of artists in the process of painting a new wall. It’s really a different and curious type of culture.

Like the previous host city-themed posts (Sculptures of Bordeaux, Streets of Bordeaux, Streets of Louvain-la-Neuve, It’s all about Saint-André, among others), I’ve been collecting images (in my mind) for the “wall art” post. Then one day in November, I had a rare free afternoon to do whatever I wanted. So I took my camera for a stroll around LLN, photographing some of the wall art that I know of around the city. By no means is this a comprehensive collection, but they are the ones I see the most often. Take a look!

This mural of a girl in a field of wild flowers is located right beside the Place des Sciences, close by my lab. It’s a relatively new painting – I think I saw it being painted sometime at the beginning of October this year.

This wall is situated on Rue de Wallons on my way to the lab. There is a (sort of) hole in the wall…or are there two? The “hole” on the right almost seems too real for a cartoon character to just jump out of it… 😉

This stretch of wall art is found in Place des Wallons, right by the student kots (residences). It’s a very surreal jungle of some sort, very bright and colourful. I gotta say I quite enjoy walking by this huge mural to and from work every day.

And this one…is vertical and GIGANTIC! It’s probably something like six-storeys high, impressive work! 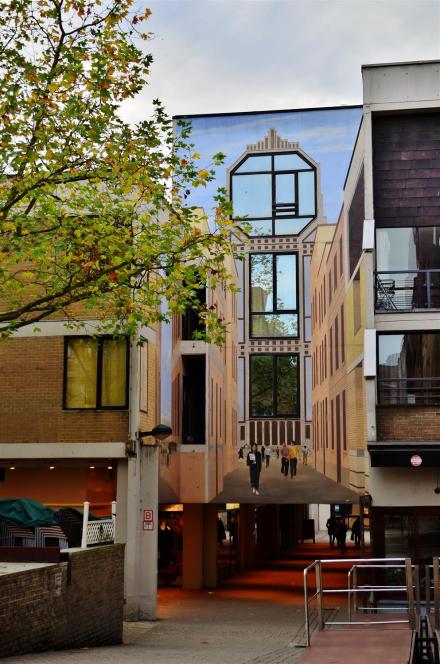 Walk down the Grand Rue towards the lake and before you come to the Grand Place, you see this building with paintings around the windows. Sometimes when the road is crowded with students, the people in the painting seem to blend in with real life…

Here in a random corner near Place Rabelais is a wall that seems placed specifically for the mural. A bit abstract…but colourful.

Beside the Grand Place, the Agora buildings are lined with these extravagant paintings of people in various forms and states, seemingly coming from a fantasy world. Seriously, kudos to the artists who made these works. I can never draw or paint for the life of me so talented artists impress me extraordinarily. 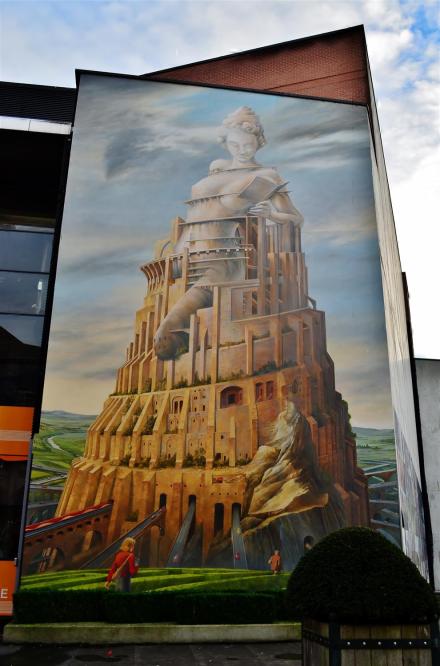 For some reason this huge picture beside the cinema in the Grand Place of a naked lady wrapped in a tower or city of some sort, reading a book, reminds me of the Tower of Babel… 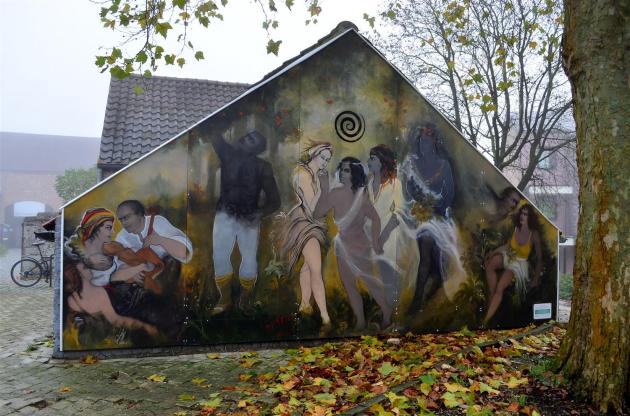 Finally, I noticed this painting of a scenario on the side wall of a house nearby the sports center, accompanied by the finals remains of the fallen leaves of autumn.

Of course, I should really refer to all this in the past tense now, since I’ve left Belgium last week, indefinitely 😦 But to say I “loved” LLN and its wall art? Well, just because I’m not there anymore (and I don’t know when and if I will ever go back) doesn’t mean I don’t love it anymore. In fact, I miss LLN more than I probably should. A post will probably have to be written about how I converted, in two years, from “dislike” to “love”.

2 responses to “Wall art in Louvain-la-Neuve”