Dada and the oldest Dutch city

The trip to Nijmegen (pronounced “nigh-meh-hem”) was successfully carried out. It’s been more than six months since dada’s departure from Bordeaux, embarking on his next journey in his academic endeavors in the Netherlands. Dada, otherwise known as Dr.Das, has courteously agreed to be the city guide for the day as he is now more or less “local”. How nice it is to finally have a reunion!

With more than 2000 years of history, Nijmegen claims to be the oldest city in the Netherlands, although apparently Maastricht also claims the title. Well, my concern wasn’t really to find out which is older; that is quite irrelevant. That is nothing compared to seeing an old friend 😉

Annie and dada (along with Yi-Shiang and his family) had lunch at an all-you-can-eat Japanese restaurant in the Nijmegen city centre. It was my first time having all-you-can-eat Japanese food in Europe, and apparently it was dada’s first time having Japanese food. Oh silly dada, inventing his own way of holding the chopstick every single time he attempts it. When will you learn? 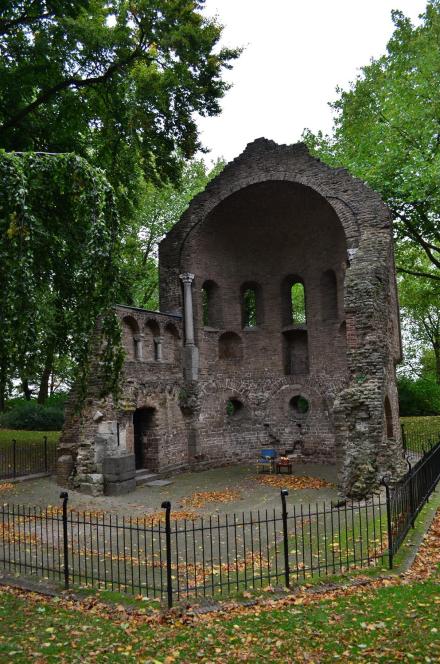 After lunch, the group went to Valkhof park in the city centre for a stroll, which proved very useful for digestion after a very yummy and filling meal. We entered the park and saw this…structure that seemed like it was abandoned by history. No sign, no explanations of what it was and what happened to it…

As for this building, there is a sign explaining its story. “The emperor Frederik Barbarossa built a castle on this hill in 1155. In its construction, material was used from the castle of Charlemagne which stood on this spot. In 1796 the Valkhof was sold by the Province to be used as building material. All that was saved were the two chapels from the castle…” 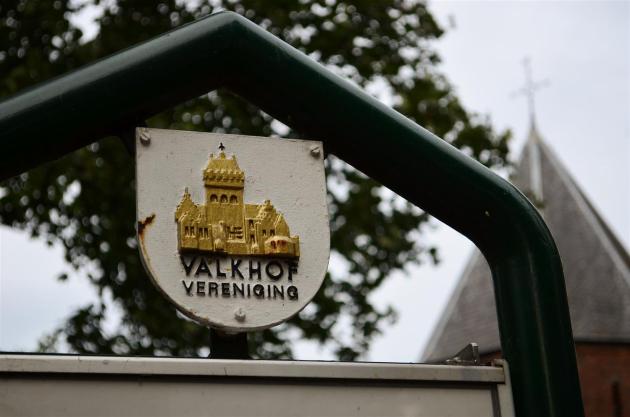 “…The chapel named after Charlemagne is dedicated to St. Nicholas. It was built around 1000 on the pattern of the palace chapel in Aix-la-Chapelle. The present form of the chapel is the result of rebuilding around 1400.” 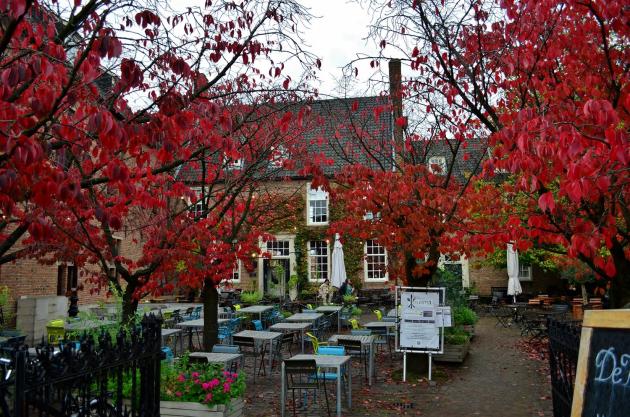 We stopped by de Hemel, a very popular brewery with a wide selection of local beers. I was looking for wine or beer to buy as a present for a friend, and ended up getting a bottle of local liquor in a pretty bottle. The thing that attracted me about de Hemel, however, was the exterior which was surrounded by layers of red leafs. A quiet setting, and quite romantic!

Like many other cities in the Netherlands and Belgium, Nijmegen has its own little Grand Place, or Grote Markt. The cute buildings kind of remind me of a humbler Bruges

By late afternoon, it started to rain, typical of the city, as dada told me. Thankfully it didn’t rain cats and dogs; it was more like…ants and worms? Ugh, should not have made that analogy, it’s disgusting to even think about it. Point is, the rain didn’t interfere too much with our activities, and even made the streets of Nijmegen more charming as they began to light up. 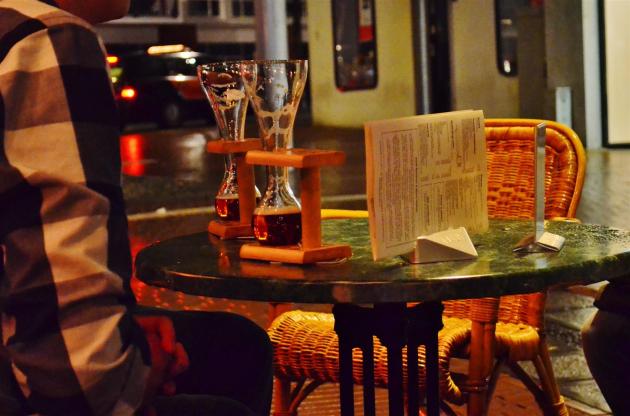 Of course, beer was inevitable. At night, dada and I went to one of the most popular bars in Nijmegen, Samson’s, for a drink. Ugh, too bad they ran out of that Dutch beer we were interested in, so I went for a Paulaner while dada had the classic Guinness. We talked about careers, aspirations, the future, the good ol’ days…and I couldn’t help but notice the awesome shape of the cups that the guys at the table next to us had 😉 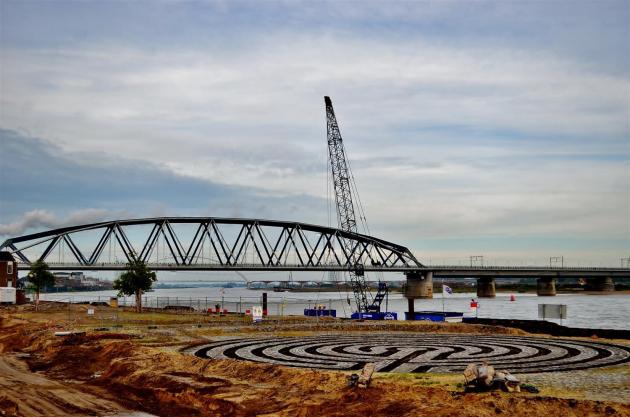 The next morning, I headed towards the quays to see the labyrinth that I wasn’t able to see clearly during the night. Dada and I saw the “labyrinth” label on the city map, and so we checked it out while it was dark. Of course we saw nothing. So THIS was it, quite an interesting structure to put right by the water. Too bad the quays were under construction works. A stroll by the Waal river on a nice day accompanied by a walk in the labyrinth would have surely been wonderful.

I really liked the colours of this row of houses. They seem like four brothers, each with a very different personality. Dark purple big brother is steady and calm, while yellow second brother is outgoing and joyful. Brown third brother is adventurous and restless, and finally, light purple little brother is mischievous and playful. What a funny family…

Kronenburger park was my last stop before leaving Nijmegen, and I finally got a full frontal view of the round tower that we passed by the day before. Frankly, I liked this park more than Valkhof park 🙂

Dada, it had been so great to see you again, and I’m glad you’re still working hard and striving towards your goals. I hope that the next time we meet, you will be one step closer to your ideal career and we’ll definitely have to talk over another beer or two, maybe find that Dutch beer that we missed this time around. Until then, bon courage!

2 responses to “Dada and the oldest Dutch city”