This will be a brief entry on the final weekend travel destination before accomplishing my mission in Belgium for 2012, which was Maastricht in the Netherlands.

On a map, Maastricht is nested in a small part in the extreme south of the Netherlands that sticks out between Belgium and Germany. In fact, Maastricht is the southernmost city in the Netherlands. It is practically right across the border from Belgium, easily reachable from Liège by train or bus.

The skies were gray and the air was sombre when I reached Maastricht, but the absence of rain meant that it would probably be much more pleasant than the trip to rainy Antwerp. Actually, there were some little surprises too… 😉

The train station at Maastricht resembled a huge cathedral. Upon exiting the platform, I was immediately surrounded by stained glass on all sides and I wondered if I was really in a train station at all. Maybe the building was indeed a cathedral before it became a station?

When the day seemed to be enshrouded by shades of black and white, a tint of colour (hope?) was observed in the distance as a hot air balloon hovered slowly through Maastricht. Hmm, those are the colours of the Dutch flag, no? 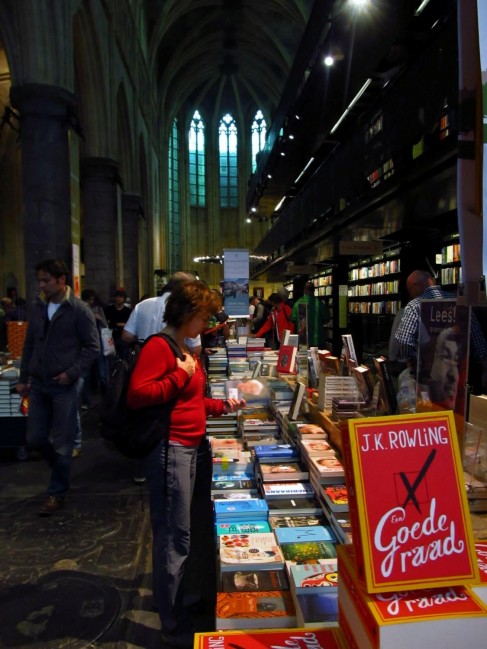 Here’s another cathedral-transformed establishment. If you were on the exterior of this building, you would think it is just another old church, but step inside and you enter the world of Selexyz dominicanen, a large bookstore with an elaborate selection. Imagine book-shopping in such an atmosphere 😉 This would be heaven for me…if only the books were in English! 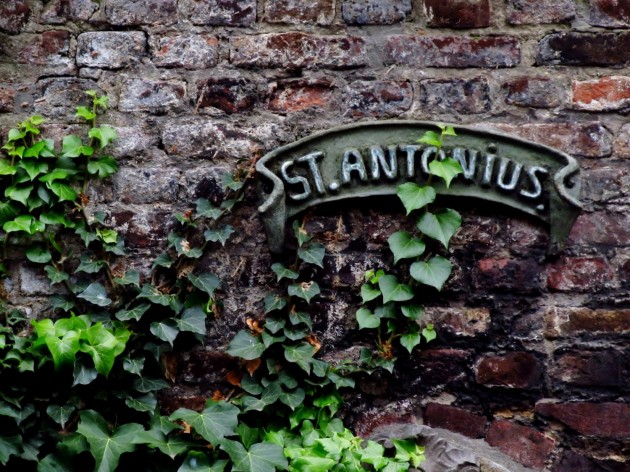 …to find a “one-man swing” (written on the swing itself) hidden in a quiet residential area. I sat on it and swung back and forth for five minutes or so, soaking myself in the moment, surrounded by a sense of insurmountable calmness.

Alas, here comes the surprise! I began loitering around the streets until I heard a loud sound, somewhat bold and rhythmic. It resembled a marching band, but it was more…groovy. I followed my ears and…lo-and-behold, it was a samba band! I joined the crowd to see what was going on, apparently a parade of some sort. Ooo, fun fun!

It turns out that the parade was part of the wedding arrangements of this cute couple. The bride, the groom, and the wedding party danced through the city of Maastricht, accompanied by the Segura samba band, from the city centre down to the Meuse riverside. What a cheerful and energetic wedding! 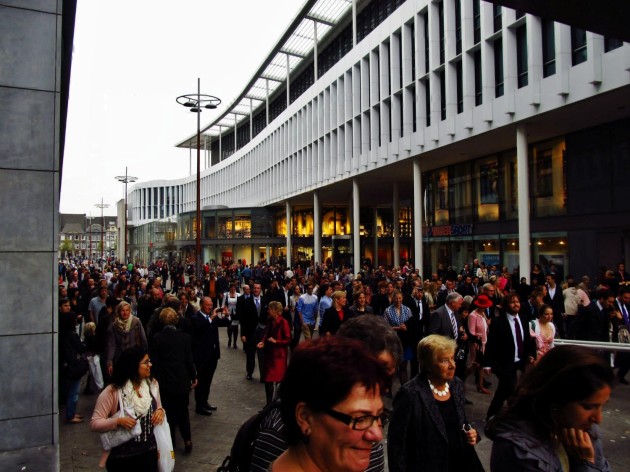 And of course, the passers-by, locals and tourists alike, were involved in the celebrations. The group was joined gradually by more and more people as everyone continued to dance and jog to their hearts’ content. 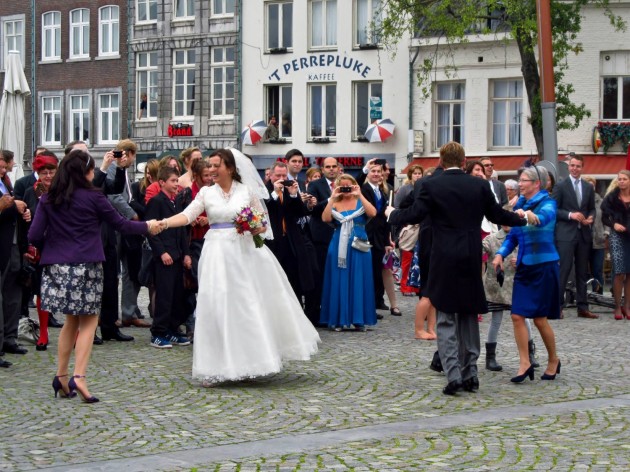 I followed the parade from beginning to end and was so happy that I did, because seeing the smile on the faces of the bride and the groom totally brightened up the otherwise gray day! Participating as an unexpected guest in this lively wedding was definitely the highlight of the trip to Maastricht. Words and photos probably do not fully justify how much fun it had been, so I took videos. Four videos, in fact, so take a look 😉 Congratulations to the newly weds!

9 responses to “Little surprise in Maastricht”