Last but not least, Biarritz! It’s been more than two weeks, but Biarritz will be the concluding post in the Basque Country series.

Training school finished at around noon on a Saturday. While most people either headed back to Bordeaux with the school shuttle buses or left for their flights back to their host universities, a small group of us had some time to spare. Mariel and I would be taking the 18h45 bus in Biarritz to San Sebastián, while Nhi, Naresh, and Ragu had a train to catch in Bayonne at 18h30. That gave us five hours of free time from 13h00, after lunch. Hmm. Mini-Biarritz exploration team, anyone?

Of course, we decided that the little we saw on the bus to the excursion was definitely not enough, and since we had the time, we took a taxi to the Biarritz town centre to walk around a bit until it was time to go. We were joined by Diana, whose flight was at around 17h00 and who would leave Biarritz at 15h00. A cozy group of six, off we went! 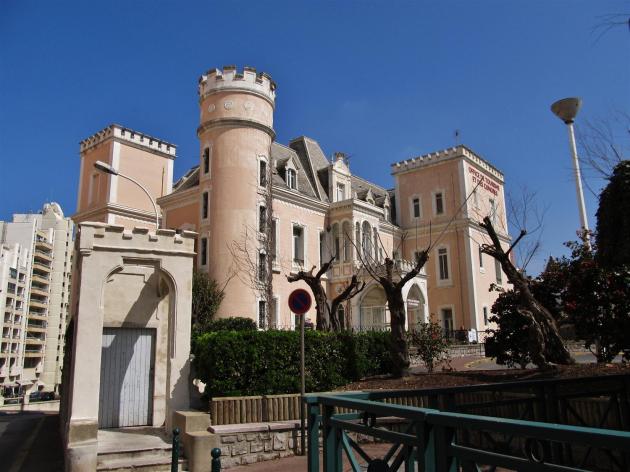 The taxi dropped us off at the Biarritz town centre, and before going anywhere, I needed to head to the tourist information centre to make sure that there was actually a bus later that day that would take Mariel and me to San Sebastián. Biarritz has a very cute tourist information centre – it looks like a noble castle! I would have thought this was a tourist attraction itself, hehe 😉 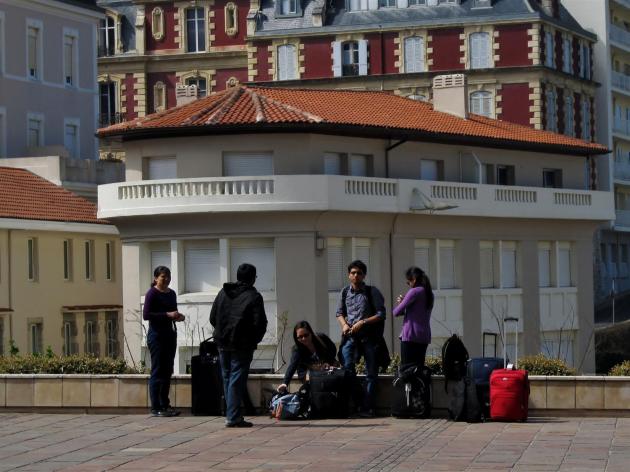 Little tour group, consisting of (left to right) Diana, Ragu, Nhi, Naresh, and Mariel. Plus Annie, of course. We all had our luggages with us as we had just checked out of our hotel in Anglet, roaming around for only a few hours in Biarritz. They were waiting for me to get back from the tourist office, and they look bored. J’arrive!

A look at the path along the coast of Biarritz, ideal for a romantic walk by the sea on a sunny day!

Oh, hello there, lighthouse in Anglet! We were just there a few hours ago, on the other side, of course! A few nights before the visit to Biarritz, some of the IDS group went to the lighthouse for an awesome night view of Biarritz, and now we are here!

Group photo thanks to a Spanish-speaking lady. It was quite windy by the seaside, my hair went flying! Ms.Lighthouse is there again in the back, trying to steal the spotlight (that could be a pun!) Diana, where are your glasses? 😉

Thanks Mariel for taking this pictures of me! Mariel apparently has become my official photographer during IDS week, as she also took a bunch of photos of me during San Sebastián.

People were diving into the water…on a windy day! I guess aside from surfing, diving is also quite popular in Biarritz. It was only the end of March, and I could imagine how cold the water still must have been. Kudos!

After a couple of hours of wandering and sending Diana off to the airport, the five remaining members of the group found a little café in the city centre to sit down, chat, and have a bit of dessert. We ordered a Basque cake and profiteroles (shown above) to share between us. Ice cream profiteroles with chocolate and Chantilly cream, mmmmmmmmmmm!!!

I wonder what it is like, living by the seaside, to be able to see the ocean outside your window and listen to the lullaby of the waves as you fall asleep. Biarritz is a small place, and I couldn’t say that I have “experienced” it in the few hours that I was there, but I liked it. Au revoir, Pays Basque!