Paris and a little bit of Brussels, in one day

No travelling makes Annie a dull girl, so after a month of staying in Louvain-la-Neuve, I went to Paris last Saturday. It’s a place I’ve been to perhaps more than enough times already, almost like my backyard whether I’m in France or Belgium. Now, my friends in Canada hate me when I say that, but I am not trying to boast (trust me, there really isn’t much to boast about Paris). Still, being within a 3-hour train ride from either Bordeaux or Louvain-la-Neuve, Paris became a frequent destination from either city of depart, as a transit point or a place to meet friends.

The purpose of Saturday’s trip was precisely the latter. A friend from Bordeaux is leaving for her internship in China next month, and she happened to be visiting Paris on Saturday. I had booked my tickets to Paris for the same day about a week ago, to see another friend’s art exhibition (which was, actually, the main purpose), so I figured, why not meet up before we say goodbye? I do head back to Bordeaux next Saturday, but there will be a training school in Anglet the week right after, and I will depart on Sunday. By the time I get back, she will be gone 😦 As such we planned our day carefully, first having lunch after my arrival, then heading to the exhibition and finding a place to have a nice chat afterwards.

Even though the city itself has failed to impress me each time I went, I still somehow look forward to every visit to Paris. Of course, I see it not as the most romantic city in the world or the “City of Lights”, but more as a big maze of a place where I can convenient go to get myself lost. And I love that feeling of wandering; Paris is perfect for that.

But as much as I dislike it, I gotta admit that amidst the strange odour in the metro, the dirty sidewalks, and the crowds of people everywhere, Paris is a city filled with music, art, and culture. There are streets where entire rows of galleries and art shops can be found, like a heaven for the true artist. Turn a corner to the next area and you’d find a whole bunch of street musicians performing for an audience that is willing to pause and listen. Such is Paris.

Friends and I were on our way to the art exhibition when we stumbled upon this small strings ensemble playing near the Louvre. Judging by the sound, they certainly didn’t seem like your average amateurs. Seems like you can find a concert anywhere in Paris, even on the metro.

In fact, I had my first “dream Paris” moment on the metro during this trip, when an accordion player hopped onto the train and started playing what sounded like typical French music (similar to this). Well, perhaps that’s what media and generalization had me believe to be traditional French music, but as the train zoomed past the city (it was a part of the metro line that was above ground), I listened to the dancing accordion while glancing out the window at the old French architecture. Then for the first time since I’ve arrived in France, I felt like I was in “Paris in the movies”. So leisurely, slightly romantic, a little dreamy. It was quite an enjoyable moment.

We arrived at the gallery/workshop where my friend’s exhibition was held, still around the Louvre. People who study art truly amaze me sometimes. Art gives rise to such a diverse array of possibilities, boundlessly vast with infinite space for imagination. No restrictions, no limits.

Of course I have to show off my friend’s work (with his permission), since he’s worked so hard for this exhibition. The artist’s mind hides an intricate maze of ideas, conceptions, and thoughts. The canvas may be empty at first, but give it to an artist and wait for an inception of something miraculous. They say that each piece of art conveys a story that touches every person in a different way. Your interpretation of the same painting may be completely different from that of the person next to you, but there is no right or wrong answer. What’s important is that the art truly resonates with one’s heart and soul.

Blue. So blue. Blue is melancholy, yet there seems to be a touch of naivety mixed with irony. Ignorance, agony, indifference, gloat, lack of warmth…am I being a little too negative? In any case, I am so proud of you, my dear friend 😉 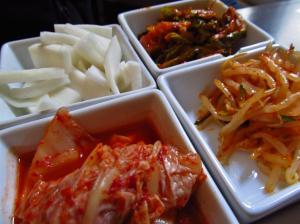 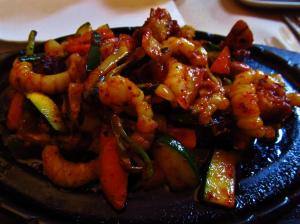 Food! (Yes this part was actually before the exhibition.) We decided to try a Korean place near Dupleix that everyone has been raving about. If it’s that popular, it must be good, right? I gotta say I’m unfair when it comes to evaluating food though. I compare everything to food that I’ve had in Toronto, and we all know that Toronto is certainly not lacking in this aspect, both in taste and variety and especially in terms of Asian food. So, what have we got?

We each ordered a set menu with a starter, a main dish, and a dessert (plus some complementary side dishes). I had the seafood pancake as the starter and disappointingly it was a very small portion, but tasted decent enough. As for the main dish, I ordered the spicy stir-fried squid and half-lean beef. Now, this was a satisfying dish, as I am a lover of both squid and beef. The texture of the squid was well-controlled at the right “chewiness” while the beef was tender and juicy. The spiciness complemented well with the overall taste. Yum yum! I guess to make up for the small portion of the starter, the main dish was quite sizable, which of course made a hungry Annie very happy! 😉

Oh, dessert? It was green tea ice cream, nothing to rave about, but I was sure glad to taste my favourite ice cream again after too long! 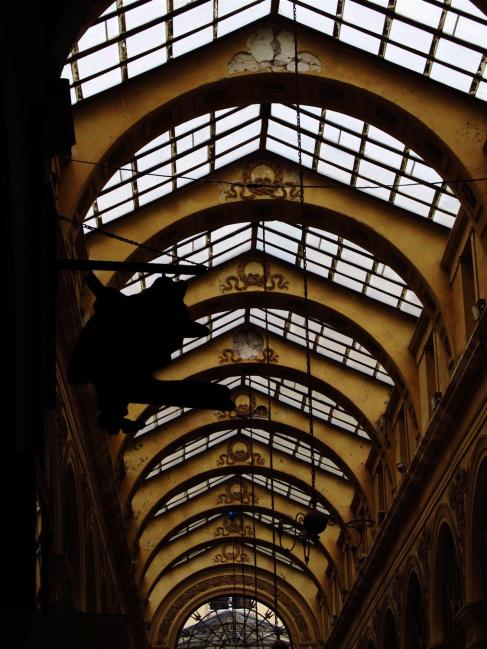 A part of our day was spent wandering around in a shopping centre called Galerie Colbert that we passed by. We weren’t going to enter at first, but after seeing a parade of at least 50 people go in (we assumed that it was a tour group), we decided to blend in and enter, just for the heck of it. The place reminded me of a modest version of Galeries Saint-Hubert in Brussels, which was said to be the first shopping mall in the world. 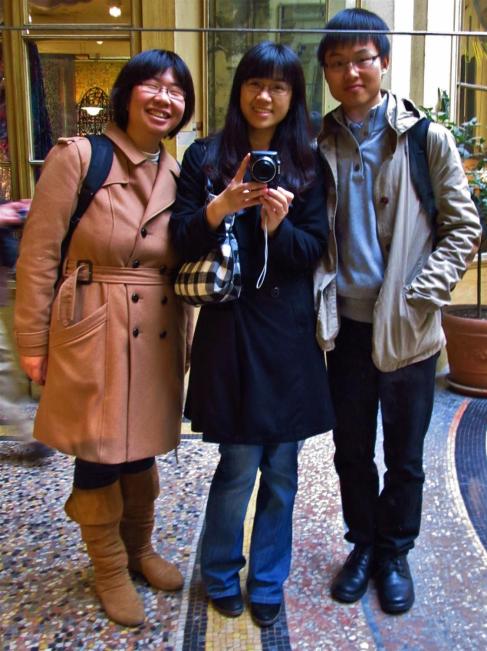 And here is Annie with her soon-to-depart friend and friend’s friend (indeed it was three of us throughout the entire trip). I have my classic “no eyes” expression…seriously, I am the epitome of the small eyes Asian stereotype. And is taking a photo in front of a mirror also an “Asian” thing to do? 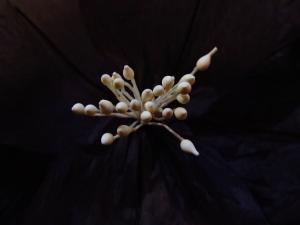 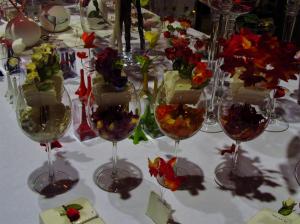 We spent a chunk of time in a shop where they sell flower ornaments and decorations. Of course most of these fall under the category of “cute and classy yet expensive but would be nice to have around the house”, like most of the stuff I saw in Cologne last year.

Soon it was time for me to head to Gare du Nord for my train back to Brussels. Yes, even I found it a little crazy that I actually went ahead with a Paris “day trip”. The Paris metro map is quite colourful, isn’t it? I think Paris has one of the most extensive metro networks in the world. I used to think the Hong Kong metro was complicated enough, but not anymore! And TTC is just pathetic compared to anything…

Hello, Thalys at Gare du Nord. Ah, good ol’ Thalys, taking me right back to Bruxelles-Midi in an hour and 22 minutes, so very convenient. Out of the 6 main train stations in Paris, I’ve been to 3: Gare du Nord (mostly for international trains), Gare St.Lazare (to Normandy), and Gare Montparnasse (to Bordeaux). The other 3 are Gare d’Austerlitz, Gare de Lyon, and Gare de l’Est. Maybe I’ll make it a goal to travel to at least one city from each of the stations before I leave France for good. 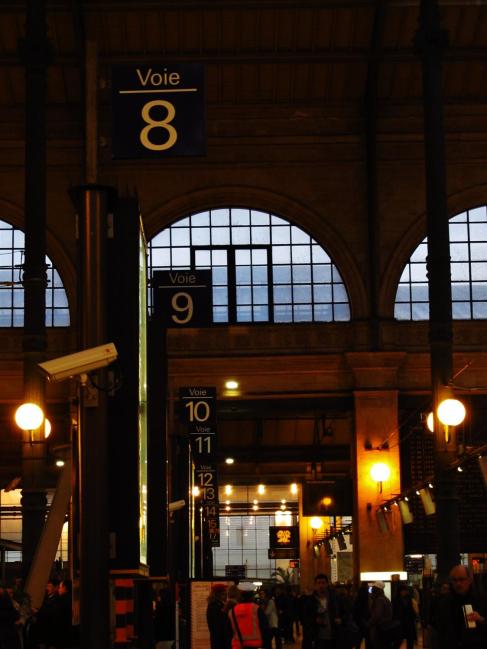 I still feel insecure when I’m wandering around Gare du Nord. In fact, I rarely feel very secure in Paris. Again, I will make an unfair comparison to Toronto. The Paris city centre is probably not too different from downtown Toronto in terms of safety, if you keep some common sense. However, I’ve never felt threatened or unsafe in Toronto, even if I was out quite late. Then again I’ve lived in Toronto for 15 years and will probably permanently call that place “home”, so you see how this is an unfair comparison. Sorry Paris.

Back in Brussels, it was dark but still only 8 o’clock at night. I decided to drop by the Grand Place before I headed back to Louvain-la-Neuve, just to see it lit up at night. I was anticipating this part of the day because I LOVE cities at night, and I had thought that the Grand Place would be stunning after the sun goes down.

Well I was a bit disappointed. Only the town hall was lit up in a ghostly green, which was kinda cool, actually. However, none of the other buildings at the Grand Place were lit up 😦 I still took a stroll around the area though, mainly because I wanted to get some Brussels waffle from Brussels. The authentic thing must taste good! At least that was what I thought.

Disappointment again. You see, I had a plain Brussels waffle in Louvain-la-Neuve and it was probably the best waffle I had ever tasted. Now, any normal person would expect Brussels to have the best Brussels waffle, no? The first one I got was too soft and even slightly soggy. Not satisfied with it, I got another one at a different store (picture above). This one was better than the previous one, but still no match for the one from Louvain-la-Neuve, which was crispy and flaky on the outside, soft and warm on the inside and just so…DELICIOUS! I can’t believe LLN has better Brussels waffle than Brussels, but hey, at least I can get it here conveniently from now on!

Side note: when I was buying the second waffle, a man aged around 50 came up to me and asked me if I wanted some chewing gum. Feeling a bit sketchy, I declined, but he struck up a conversation with me. We chatted for a few minutes, him telling me that he’s a musician and recounting some stories of his performances, asking me whether I’m on vacation and where I’m from. To be honest I liked the old guy, though natural instincts still told me to be careful, so I didn’t talk so much. He seemed like a cheerful guy though, and as I got my second waffle, he waved goodbye with a kind “bonne soirée”. Ah, strangers. Perhaps he was a nice guy after all. I’ll never know. 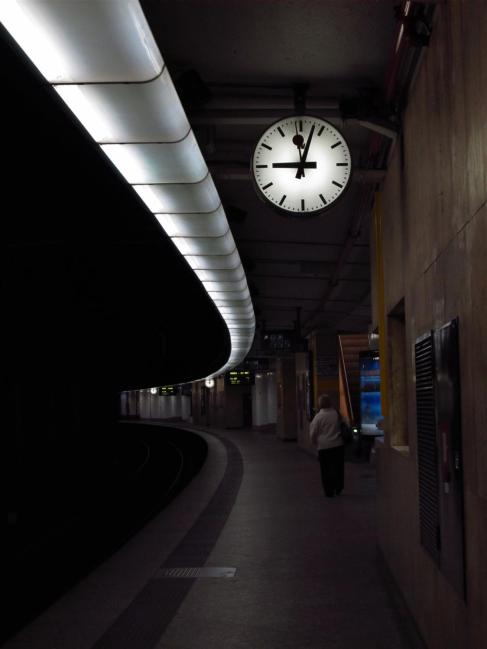 Finally, I headed back to Brussels central station to catch a train back to Louvain-la-Neuve, ending my long day trip to Paris and Brussels. Oh dear, I was so tired by the time I reached the house, but every moment of the day was worth the effort made into making this trip happen. Cheers 😉

10 responses to “Paris and a little bit of Brussels, in one day”