What’s that? Annie went to Ghent and preferred it over Bruges?

Yes, I finally went. I’ve been saying I wanted to go to Ghent for the longest time, yet after two stays in Louvain-la-Neuve, it still escaped me. Most of the time it’s due to laziness that I skip out on trips. I mean, it’s a winter weekend and all you want to do is snuggle in the warmth of your bed in the morning instead of venturing out in the cold! I often give in to the temptation of sleeping in while forgetting that the joys of travelling and wandering are just a tug of an eye away.

And indeed, when you overcome the fatigue and drag your stubborn body out of bed, it only takes about 5 minutes to shake your head awake. Then you get dressed, fling your bag onto your back, leave the door behind for a day, and dive into a whole new world. Then when you see the beauty of the world in front of your eyes, you wonder why you were ever too tired to explore.

Ghent is, as best as I can put it, too beautiful to miss. Most people would want to see Bruges if they even stop by Belgium during their Eurotrips, but boy, Ghent tops Bruges in my book. I wasn’t a fan of Bruges when I visited last April, and truthfully, I don’t think I give Bruges enough credit. Ghent, however, deserves all of my recommendation for those planning to visit Belgium. It is as underrated a city as Belgium is as a country for travel.

I had the same problem with Ghent in terms of its name as I did in Bruges, only this time, it’s even more complicated. (Of course, Ghent is also in Flanders, the Flemish region of Belgium.) You see, Bruges is the same in French and English, and is only spelt “Brugge” and pronounced differently in Flemish. Ghent, being the English spelling, is “Gent” in Flemish and “Gand” in French. I’m actually still unsure about its pronunciation; I believe in English, it’s “gent” with the “g” sounding like “girl”. In French it’s more like “gone” without the ending “n” sound. (I’m no linguistic expert and I probably explained that very poorly…)

Onto the trip: before I visited I did some research to find out what I should see and do, and one of the things that I was determined to do was stay until the sun has gone down, as night in Ghent was supposedly stunning. Arriving in Ghent at around noon, that meant I had about 7 hours to spend in the city, assuming that it gets completely dark by around 18:30 and I take the 19:24 train. Let’s see how that worked out. (Full picture album here.) 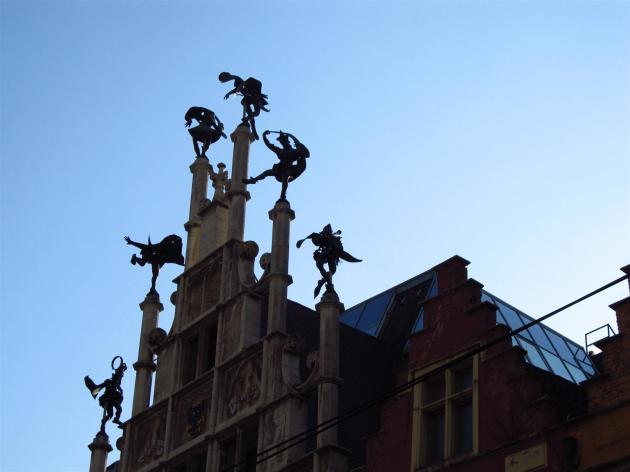 The first thing I noticed when I got off the tram at Korenmarkt (Ghent town centre) were these strange dancing statues on top of a building. I realized afterwards that Ghent is filled with these figures on rooftops all around the city, and that became one of the things I really liked about Ghent.

This angel holding a sword and a shield on a lamppost would be my favourite statue in Ghent. Just look at its badassery, it totally looks ready to strike that light bulb! (Upon closer look it’s probably ready to slay the snake-like figure that it’s standing on…)

The interior of St.Bavo’s Cathedral is amazing. Lots of fine sculptures, including one of Jesus nailed on the cross. It was the first time I could actually say that a cathedral stands out among the countless ones in Europe, as I usually find cathedral interiors one and the same. I could walk around for hours in St.Bavo’s and admire the various works displayed in the many rooms that surround the central area.

The cathedral also houses the altarpiece known as The Adoration of the Mystic Lamb. Though unfortunately I wasn’t allowed to take photos of the paintings, the 4 Euro admission fee to see this work of art was well worth the cost. Recommended!

Aha, it didn’t occur to me that the river would be frozen, oops! No boat ride! (Not that I was planning to go on one…) The Graslei and Korenlei areas in Ghent are THE places to be to stroll and appreciate the elegant façades that fill the city of Ghent. You literally see rows and rows of impressive medieval architecture and the sight is simply magnificent!

I was lucky to catch the good weather this weekend or well, just on Saturday, as it started to snow again on Sunday. Any day with sunshine is an unexpected blessing in Belgium, and what gorgeous sunshine we had on Saturday! Having the sun as the company made wandering and strolling that much more enjoyable, even though it was quite freezing! 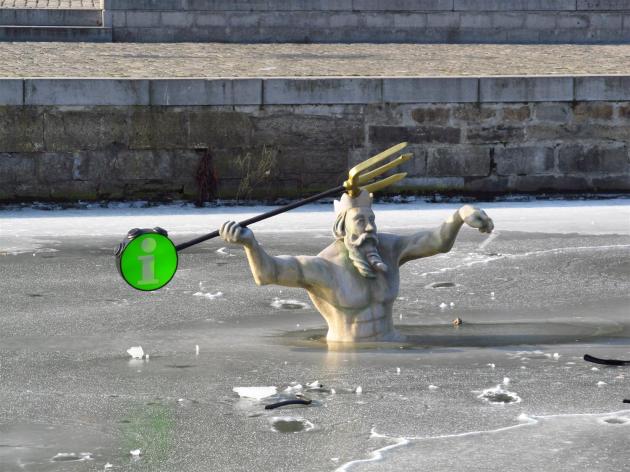 Ohai there, Mr.Sculpture. Taking a dive? Seems like you got a little stuck there. I’m not sure why there is a sculpture in the middle of the frozen river or why he is holding a tourist information centre sign as his trident…all of this is just so amusing.

Up the belfry I went to see Ghent from above. I didn’t really like this belfry experience…perhaps it was because the space was so confined that only one person could traverse the corridor at once on the top floor. I constantly felt like someone would come up behind me and push me…gahh! Anyway, the structure seen here is St.Nicolas’ Church. A part of the city centre is under construction. 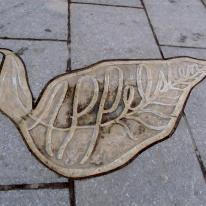 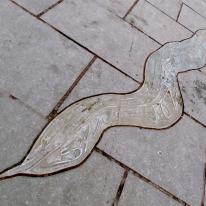 Around sunset I stumbled upon this open area where I saw some rather interesting carvings on the ground. They all seem like leaves of some sort, although for some reason only the maple leaf-shaped one is in 3D…hmm. There seems to be inscriptions inside each “leaf”, written in odd letters. I wasn’t able to decipher any of them…

Night couldn’t have come any sooner! I was actually quite anxious for the sun to set because I didn’t want to miss the 19:24 train, as it would require me to wait for an hour for the next one. Alas, here’s a “night” scene of Ghent…with blue skies! Actually, I like the shiny lights against that deep blue background. It gives “night” a whole new definition. I guess going to Ghent during the winter was a good idea, as I’d probably have to wait till 21:00 to see this if I came during the summer.

And Ghent has a lot of bicycles!!! This was taken right outside the train station, and it’s not at all representative of the massive amount of bikes that I saw! Imagine this being the quarter-circle of the open space that was filled with bicycles…why so many???

So this, ladies and gentlemen, was Ghent. I am very tempted to say that it is now my favourite Belgian city visited, overtaking Dinant…but I’m not sure, NOT TOO SURE. Heh. I haven’t decided where to go next yet. Maastricht and Antwerp are on my “to go and can go immediately” list, but this weekend I might just stay in and rest, maybe catch up on some blogging on past destinations unwritten (i.e. Leuven and Cherbourg). See you next week!

10 responses to “Ghent, the better Bruges”