Germany, the land that holds a prominent place in history…

Germany, the land of Mercedes, BMW, and Volkswagen…

Germany, the land of spargel, eisbein, currywurst, and beer…

The capital of Germany, Berlin, is a place where you wouldn’t want to rush through. A huge city similar to Toronto, one day would definitely be pushing it if I wanted to see all that Berlin has to offer, not to mention I’d get totally lost as it isn’t really a city where you could explore on foot, like Luxembourg or Bruges. Luckily I have a friend in Berlin who was able to show me around last weekend, not an easy task for a city filled with so much history!

What are spargel, eisbein, and currywurst? You’d have to read on to find out!

Even though the city has been reunited in 1989 following the fall of the Berlin Wall, we still referred to parts of the city as part of West Berlin or East Berlin. Perhaps it is still easier for locals to identify landmarks based on the location, and for most, the historical significance of the Berlin Wall is deeply engraved in their minds. After all, the fall of the wall only happened 22 years ago, quite the recent history!

This is a condensed collection of pictures taken in Berlin. For the full gallery, see Facebook. Mouseover the smaller photos for a description of each, and click for full version.

The tour of the city of Berlin started on the west side, with my friend Tin and her boyfriend Robert as the friendly tour guides. Robert was born and raised in Berlin, so he was the perfect source of information about the city and German culture and history itself. Our first stop was at the Reichstag, a building housing the German parliament. 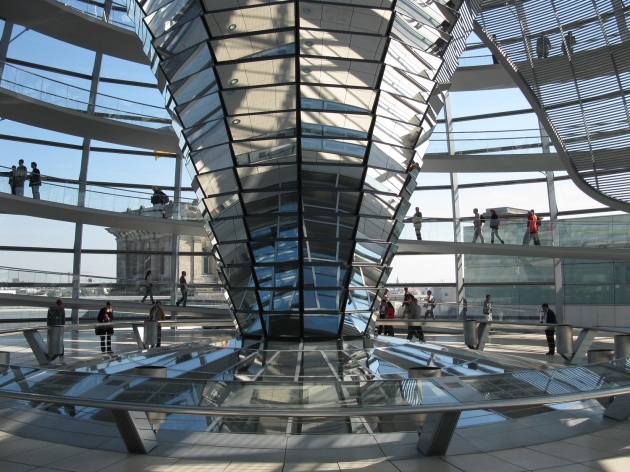 Inside the Reichstag Dome, a large glass dome on top of the Reichstag itself. Below the dome in the parliament, important decisions are made by government officials, and sometimes the parliament is open to the public during certain events. The dome itself houses a gallery of past photos depicting the history of the original Reichstag, its destruction, and its reconstruction over the years.

Annie and Tin on top of the Reichstag Dome! 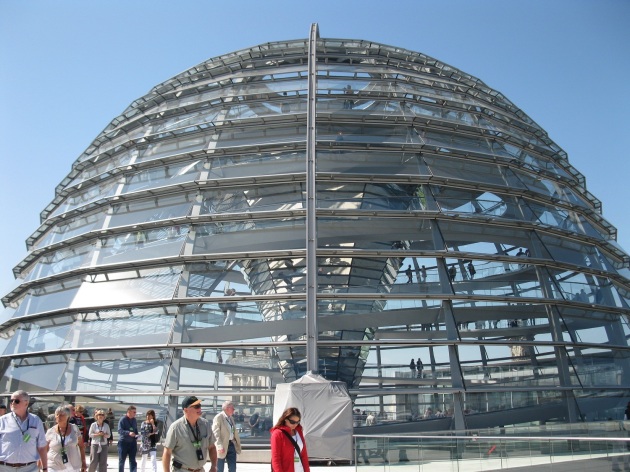 The Reichstag Dome on the outside. According to Robert, the word “Reich” in German is somewhat linked to the Nazis, with a meaning similar to “empire”. Therefore, use of the word is rather sensitive in Germany. “Reichstag” is supposed to mean “parliament”. While the building itself is still called Reichstag, the Germans refer to “parliament” as “Bundestag” and they avoid using the word “Reich” in many contexts. 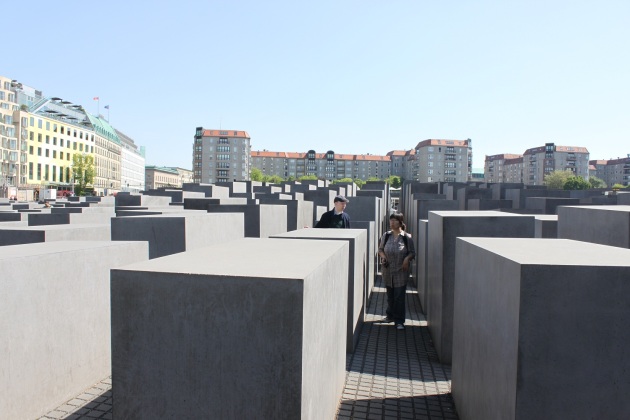 A memorial built to commemorate the Jewish people during World War II. There’s Robert explaining the meaning behind the increasing heights of the blocks. As you start from the outside of the memorial, the blocks are smaller, representing the oppression faced by the Jews at the beginning of the Holocaust, such as losing their jobs. As you venture deeper and deeper, the blocks gradually go taller and you become lost in a maze, unable to see daylight. This represents the later stages of the Holocaust where life becomes progressively more difficult for the Jews until finally, they realize that they are trapped and they cannot escape anymore. One new piece of information: concentration camps were known as “annihilation camps” in German. The Nazis had a twisted mindset that the Jews were going to die anyway, so they “granted them a good death to relief them”. Sad to think about, but the nature of humanity is really something to ponder… 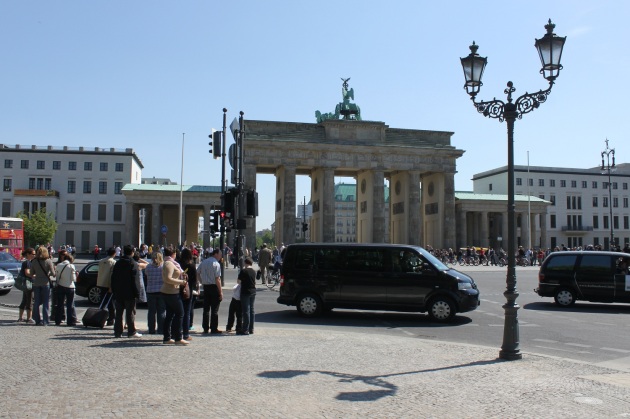 The Brandenburger Gate, perhaps the most important landmark of Berlin and obviously a popular touristic destination. 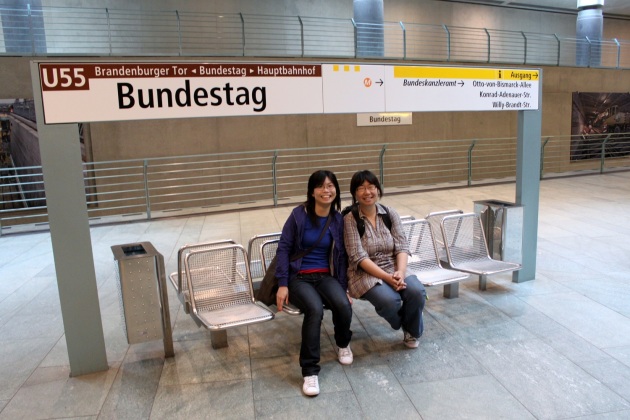 Tin and Annie at Bundestag U-Bahn (metro or subway) station. The main public transit system in Berlin consists of the U-Bahn (subway) and S-Bahn (rapid trains). I would think they’re somewhat analogous to the metro and RER in Paris. Trivia: Some people think that the name of the band U2 is inspired by the U-Bahn line U2 in Berlin.

Somewhere along the way we stumbled upon Legoland. My friend in Canada would definitely love to visit this place! What welcomed us was a gigantic Lego Woody that was taller than me! 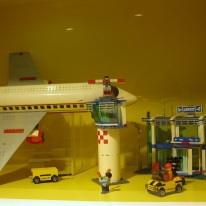 Probably the Easyjet aircraft that I was on. 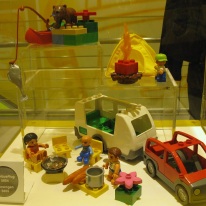 The main focus here is the baguette, clearly.

Missing a piece? Not a problem anymore!

Complete sets built by Lego. I know I can never build anything out of Lego unless maybe with instructions, but these are quite fun to look at. Regarding the last picture, it is a full collection of all the Lego pieces you’d ever need. So colourful! 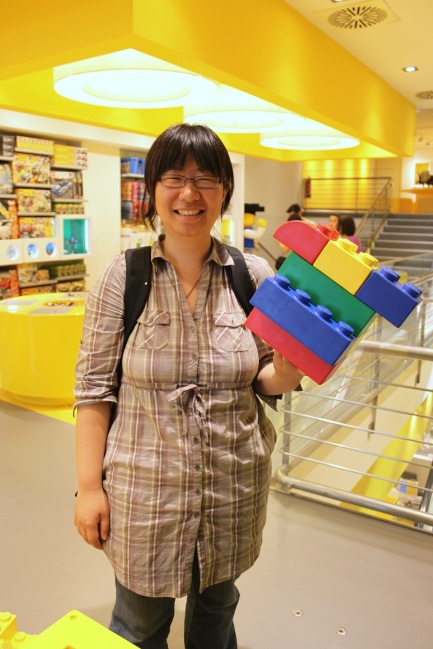 Super-sized Lego pieces for those with BIG ambitions! 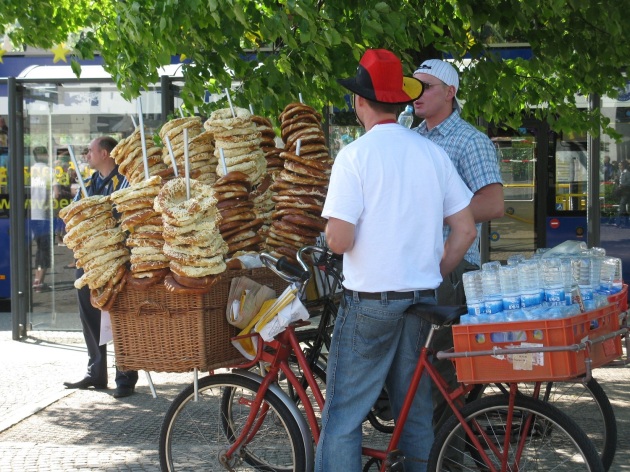 Hmm, I saw these snacks being sold on the street, and they remind me of a combination between pretzels and donuts and some sort of Chinese dough-based snack. Didn’t try one though…

The Berliner Funkturm, or the radio tower. From pictures of previously visited places, you probably realize that I like high places where I can see a city from the top. I’m not sure why not more people were here…they probably all went to the taller and more expensive TV tower. 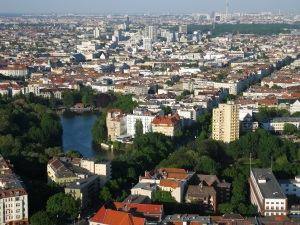 Various views of the city of Berlin from the Funkturm. It was quite windy at the top, but I was glad because minutes ago I was sweating in the sun.

So there’s my first impression of Berlin, from the west side. The highlights of day 1 end here as we move onto…

On day 2 we started out at the East Side Gallery, a remaining section of the Berlin Wall after its fall in 1989. Artists from all around the world were recruited here to paint the wall to depict their ideals of freedom. Some sections of the wall are completely covered in words left by visitors. While I didn’t particularly think that leaving a note on the wall was very respectful to the solemn history, I certainly found some amusing scribbles…

Apparently the most famous painting at the gallery is the one of the two kissing men, named “My God, help me to survive this deadly love”. Most of the paintings on the wall were pretty abstract, some even freaky, and I didn’t understand the meaning behind most of them, especially when the captions, if any, were mostly in German… 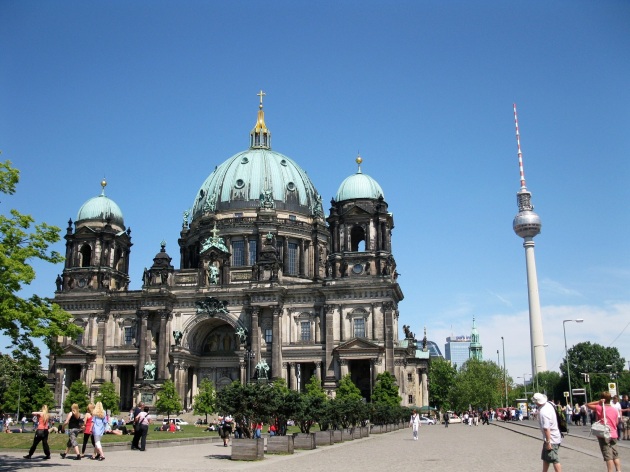 Standing on top of the Französischer Dom (French cathedral), we see the Deutscher Dom (German cathedral) on the other side. The two domes are facing one other and are supposedly replicas of each other.

The Berliner Dom and the TV Tower again, as seen from the French cathedral among the buildings of Berlin.

Wouldn’t you want a world made of chocolate?

Without reference it’s hard to tell how huge these balls are. Let’s say they’re probably the size of your head.

A chocolate shop with statues made of chocolate! This is only a small sample of all the amazing statues in the shop. Although coming from Belgium and knowing that chocolate should be our pride, this shop has turned chocolate into art that you probably would rather keep than eat!

Another short section of the Berlin Wall which remains after the fall. There is an exhibition showing the historical details of the Holocaust, from Hitler’s rise to power to his death to the end of World War II. Lots of heartbreaking stories along the wall, but a great lesson learned from the city that once played such an important role in the fate of the world.

And finally, the world’s largest captive balloon can be found in Berlin! 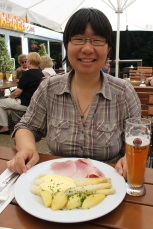 Typical German meal featuring spargel, or white asparagus. We were just in time for asparagus season! 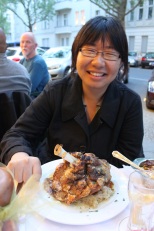 I almost blanked out when I saw this beast…where do you even HAVE gigantic pigs like this?! 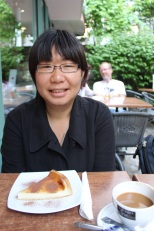 The experience is complete with the most authentic currywurst in Berlin!

And of course you’ve been waiting for the food, haven’t you? Let’s spend a little more time describing each of these delicious meals. If I’ve lost any weight in Belgium, I probably gained it all back in Berlin.

Photo 1 – A standard German lunch featuring ham, potatoes, and white asparagus – also known as spargel – with Hollandaise sauce. Of course, a beer was warranted. I wasn’t aware that asparagus was popular in Germany, and my German friend promptly informed me that we were right in the midst of asparagus season, so it was perfect timing for good asparagus. The combination with Hollandaise sauce was certainly very interesting. For Germans, though, lunch is the main meal, so they generally eat a large, hot meal while for dinner, a snack or a small portion often suffices.

Photo 2 – Another famous German dish, the crispy eisbein – or pork knucle – with sauerkraut and fried potatoes. JUST LOOK AT THE SIZE OF THAT THING! All three of us freaked out when we saw it. I knew German portions were huge but I didn’t think it’d be THAT huge. After having pork neck in Luxembourg (and thinking THAT was already huge), this was overkill. I’d say the size of the knuckle was at least three times the size of my fist…GOSU! Well, I admit defeat. It was an honourable battle with the pig, but I wasn’t crazy enough to finish it. Still, it was oh-so-delicious!

Photo 3 – Traditional German cheesecake! I had wanted to try making on before but lacked the main ingredient, quark cheese, so I was enthusiastic to try the real thing in Germany. Truth is, I had a slice from a bakery as breakfast in the morning and it was pretty much the best cheesecake I’ve had in my life, so I decided that I HAD to try another slice before the end of the day. This one wasn’t bad, but it couldn’t beat the one at the bakery. It was just so…smooth, so savoury, so GOOD! Bakery at Hohenzollerndamm, I will remember you if I ever go back to Berlin!

Photo 4 – Currywurst, German sausage with curry powder and ketchup. The dish was invented in Berlin, and they were sold everywhere in the city, so why would you leave without trying at least one? These ones also came with fries and mayonnaise, and the texture of the mayo was different than any I’ve tried before. It was more like really well whipped egg whites, so fluffy…sounds strange, I know. Anyway, the currywurst itself was amazing. Now I’m tempted to plan a trip to Munich during Oktoberfest…

There. I’m not surprised I wrote so much about the German food compared to everything else. That was probably the best part of my trip.

Overall impression of Berlin: large city to explore with many bits and pieces scattered all over the place, requiring some time to absorb. It is definitely recommended to visit the city without rushing through; two days or more are required, in my opinion, to even begin appreciating Berlin. Thanks to Tin and Robert for the hospitality and Tin for some of the great photos taken throughout the entire trip!

Back in Louvain-la-Neuve, I have so much work to do before my return to Bordeaux in 3 weeks that I don’t have time to breathe. Still, I am keeping up with the travelling challenge. The price to pay for travelling is indeed fatigue, but as long as it is a satisfying fatigue and work is not stressing me out too much (I do enjoy my work), then it is a price I am willing to pay.