If you haven’t read part I about Sesimbra yet, read it here.

Portugal has held a special place in my heart for a very long time, because one of the most influential teachers in my life was a Portuguese man. In grades 7 and 8, Mr. DaSilva taught extended French. He was a silly man, always telling corny jokes and life stories in class, yet for some reason I just liked him. I can honestly say that he played a big part in getting me here today. He inspired me greatly during those two short years, when I was still a youngster, and he encouraged me to continue my French studies. I’m glad I did, because knowing French certainly contributes to my survival in France – go figure.

That was why I was so excited that the first training school is in Portugal. I had told myself that I would definitely visit Mr. DS’s hometown one day and see the place where the old man came from, and so I did, thanks to IDS-FunMat.

So the schedule said that we had an “excursion” to Lisbon on Thursday. Now, the word “excursion” reminds me of elementary school field trips, and to be quite honest, I think most of us were looking forward most to Thursday for obvious reasons. In fact, I think I had the mentality of a little kid that day, excited to go out with a bunch of friends and curious about the unknown city beyond the visible.

The wheels on the bus went round and round and took us from Sesimbra all the way back to Lisbon, our first point of contact in Portugal. We didn’t know that we’d be getting a Portuguese tour guide, so instead of just sightseeing, the whole trip was a bit of a history lesson for most of us, since I’d imagine that not many were familiar with the country of Portugal. First fact: the Portuguese pronounce their capital city as “Lish-boa”, even though it is written Lisboa. One more thing to remember, if you forget anything else I say: the 1755 Lisbon earthquake defined the history of the city. More on that later.

As before, mouseover the small pictures to read a brief description and click to see the full version. 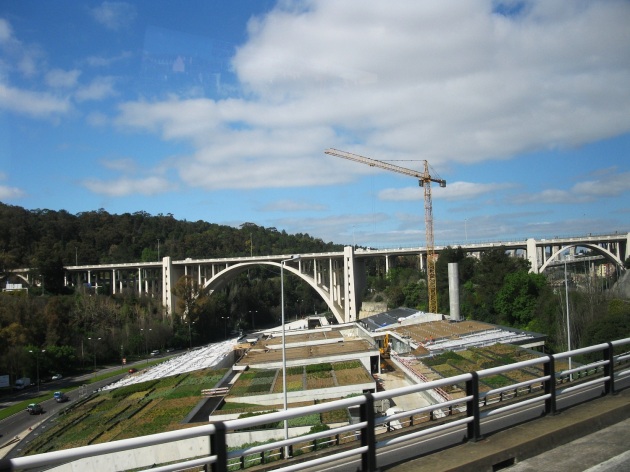 I always find it super annoying that these cranes manage to destroy an entirely beautiful landscape, but without these cranes, the houses and bridges wouldn’t be built. The gigantic crane right outside of our hotel also bothered me. It just seemed so out of place on a peaceful beach… 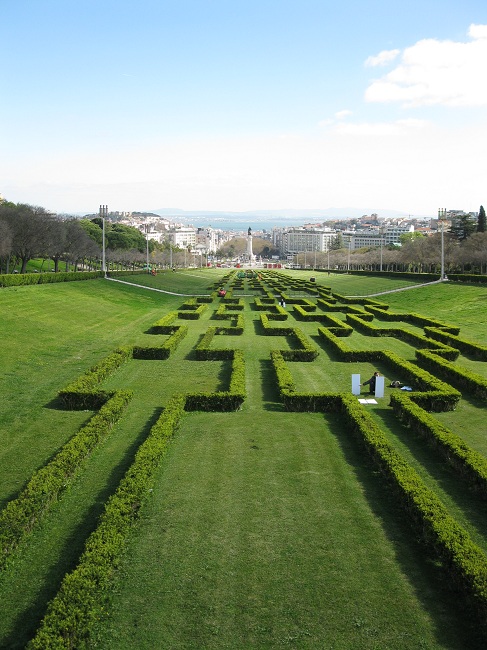 Here is Eduardo VII Park, named after King Edward VII of the UK. Straight ahead, where you see the column and the statue in the distance, would be the Lisbon city center, which we would be visiting in just a bit.

This was one huge flag. I like the Portuguese flag – at least it’s not three stripes like many other European flags.

The phallic symbol apparently represents the military power of Portugal…I didn’t make this up, the tour guide said so!

Me and my obsession with lines of trees again.

Annie and the ladies!

We wandered around the park for a little bit and it got rather windy, as you could tell from my hair. The weather was gorgeous though, and while everyone said it was cold I was thinking, “This is perfect!” 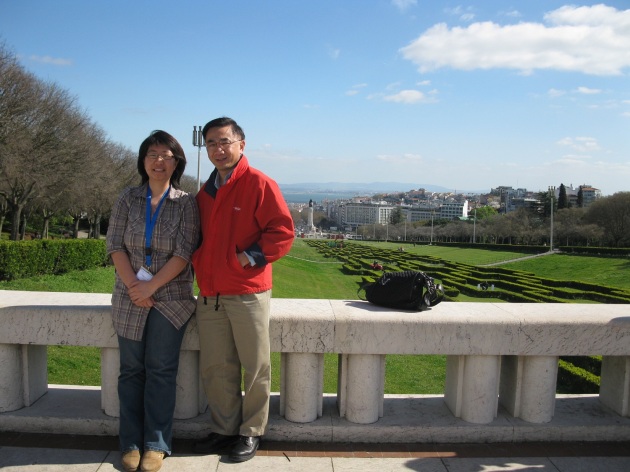 Yes, that would be professor Michael Tam, my macromolecular sciences II professor in 3B. He is part of the IDS-FunMat program, along with my dear French materials professor Eric Prouzet, so I had the chance to meet them last week after at least a year of seeing them. Now the question is, why didn’t I catch a picture with EP? >_> 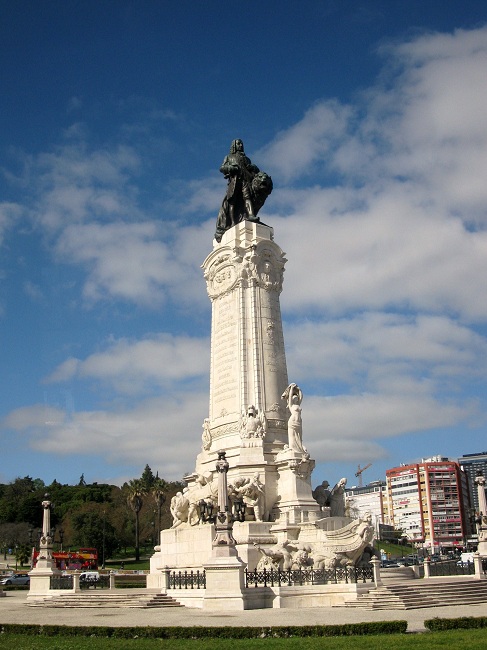 There’s the status of the Marquis of Pombal right in the middle of the Marquess of Pombal Square. Apparently, this guy played a crucial role in a major event in the history of Lisbon known as the 1755 Lisbon earthquake. The earthquake did so much damage to Lisbon that the city has its own timeline: BE (before earthquake) and AE (after earthquake). It was the Marquis of Pombal that initiated the reconstruction efforts and contributed greatly to the rebuilding of the city, making him one of the most important historical figures to the Portuguese. This will not be the last time you hear about the earthquake, keep that in mind. 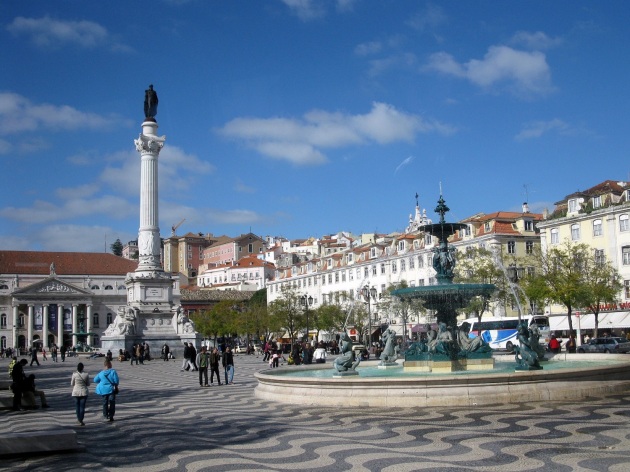 The Marquess of Pombal Square in full view. The design of the ground tiles were meant to mimic the waves of the sea, and as the tour guide commented, you could get seasick just walking by. I find it pretty neat though. 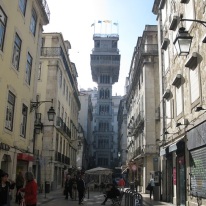 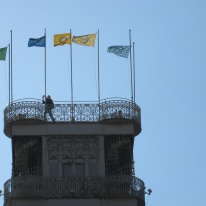 A man on top of the lift, looking down onto the city. 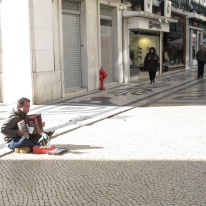 Street performer with a cute dog as its companion. 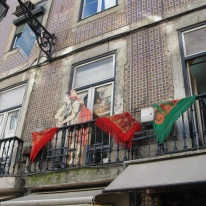 Portuguese styled housing, with interesting ornaments on their balconies. 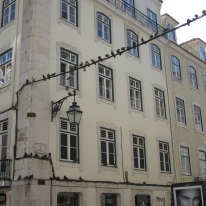 I took this picture only because the birds were perfectly lined up and it once again reminded me of the short animation, For the Birds. 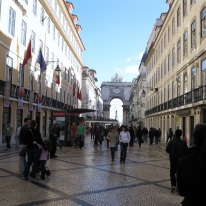 This is Rua Augusta, a major commercial street in Lisbon. It reminds me of our own Rue St. Catherine in Bordeaux, in terms of style and elegance. Of course, this place was completely destroyed by the great earthquake of 1755 and again completely rebuilt thanks to the Marquis of Pombal. 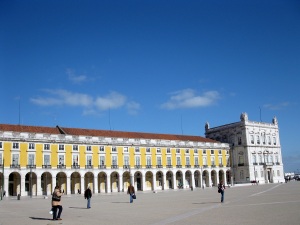 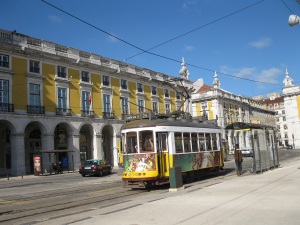 This is the Commerce Square, situated by the Tagus River. The little yellow vehicle is the Lisbon funicular that takes passengers from the lower parts of the city to the higher parts. Quite convenient for a city with lots and lots of steep hills and changes in elevation! 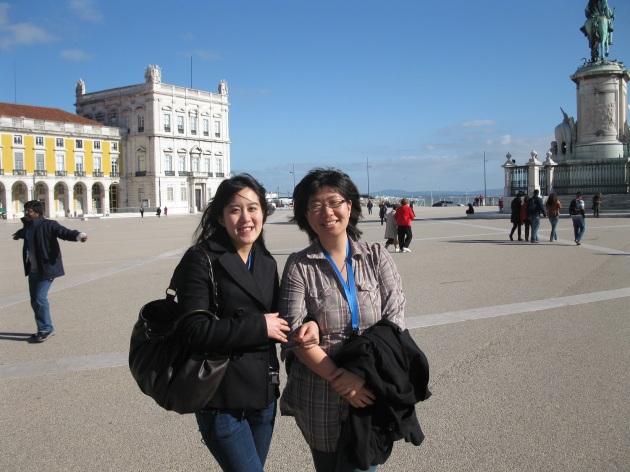 Uyxing and Annie, enjoying the breeze but mostly appreciating the sunlight and the blue skies! 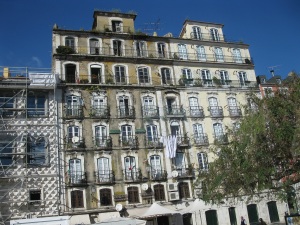 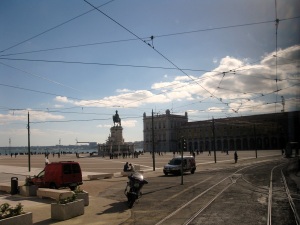 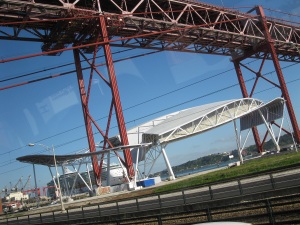 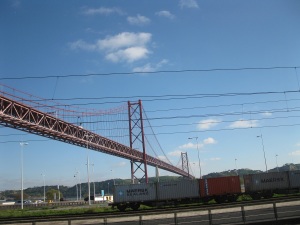 Random snapshots taken on the bus. The red bridge is called the 25th of April Bridge, built to commemorate a revolution that happened in Lisbon on April 25th, 1974. The bridge was designed and built by the same company that built the Golden Gate Bridge in San Francisco – resemblances, anyone? 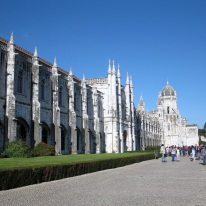 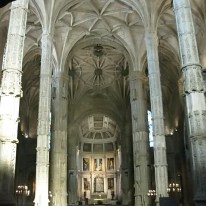 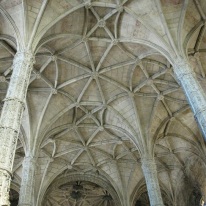 Tilt your head up and you see the ceilings are designed with intertwined ropes and knots. Quite spiffy.

The Jerónimos Monastery was a beast of a piece of architecture. It withstood the earthquake of 1755 and has been designated as a UNESCO World Heritage Site. The interior of the monastery was unique in style in that it represents the Age of Discoveries. Hence, many designs within the monastery were related to elements of the sea, such as ships, ropes, and knots. Inside the monastery were the tombs of two great Portugues men – Vasco da Gama, a Portuguese explorer during the Age of Discoveries, and Luís de Camões, the most famous Portuguese poet. In fact, the Portuguese national day was set on June 10th, commemorating the death of Luís de Camões. 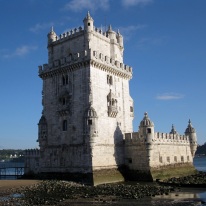 The Belém Tower, situated by the Tagus River. 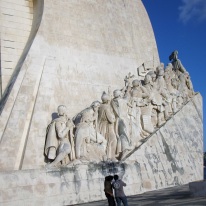 Padrão dos Descobrimentos, an enormous monument to celebrate the Age of Discoveries. 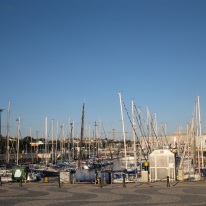 Located in the Belém district, we have the Belém Tower followed by the Padrão dos Descobrimentos (yes I Googled that, there’s no way I would have remembered the name). Both structures symbolize the importance of the Age of Discoveries in Portuguese history. Sitting by the Tagus River, the Belém Tower acted as a defence fortress. I believe it was also a prison at some point in time. As for the Padrão dos Descobrimentos, the entire monument is there to illustrate the epic era known as the Age of Discoveries and the Portuguese people that were part of the ventures. Of course, the boats in the last picture conveniently give us the notion that many men set sail to the unknown during that period of time, right from this point in the Tagus River. 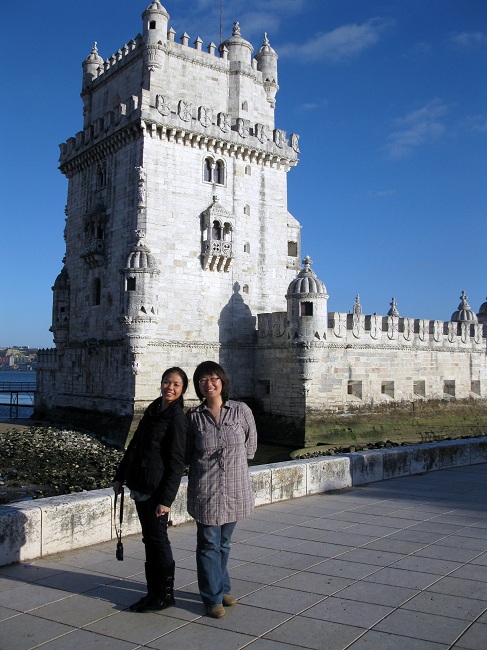 Mariel and Annie in front of the Belém Tower, which was unfortunately the last part of our trip! 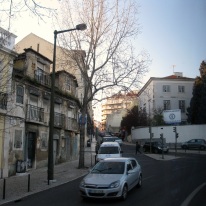 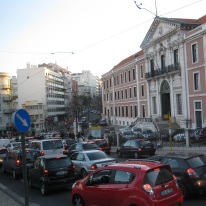 Cars during rush hour. Notice the pink building. The tour guide told us that Portuguese people love pastels, which has been quite apparently throughout the trip. 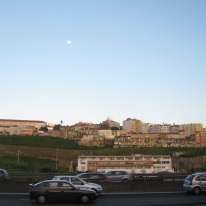 Finally, we had to say goodbye to Lisbon after a short 4-hour tour around the city. I would have loved to see more of the land of hills, preferably at night, because every city transforms at night and it is a completely different atmosphere, mixed with mystery and curiosity. I had to fly back to Brussels immediately after the training school, but had I known that many of my peers would stay for the weekend in Lisbon, I would have, without hesitation, prolonged my stay and explored the city beyond its skin. However, being able to see a new city has been truly a valuable experience for me, and I appreciate and miss Mr. DS even more now, after fulfilling my promise to visit his homeland. Perhaps we shall meet in Madrid next time, my dear old friend?