Plunging back into work

Back in Bordeaux, we’re in our third work week of 2011. According to 680 News, yesterday (Monday) was the most depressing day of the year. I wasn’t all that depressed, but I certainly felt unusually tired for most of the day, to a point where I was almost sure that I’d fall asleep in the lab.

Work as a PhD student was starting to pick up slowly and surely before the winter holidays, but as soon as I returned to work from the break, stress and workload escalated exponentially. Before Christmas, I already felt the sense of impending doom as I planned the big experiments to perform in the new year. Then came two weeks of indulgence in festivities and now, that foreshadowed impending doom is manifesting. All of a sudden, I am not bored anymore. Tasks and responsibilities began to pour upon me like Niagara Falls, and for the first time in a very long time, I feel like I’m being productive, if that is even possible in France.

Since being busy means that I haven’t had much time to go around and take new photos (and in turn, update on time), I will be putting up some previously acquired photos for the next few weeks. Today’s set of photos were taken throughout the winter holidays, and incidentally, these were all taken by my cell phone. You’ll notice that a few of them are related to a Christmas gathering that was held at the Bordeaux Church on December 24th, 2010, of which I was one of the organizers along with my Christian fellowship. Click here for photos of the actual event. 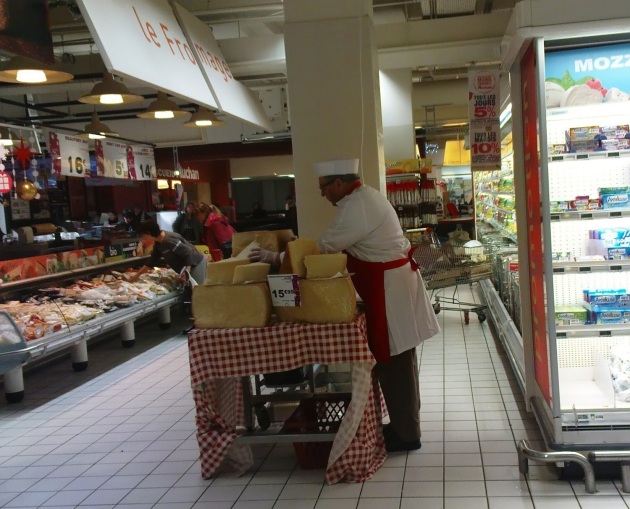 Here’s a guy cutting up cheese at Auchan, the local mega-supermarket. THOSE WERE GIGANTIC HUNKS OF CHEESE! Greatly amusing. This reminds me that maybe I should resume the wine and cheese tasting, the regularity of which has declined since December.

Walking along the tramway towards St. Andrew’s cathedral when the Christmas tree was still around. From afar, the cathedral looked somewhat like a castle from a fairy tale.

Looking down at the spiral stairs from the outside of a friend’s house. The French has a thing for spiral staircases. It is the same with my apartment; you have to climb 60 steps to reach it.

Making pancakes chez un ami, except they are irregularly shaped, possibly due to the slightly slanting table. I particularly liked the shape of the one all the way at the back. I can’t decide whether it’s a snail with a pimple on its shell, half an orange on a banana, or a boa constrictor digesting an elephant.

Cheesecake for Christmas gathering, before being shoved into the oven. This one was nicely marbled, thanks to Sharon! Now I know the trick to marbling, except the pattern it made on the surface caused some cracks during the process of baking. I will have to look into a solution for that. The cake turned out super yummy though and was one of the most popular items at the Christmas gathering. 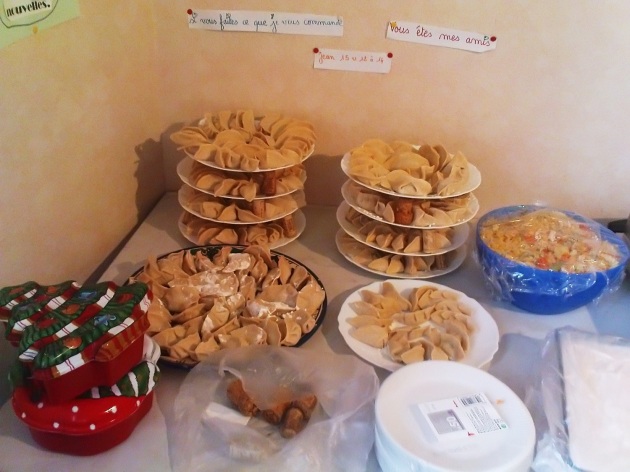 Dumplings…and more dumplings! Yes, we collected corks from wine bottles and used them to prop up subsequent plates in order to save space, a rather brilliant idea.

More preparation for the Christmas gathering. We had well over 70 attendees for this event, a very satisfying yet manageable number.

Looking through an arch at Place Gambetta, before the Christmas lights were torn down.

That concludes the weekly photo show-and-tell, merci beaucoup. On another note, dates to Belgium have been set. Belgium is so close to the Netherlands – I can’t wait for Keukenhof.

6 responses to “Plunging back into work”