And I thought the strike was over

Leave a comment Posted by Annie Bananie on December 19, 2010

Today, Sunday, December 19, 2010, is the third consecutive day of the public transit strike in the city of Bordeaux. Now, I wouldn’t mind if the strike reduced tram and bus frequencies; we’d just be waiting a bit longer and have trams that are more packed than usual. But no. Our dear French friends decided that it would be a good idea to paralyse the public transit system by shutting down 2 of the 3 tram lines. The operating line would have one tram every 15 to 20 minutes. In addition, only about 5 bus lines out of 100 were running. This lasted two days and is continuing today.

Not cool, man, not cool.

The consequence was that I had to walk to work on Friday, which actually wasn’t all that bad. Normally it took 12 minutes or so via tram, so walking only took 35 minutes. However, walking over to Pessac from downtown Bordeaux on Saturday for my Christian fellowship meeting and Christmas gathering rehearsal wasn’t such a great idea. It takes 25 minutes by tram, and it would have taken an hour and a half or more if I were to walk. Uh oh.

Well, a friend came up with the unusual yet brilliant idea of taking the train. Not tram train – the REAL train. It didn’t occur me that there would be trains running from downtown Bordeaux to Pessac, but alas, there were…and it would only take 5 minutes to get there. I still had to do a bit of walking though, as getting to the train station on foot from my house took half an hour, and walking to the meeting place from the Pessac train station took another 15 minutes. Still better than walking for an hour and a half.

So the trip consisted of the shortest train ride I have ever been on, literally 5 minutes from origin to destination. At least SNCF wasn’t on strike at the same time…thank you for being considerate, my French friends.

The week in review: it snowed again, although only for a very short period of time, which didn’t allow the snow to accumulate. Friday at work was the lab Christmas lunch, where a potluck was held. My contribution was, of course, the cheesecake that had been successful last week. There was also a fun gifts exchange, elaborated below. On Saturday we had our weekly fellowship meeting, which took place smoothly despite the traffic interruptions. I brought tea cake to the gathering (pics to follow) – yes, tea cake actually exists, Andrew.

First snow of the year, about a month ago, when I was still staying in Talence. This was enough to halt the the public transit system. It was apparent that Bordeaux is not designed to handle any snow beyond what is shown here – a very delicate city, indeed. Lots of trouble that day… 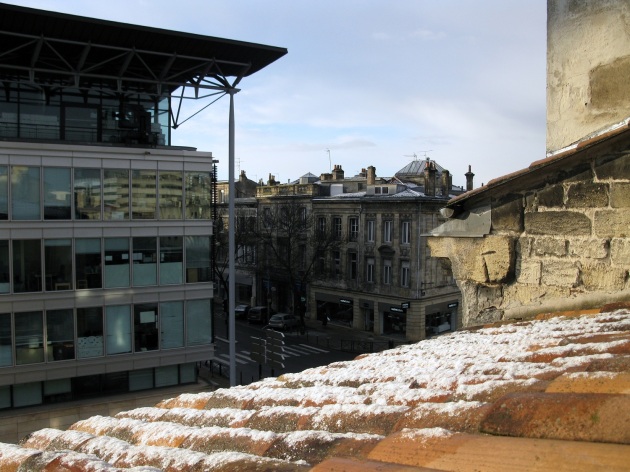 …and it snowed a second time, albeit not much at all. This is the view from my window, taken yesterday right after the snow stopped. Right across from my apartment is the Palais de Justice, which is the building with the giant cones (to the left, and not visible here, obviously) that I showed about two months ago.

The lab Christmas lunch took place on Friday, during which the new lab logo was unveiled. BioTis = Bio + Tissue, and 1026 was our INSERM unit number.

As you can see, there was a lot of wine. I still prefer champagne over red wine, even after having tried more red wine than champagne. Of course, there’s Coke for the non-alcoholics. The colleagues in this photo were more rowdy than usual after having a few drinks, while on this end of the table, we were more quiet and conserved. The food was plentiful, with my favourite being probably the smoked salmon. I did get a number of compliments on my cheesecake though, including “super bon” and “delicieux”. Mission complete.

As for the gifts exchange, each person dropped a small gift (5 Euros maximum) into a huge box, and we had Mères Noël – Mrs. Claus, since Santa was absent or something – distribute them. Yes, someone gifted the yellow and blue shower puffs, which later became a toy to be tossed around.

I received this present, interestingly wrapped in aluminum foil, and my first impression was…bomb?! That, or some gigantic blob of candy. Actually, I liked this design. It was simple and efficient and I found it extremely creative. No sarcasm. 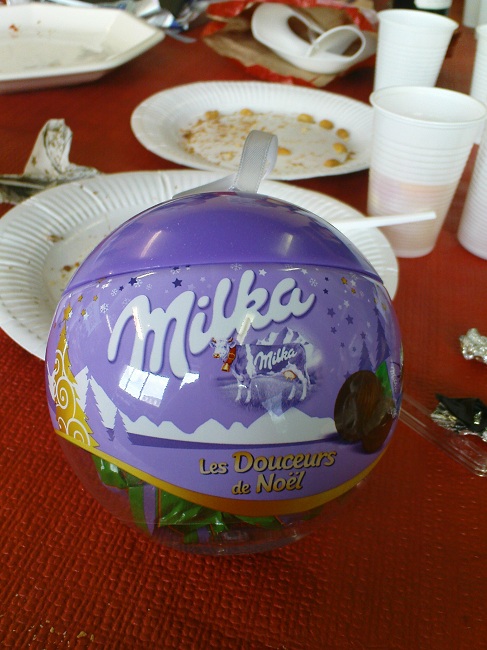 And this is what it really is. I was sort of hoping that I wouldn’t receive chocolate, but I appreciated it anyway, especially since the wrapping amused me so much.

Back at home that night, I embarked on a venture to try out a new recipe – tea cake. (Actually, the original attempt was for a much more challenging recipe, but that failed miserably beyond words, so I resorted to the backup plan of tea cake.) The intention was to make enough small cup cakes for everyone at fellowship the following night and if it was successful, I would be making it along with the cheesecake for next week’s gathering.

The recipe claims to be so easy that “nothing could be easier”, and it was absolutely the case. No skills were involved, you just mix everything and shove it in the oven. You don’t even have to look back at the ingredients once you’ve made it once; everything came in 50s – 50 grams of butter, 50 grams of sugar, 50 grams of eggs, and 50 grams of cake flour. You’d also need one tea bag and approximately 50 grams of hot water, although I prefer the tea to be more concentrated, so I used less. Each batch makes 6 little cup cakes.

Note to self: it probably wasn’t a great idea to put a charging cell phone right beside melted butter. 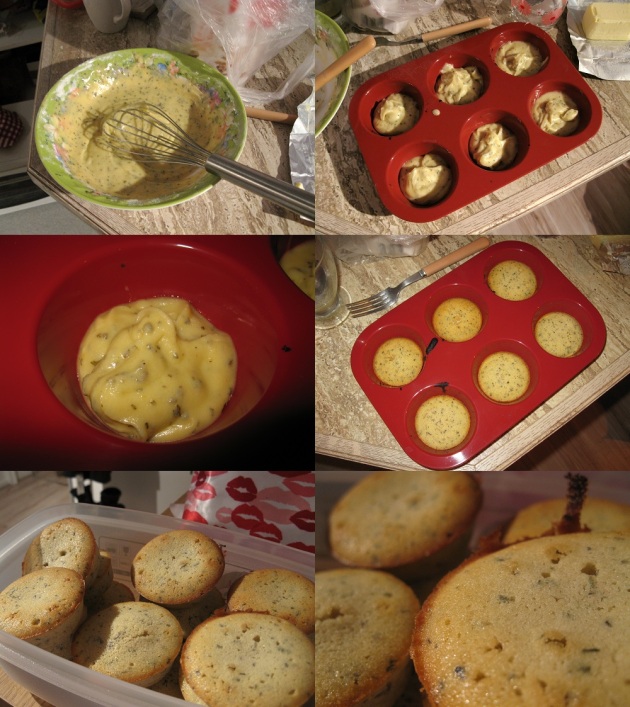 Without a microwave, the only part that took longer than needed was melting the butter. I resorted to immersing a cup of butter into boiling water, and everything else was pretty much smooth sailin’. The batter looked a little like tartar sauce, but the little black dots are in fact the tea leaves extracted from the tea bag.

I don’t have an oven, so I abducted my neighbour’s toaster oven which she offered to let me keep as she seldom uses it. Baking supplies were obtained from a fellowship friend from whom I borrowed an electric beater, a mixing bowl, cake flour, vanilla extract, a weighing scale, measuring spoons, and other bits and pieces. I might eventually get my own set, since it’s probably about time to return these to their rightful owner…

Dinner time at fellowship! This time we had a special contribution of sushi, which was unexpected but SO VERY WELCOMED! Apparently my tea cake was quite popular and it was devoured quickly. To be honest, even I liked it a lot, especially with the added touch of tea. So…I guess this is added to the list of things to make for next week!

Wine and cheese are back this week! I might not be doing this weekly after all. I don’t even know how I managed that before I moved. Maybe it’s because I am actually cooking now, and by the time I finish eating, I am not really in the mood for more cheese. As a result, a block of cheese that I would finish in a week probably takes two weeks to finish now, same with the wine.

In any case, this week I am introducing Chaumes cheese and a 2004 wine from Chateau Bel Horizon.

I chuckled when I read the Wikipedia description of Chaumes. “Its aroma is generated by the cheese’s bright tangerine-orange soft rind and smells of old socks.” Hah. I indeed did not like the smell of the cheese. The texture was similar to that of Port-Salut, the first cheese I ever tried in France. In terms of taste, Chaumes resembled a mix of Port-Salut and Brie, soft and creamy, but not as rich as the tomme noire.

The motivation for getting the wine of choice this week was the name of the chateau, “Bel Horizon”. I’ve always had somewhat of a deep connection with the word “horizon”, so there was no doubt that it was the one. It is also the oldest wine I’ve tried so far, being from 2004. To be completely honest, I still don’t know the correlation between wine year and taste. In fact, I think I’ve noticed more of a correlation between price and taste. I tend to like more expensive wines, which seem to taste sharper and more unique. For example, between a wine from 2004 and one from 2009, both 4 Euros, I taste minimal difference, but between two wines of the same year where one costs 3 Euros and the other 10 Euros, the more expensive one is much more exquisite and memorable.

Of course, this is still based on my very limited experience, and wine experts will probably laugh at me. The process of learning through experimentation is nevertheless fun and exciting.